The birth of our nation, laid by our Founding Fathers, was a carefully-crafted pillar of world history. Unlike any nation before it, America was birthed from the foundations of individualism, property rights, and the opportunity to pursue happiness.

Those same Founders, wiser in political construct than most men at any moment in history, spoke truth to power. A power so transcendent, they still retain their value to this day.

Here is how their words relate to our current Presidential election in 2016, over 200 years later. 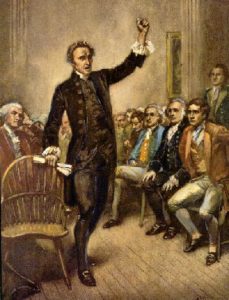 “When the American spirit was in its youth, the language of America was different: Liberty, sir, was the primary object.”

Henry, during the Constitutional Convention debates in 1788, said this line to describe the birth of his new nation. His words still ring true today, as we continue to step away from the “Liberty” Henry describes. The presidential candidates, Donald Trump and Hillary Clinton, both look to government-run solutions to cure the public’s ails. Whether it be with government-run healthcare or a federal minimum wage, both candidates continue the push away from liberty.