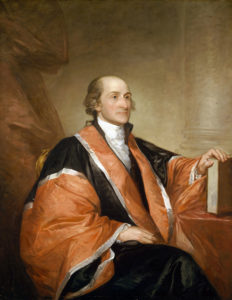 “But the safety of the people of America against dangers from foreign force depends not only on their forbearing to give just causes of war to other nations, but also on their placing and continuing themselves in such a situation as not to invite hostility or insult; for it need not be observed that there are pretended as well as just causes of war.”

John Jay, in the Federalist Paper #4, written in 1787, describes a foreign policy based on non-interventionism, and also one of just action.

In 2016, after years of countless wars, some of which have been unconstitutionally executed, this musing could not ring louder. “Also on their placing and continuing themselves in such a situation as not to invite hostility or insult,” words that no president in the recent past has listen to.

Currently we are stuck with a “wishy-washy” Republican who on one hand has criticized ever entering the war in Iraq and Afghanistan, but speaks hostilely about other nations, and on the other hand is a Democratic neocon who has never met a nation she wouldn’t like to “liberate,” or depose.

Jay’s idea of a strong but respectful foreign policy should be especially heeded, as the Civil War in Syria continues to play out with the potential for a large conflict with Russia.