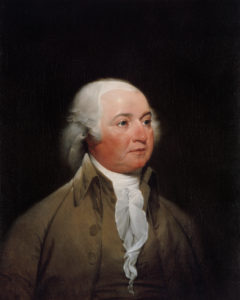 “Fear is the foundation of most governments; but it is so sordid and brutal a passion, and renders men in whose breasts it predominates so stupid and miserable, that Americans will not be likely to approve of any political institution which is founded on it.”

Second President, and important Founding Father John Adams was never shy about expressing his views on government. In 1776, the same year the nation proclaimed its independence from Great Britain, he argued that Americans would never approve of a government built out of fear, since the men who would embrace such an entity would become “stupid and miserable.”

Little did Adams realize that in many elections, and especially in 2016, fear would play a large role in determining the outcome. Ask any voter in 2016 who they are voting for, and almost no matter who they choose, their reasoning is identical. The voter either fears Trump so much that they will vote for Clinton, or they fear Clinton so much they will vote for Trump. And if by the off-chance they are not scared of the candidates themselves, they are fearful of some other scapegoat or blanket statement entity. The worst part of the fear-driven voter is the fact that candidates now play into this fear, running entire campaigns on drumming up any little fear or vulnerability a voter may be concerned with in order to garner that vote. The voter essentially trades their rational thinking in return for perceived safety or understanding.