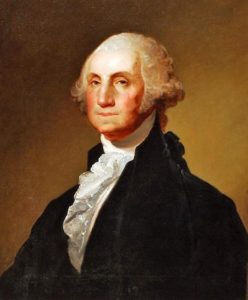 “However [political parties] may now and then answer popular ends, they are likely in the course of time and things, to become potent engines, by which cunning, ambitious, and unprincipled men will be enabled to subvert the power of the people and to usurp for themselves the reins of government, destroying afterwards the very engines which have lifted them to unjust dominion.”

Our first President, and one of few men to ever live who refused a further term to run a nation, George Washington spoke in his farewell address in 1796 to the dangers of political parties.

2016 is the epitome of the warning Washington gave. The rise of Donald Trump and Hillary Clinton within their respective parties are near perfectly described by the line, “by which cunning, ambitious, and unprincipled men will be enabled to subvert the power of the people.” Look at Trump, who has held every political position possible at some point in his life, running as a populist inside the GOP, and is facing large backlash from the more principled wing of the party. His ties to the party are questionable at best, especially since for a long period of his life, he was friends with his now political foe. Then there is Clinton, whose own ambition supersedes any ounce of principle she holds from the Democratic platform. She appears to use her power, garnered through her time in government, to act outside the bounds of a normal citizen, or an honest politician.