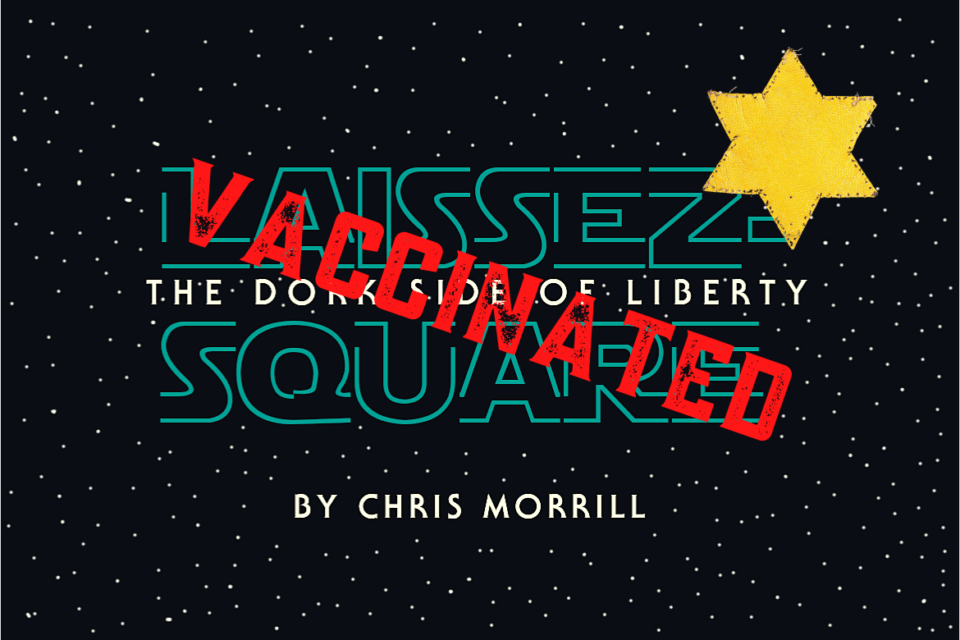 Just when you thought the whole coronavirus thing was almost in the rearview mirror, this week everyone’s gone absolutely berserk over the prospect of “vaccine passports.” The concept: you carry some sort of proof of immunity to COVID-19, and in exchange you can be admitted to certain places or events.

The idea had been smoldering for a while. It has recently exploded in earnest, due at least in small part to certain parties throwing gasoline on that fire.

For example, the Libertarian Party of Kentucky tweeted (perhaps unwisely):

“Are the vaccine passports going to be yellow, shaped like a star, and sewn on our clothes?”

Are the vaccine passports going to be yellow, shaped like a star, and sewn on our clothes?

There are a couple things wrong with that tweet. For one thing, they botched the analogy. The un-vaccinated population would be the allegedly oppressed in their scenario, not the vaccinated. Most importantly, by referencing Nazis and/or the Holocaust, the LPKY invoked Godwin’s Law and thus invalidated any point they were ham-handedly trying to make.

The reaction was, as you might expect, mixed. No less than bong whisperer Seth Rogen (who has probably never set foot in Kentucky) chimed in. This led to the kind of wholesome, civilized debate Twitter is famously known for. Just kidding, it was a melee.

Fuck right off with this shit.

Never one to shy away from a good shitshow, renowned intellectual luminary Rep. Marjorie Taylor Greene (Q-GA), with her usual aplomb, opined that vaccine passports would be “Biden’s mark of the beast.”  Please just kill me now.

I am on the record in a prior piece as being generally okay, in principle, with the idea of a vaccine passport. As long as it is private businesses or citizens asking for it. After all, a property owner has an almost absolute right to determine who comes and goes on their property. Right?

Many times when a business makes these decisions, they are doing so with the imprimatur of government authorities. And if the government isn’t playing a role, their insurance company probably holds significant sway in the matter. The hodgepodge of business requirements (or lack thereof) for face coverings is a decent example of this.

Perhaps a more vexing question, at least from a technical perspective: who’s going to issue these alleged passports? Not the federal government, at least according to some sources. (And even if they try, it’s probably a non-starter.) Will all 50 states (plus D.C.. Puerto Rico, etc.) issue their own separate documents? How about all 3,006 counties in the U.S.? Why not all 14,945 incorporated cities? I mean, what could possibly go wrong?

As also noted in a prior piece, our federal system is both a blessing and a curse when it comes to dealing with stuff like this. Instead of one response to a national crisis, we have scores of wildly differing responses. And perhaps also scores of wildly different vaccine passports. Plus, consider that by the time any of this stuff gets going, the pandemic may be over with anyway.

Are our vaccination cards supposed to also be the passports? Or the primary documentation for obtaining one? Because if so, those cards are ridiculously easy to fabricate, forge, or alter. You might as well use them to wipe your arse in the next toilet paper shortage.

It’s super cute that Staples, Office Depot, and so forth are offering to laminate your vaccine cards for free, but lamination does not make something official. I could laminate my Certificate of Ordination from the Church of the Latter-Day Dude, but that doesn’t make me qualified to serve as Pope.

Their offer of free lamination, however, is convenient for forgers: they can get the card stock, the ink, and the lamination all at one place!

Seriously, if those cards are the cornerstone of all this passport business, then much of this is just for show. One big virtue signal.

What if your immunity comes not from a vaccine, but from having had the virus and then recovering naturally? Will you have to cough up (pun intended) medical records showing that you tested positive at some time in the past? What if you know you had it, but you were never officially tested or treated? Will you have to show proof of a positive antibody test?

Who is going to pay for all this shit?

Are there HIPAA concerns with being compelled to prove to a third party that you’ve had a disease or the vaccine for same?

From a property/casualty insurance perspective, I’m not entirely sure why an insurer would really care what their insureds do vis-à-vis masks or vaccine passports. Everyone’s scared of being sued if someone catches COVID on their property. But outside of severely confined environments like nursing homes and prisons, it is devilishly hard to prove when and where somewhere got infected. So from a tort perspective, I’d like a defendant’s chances in a civil suit on such matters, even with the lower burden of proof. A lot of restrictions businesses are imposing upon themselves arise from an abundance (perhaps overabundance) of caution.

“Why would businesses willfully turn away paying customers?” you might ask. Actually, they do it all the time. People aren’t the only entities that engage in virtue signaling. Businesses do it too, even if it hurts their bottom lines.

For example, many businesses were absolutely delighted to turn away paying black customers in the Jim Crow days. (Think of that as a form of vice signaling.) The whole gist of the Civil Rights Act of 1964 and specifically its focus on “public accommodations” (whether one agrees with that or not) was to remedy that situation. Some folks just don’t want to “bake the cake” on religious grounds. Dick’s Sporting Goods stopped selling guns because, I don’t know, ‘reasons’. Twitter famously banned its highest profile user a few months ago, no doubt decreasing their page views. I could go on.

So yes, some businesses may require vaccine passports just to make their local or state governments happy, to placate their insurance companies, or to virtue signal. After all, we’re all in this together, right? At least that’s what every goddamned television commercial has been telling us for the last year, anyway.

I fear that most of the acceptance of vaccine passports on a person-to-person basis will be virtue signaling as well. The pro-passport people will want to show everyone how they’re being good citizens. (Think Ralph Wiggum saying “I’m helping!”) The anti-passport people will want to show that they’re not “sheeple” and they’re not “scared” while they are out there sucking on doorknobs, having infection parties, or whatever else they do to flex their muscles.

Make no mistake, however: there is some malevolence on both sides.

Some pro-vaccine/passport people will want passports in part so they can punish the anti-vax nutters. How dare they not play along! We’ll show them! It puts the vaccine in its skin or else it gets the hose again!

The malevolence from the anti-vaccine/passport folks is a little harder to sort out. It’s kind of all over the place:

*an argument with which I have some sympathy

I’m tempted to do a Mercutio and just exclaim: “A plague o’ both your houses!”

The problem is that it’s a real plague and both houses probably will get it. How much more posturing goes on between here and the bitter end is anyone’s guess.