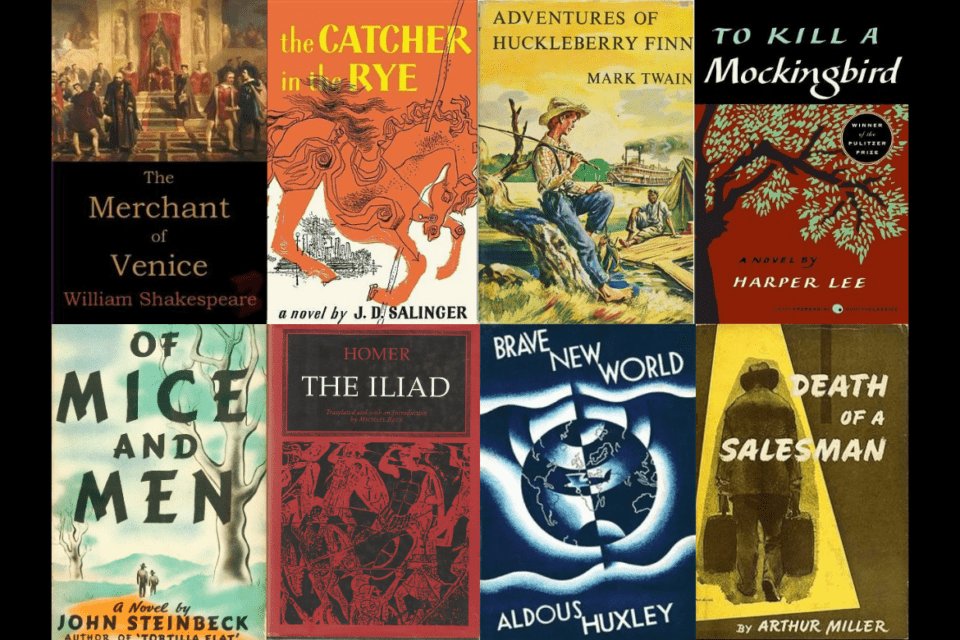 I have a running joke with the homeschool kids I teach in our local high school co-op: every single book I teach in their literature classes has been banned somewhere, sometime, for some reason. Because they’re teenagers, they are always a bit shocked (and not-so-secretly thrilled) to learn they are entering the illicit world of banned and canceled books. Suddenly, “The Merchant of Venice” and the “Iliad”, take on a new, exciting dimension.

After we finish one of these banned classics, someone inevitably asks, “Why was this banned in the first place?”

Years ago, when I first began teaching, books might be banned because they showed characters having sex, swearing, committing suicide, or advocating for communism. Today, those things barely cause a ripple and, instead, books are most often canceled for reasons related to ‘presentism‘—judging the past by the standards of the present.

It’s funny how literature written hundreds or thousands of years ago tends to represent the ideas, views, values, and social structures prevalent at the time.

For instance, Homer lived around the 8th or 9th century BCE, but the “Iliad” immortalized people from the earlier Bronze Age. Whether or not the events of the Trojan War actually happened, the Bronze Age in the Mediterranean was a violent time. Is it shocking that Homer’s Bronze Age characters see violence as a practical way to solve problems? Why are we surprised that Agamemnon and his troops engaged in pillaging and plundering? It’s not like the Argive army had signed on to the Geneva Convention.

When Shakespeare wrote the “Merchant of Venice” in the late 1500s, anti-Semitism was commonplace across Europe. Venetian Jews were forced into segregated neighborhoods from 1516–1797. If Shakespeare set his play in Venice, doesn’t it stand to reason anti-Semitism might be an issue for one of his characters, who just happens to be a Jewish moneylender residing in the city?

Characters who come to life through historic works of literature show the world as it was—not as we’d like it to be.

In Harper Lee’s “To Kill a Mockingbird” (another oft-banned book), Atticus Finch tells Scout, “You never really understand a person until you consider things from his point of view. Until you climb inside of his skin and walk around in it.”

Historians and archaeologists may give us hints about what life was like during the Bronze Age or Renaissance Venice, but outside the realm of speculative fiction it is not possible to visit the past in a time machine as H.G. Wells imagined.

But we can dive into books, plays, and poems that have stood the test of time, and help us understand what life was like.

There’s no way to know what it would have felt like to be part of a Bronze Age army laying siege to another city unless we turn a page of the “Iliad” and climb inside Achilles’ skin for a moment.

There’s no way to pop into a Renaissance Venetian market for the afternoon, so instead we read “The Merchant of Venice” and crawl inside Shylock’s head. By doing so, we begin to see the world from Shylock’s point of view; to understand why he asked for a pound of flesh.

Today’s trend of banning or ‘canceling’ authors and their books simply because those books don’t represent modern day values condemns us to know even less about the past than we already do.

Classic literature gives us the opportunity to gain an understanding of the constants of the human condition. Readers of the “Iliad” come to understand there were wars during the Bronze Age, just as there are wars today that cause immeasurable suffering. Readers of “The Merchant of Venice” learn that anti-Semitism was a problem in Europe long before Hitler’s Germany.

When we read great books written long ago, we heed Atticus Finch’s advice and it makes a difference. I’ve seen firsthand how reading classics increases my students’ level of empathy. They gain an understanding of the unchanging nature of the human condition. My students also come to see how much progress we as human beings have made because, having read about a Bronze Age battlefield or a segregated Venetian neighborhood, they understand where we started.

We should embrace history—not cancel it—so that we are not doomed to repeat it.