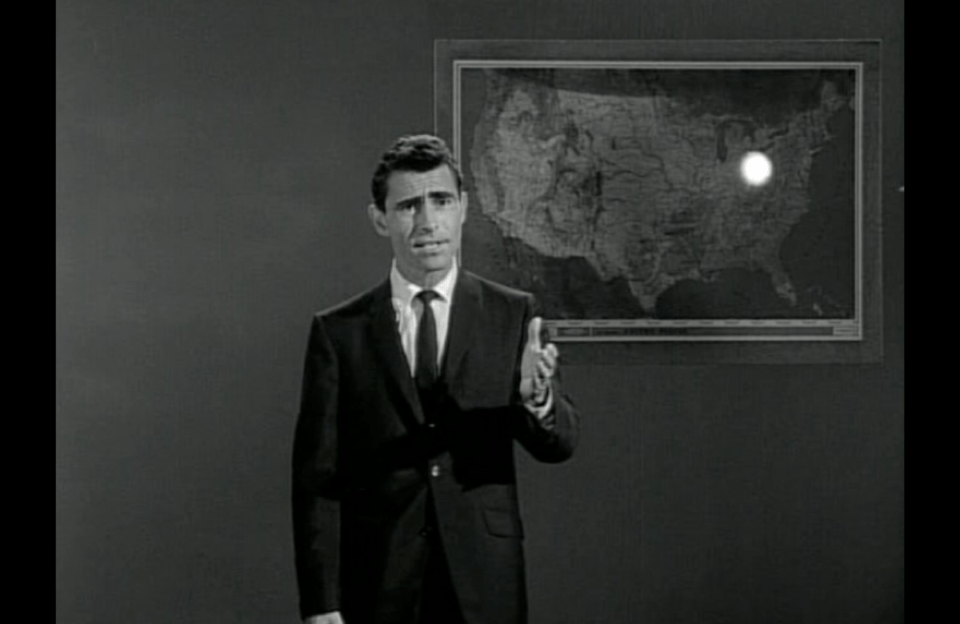 The Twilight Zone (1959–1964), one of the most popular TV shows of all time, takes us on a tour of the imagination. It has no boundaries between light and darkness, real and imagined, or place and time. The Twilight Zone explores people in surreal situations. Every stop gives us insight into humanity; how it descends into darkness or overcomes the challenges of existence. One Kafkaesque story helps us understand why irrational power terrorizes ordinary people.  It even helps us understand why so many ordinary, good people, allow “cancel culture” to grow in influence.

The episode, it’s a Good Life, examines the terror inflicted on people when they live with the fear of their life being immediately canceled by an irrational power. The irrational power is wielded by a six-year-old boy named Anthony. He can wish people and things out of existence, usually sending them into the cornfield. He created his own world by wishing away machines, electricity, and modern conveniences because they displease him. The adults, knowing this monster could wish them away at any time, for any reason, constantly try to please him. They constantly tell him he does “good” and think only thoughts acceptable to Anthony.

One night during a birthday celebration for their neighbor Dan Hollis, Dan has a few too many drinks and starts singing. Anthony hates singing. Fear fills the adults in the room, they can’t move. Anthony gets angrier; telling Dan he is a “bad man, a very bad man.”  Dan, no longer able to restrain himself confronts Anthony calling him a “dirty little monster” and a “murderer.” Dan challenges Anthony to do what he is thinking about doing to him. As Dan and Anthony are face to face, the other adults are standing in the back of Anthony. Dan states he is sick of living in fear. While Anthony is focused on Dan, Dan frantically begs the adults to hit Anthony on his skull with one of the hard objects near the fireplace and “end this (terror) now.”

Everyone is too afraid to move. They all stand and watch as Anthony turns Dan into a Jack-in-the-box with a human head to enhance the horror. Dan’s wife screams hysterically. Anthony warns her she could be next. Anthony’s father begs him to send Dan to the cornfield (to remove the horror). Anthony agrees; all the adults go about their business telling Anthony he “did swell” and “everything is great.”

Cancel culture is today’s irrational monster. Cancel culture removes people and brands from their speech, work, or school platforms for what is asserted to be objectionable conduct. The canceling usually occurs by accusation and the canceled accused has little ability to respond.

While thankfully cancel culture doesn’t have the supernatural power to send objectionable people to the cornfield, it has the power to irredeemably assign guilt, and to banish people and products as punishment. Cancellations have occurred with hosts of television programs, authors have had their books removed from sales platforms, opinion editors fired from national newspapers, movie stars had contracts terminated, advertisers drop advertising if they dislike any comment from a show’s host, teachers are fired for expressing ideas, manufacturers of beans and mattresses are boycotted for supporting unpopular candidates, a U.S. Senator loses a book contract for exercising constitutional rights, and the names of historical figures are removed from schools because hundreds of years ago they had what is now considered a “dishonorable legacy.” George Washington, Abraham Lincoln, Dr. Suess, and Aunt Jemima syrup were canceled. Even a prospective college student was nearly expelled before starting school for objectionable political speech.

The liberal media dismisses cancel culture as old news, asserting for centuries, societies stigmatized that thought to exhibit moral deficiencies. Those canceling believe the people canceled “really deserve it.” Examples include Scarlet letters, the use of the guillotine in the French Revolution, and torture in the Spanish Inquisition. So, today’s cancel culture is mild by historical standards; it is, merely a consumerist verb, noting someone or something is unneeded or unwanted.

Liberal media, however, misses the point. Historically, canceling was inflicted by despotic governments or mob rule. Today, canceling is being inflicted by a combination of self-righteous people, lap-dog corporations, and Big Tech to control the speech and thoughts of people in a constitutional Republic. Canceling is a tool that allows one side to claim a monopoly on virtue and to label other citizens as perpetually evil merely through accusations. Recently Andrew Michta noted, “Democracy cannot survive in a society in which winners and losers are adjudicated arbitrarily according to criteria beyond individual control.” If cancel culture continues to grow, it will morph into despotic rule.

The radical Left wants more than to silence opposing views. It seeks absolute control over “We the people.” In “Public Shaming Has Only Just Begun,” the author writes: “And if we deploy shame strategically – to single out the most egregious offenses and neglect – we might even send some people to prison.” The true goal of the Left and its friends in Big Business and Big Tech is to meld mob rule with government power to subject individuals to the all-powerful state. The Left firmly believes no individual has a right to oppose the state which they will control.

Read the actual words of the radical Left. It hates humans, capitalism, and freedom. Read the 1619 project that rewrites the history of America. Compare the TASS (Russian news service) depiction of the U.S. with the leading books written by the Left which characterize the U.S. as a racist, crime-ridden, poverty-stricken country.

Except for some commentators on conservative news channels and a handful of politicians, the citizens of the U.S., like the characters in It’s a Good Life watch silently as the cancel culture monster threatens to send any of us to the cornfield if we don’t obey and think “good thoughts” about it.

America, the signposts up ahead indicate the next stop is the Twilight Zone. If we go there, every democratic belief the U.S. holds true will be turned upside down. Dogma, punishment, and the lack of individual rights will prevail. Out of fear, falsehoods will be gladly accepted. America does not need to enter the Twilight Zone. We do not have to lie to ourselves just to live. We do not have to tell the cancel culture monster “it did well.” Since silence will ensure we are sent to the cornfield, each of us must confront the cancel culture monster at every opportunity. The repetition of free speech in defense of the speech of others will slay the monster.

Steps You Can Take to Stop Phone Scammers

How to choose the right kind of gambling games