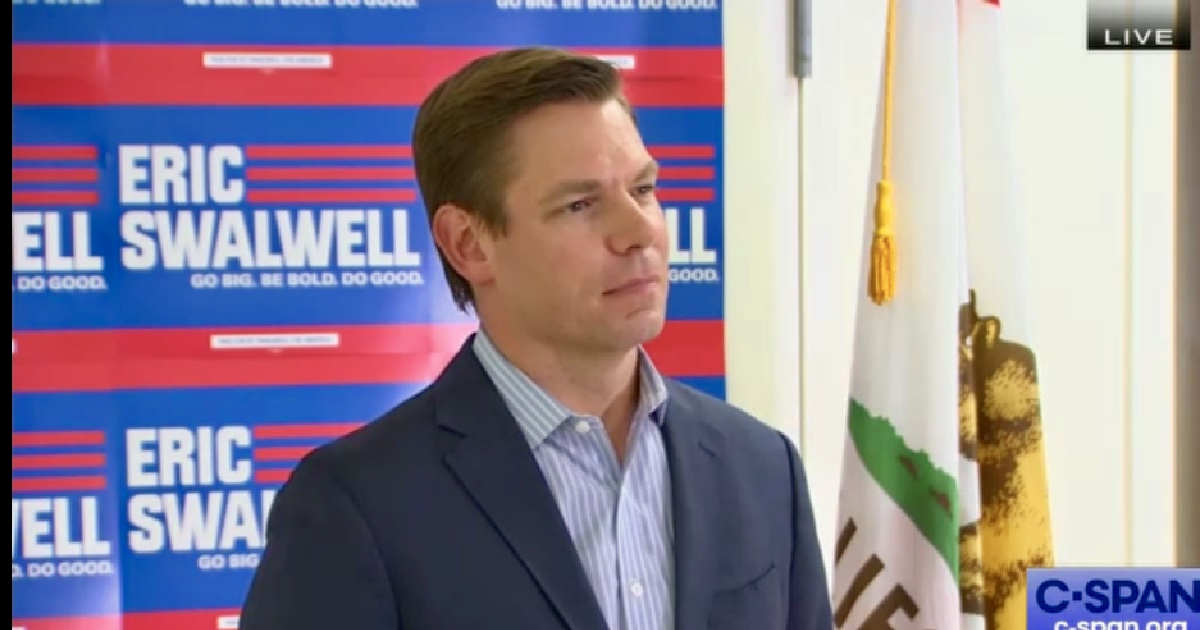 Eric Swalwell is the Democrat this site seems to love to hate. Or at the very least, to mock.

A few days ago, Caleb Shumate covered Swalwell’s internet poll, fishing for support for his gun ban/buyback proposal, pointing out that you can’t “buy-back” something that was never yours to begin with, and calling him a “gun grabber who wishes to restrict man’s natural right of self-defense.” The final results of Swalwell’s poll, asking if America should endorse his plan?  21%-“Yes, Australia already has!” to 79% -“No, we love Guns > kids”.

In May, Swalwell got into a twitter exchange with our site’s founder, Austin Petersen, where he called Austin a “troll” for supporting gun rights. In the ensuing exchange, Swalwell was, in the words of Squiggly Line Guy, “McNuked”.

Also in May, when Swalwell lamented that the word “Woman” isn’t in the Constitution as proof of institutionalized sexism, he needed to be informed that neither was the word “Man”.

In April, we were critical of his proposal to lower the federal voting age to 16, and in December about gun control. Most famously, we covered his thinly veiled threat to literally nuke sections of America that would resist government action on gun confiscation nearly a year ago.

I’m pretty sure we cannot take credit for him dropping out today, or his inability to ever get above roughly 0% in any polls.

We can’t take credit for Democratic primary voters just not being that into him… after all, they’re likely not into us, either.

After barely making the debate and being tied with candidates whose names nobody even recognizes, he failed to make any real impact – even with jabs at Biden for being old as the best attack he could muster.

Swalwell may be young, but he’s not the only one.  Nobody seemed to care, and he had nothing else to distinguish himself outside of his staunch opposition to the second amendment.

Banning guns isn’t free stuff, and being young isn’t unique to him with candidates like Buttigieg, Gabbard, and Beto.

In his concession speech, he primarily lambasted gun ownership while again equating it with not caring about the death of children. He conceded the reality that he simply couldn’t compete in the polls or on fundraising. “The polls have had their way,” he stated at one point. Specifically, he said he saw no way to make the thresholds of the September debates. As for his future? He seems to simply be focusing on his role in Congress and using that to advance his issues, such as gun control, climate change, and student debt.

He refused to endorse anyone, but suggested he might endorse a “young” candidate, such as Megan Rapinoe if she were to enter the race, who will focus on the “next generation”.