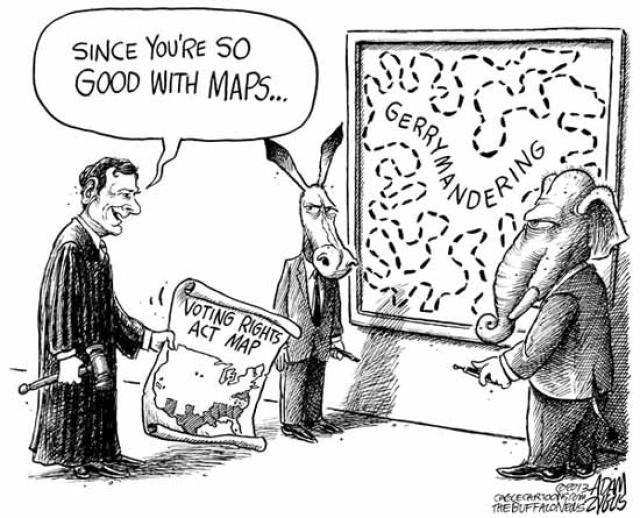 A coalition of Republican voters made a pair of bold requests while asking the Supreme Court to uphold a lower court ruling striking down a Democratic gerrymander in Maryland.

Their case, one of several pending before the justices on this topic, could clear the way for greater judicial scrutiny over redistricting. The Supreme Court has yet to find partisan line-drawing, called gerrymandering, unlawful.

“The practice of partisan gerrymandering — aided in modern times by sophisticated software and the most detailed troves of data imaginable — is at war with [our] system of government,” the Republican motion reads. “It aims to insulate those in power — those whom the public has taken into their trust — from being held to account. Its purpose is to reduce the franchise to a charade — a meaningless exercise, the outcome of which is preordained by computer scientists and political consultants turned cartographers.”

In an aggressive move, the plaintiffs are asking the Court to summarily affirm the lower court, meaning they want the justices to uphold the lower court decision without briefing and oral arguments.

Should the Court decide to take the case, the plaintiffs also asked the justices to schedule their argument on the same day as a related partisan gerrymandering case arising from North Carolina.

Doing so, the plaintiffs wrote, “would ensure a broader spectrum of legal arguments and a more substantial combined factual record upon which to consider the issues presented in the appeals.” The filing notes Justice Stephen Breyer made such a proposal during oral arguments in March.

Both requests from parties before the Court are uncommon.

Following the 2010 census, former Maryland Gov. Martin O’Malley and other state officials conspired to produce a new district map which maximized Democratic representation in Maryland’s congressional delegation. To that end, they folded tens of thousands of Democratic voters from Washington, D.C.’s affluent suburbs into the state’s sixth district, a rural Republican stronghold. Simultaneously, thousands of GOP voters were removed from the sixth and placed in the neighboring eighth district.

As expected, GOP Rep. Roscoe Bartlett lost his 2012 re-election campaign in a landslide to Democrat John Delaney, who is now mounting a presidential bid for 2020.

Republican voters within the sixth district sued, arguing this gerrymander was unconstitutional. The plaintiffs say that state officials intentionally changed the composition of their district to diminish the power of their votes as a punishment for electing Republicans to Congress. This burden on their representational and associational rights, they claim, violates the First Amendment.

Their case reached the Supreme Court last term, but the justices returned it to the lower court on a procedural point. That lower court found in favor of the Republican voters in November, and ordered state officials to redraw the boundaries of two congressional districts — the sixth and the eighth — in time for the 2020 elections. Maryland then appealed to the high court.

It’s not yet clear when the justices will consider Maryland’s request.