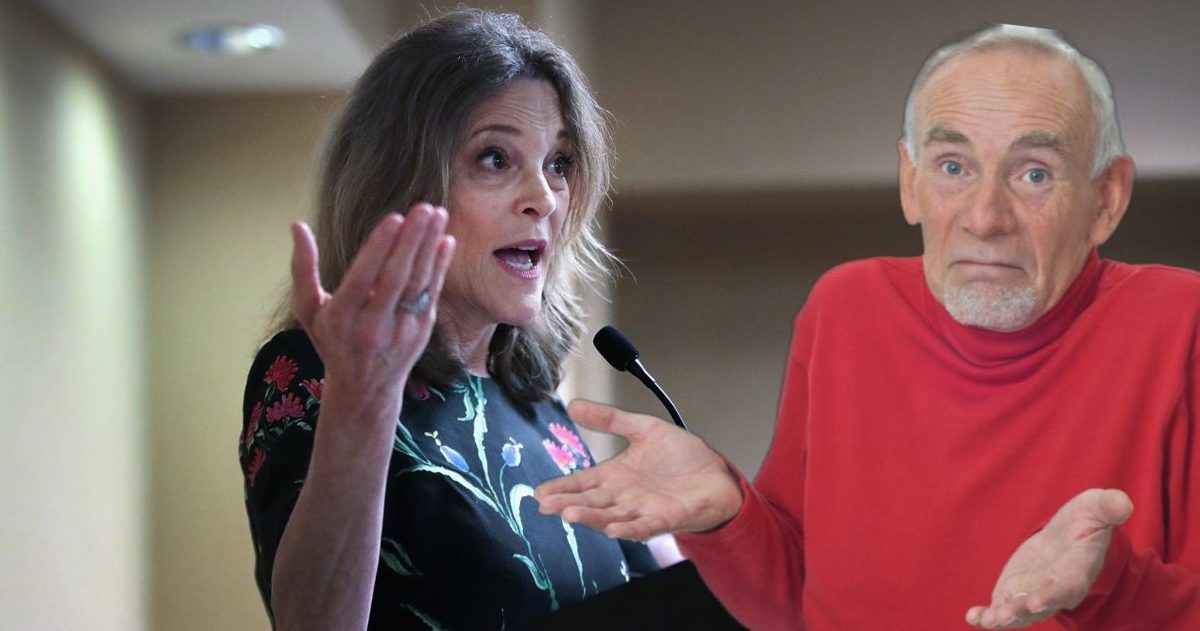 Marianne Williamson has drawn a lot of attention and scrutiny for her new-age spiritual arguments disguised as politics.

Whether it’s the portion of the last debate where she talked about harnessing the power of love for political purposes, the importance of meeting with the Prime Minister of New Zealand as her first official act as President or the series of bizarre tweets that I would have appreciated more back when I smoked.

Williamson may not be the nominee, but she has effectively become a meme, and there’s even a Republican lead effort to keep her in the debates.

I, for one, find her particular brand of eccentricity refreshing, amusing, endearing, and even enlightening at times. She is the Democratic candidate most likely to accidentally stumble onto a point from time to time. Occasionally, she’ll even drop a sincere half-truth before fumbling the follow-up.

One of her recent tweets read:

“As the 21st Century unfolds, it’s time to completely debunk economic theories left over from the 19th and 20th. Value does not derive from labor; it derives from self-actualization. Everything we do to help people express themselves at a higher level puts value into the economy.”

Now, I don’t know whether or not Williamson could pick the definition of the labor theory of value out of a lineup. I don’t know whether by self-actualization she means some kind of objectivist notion of picking goals and achieving them as a means of defining one’s self and purpose, or if she has in mind meditating really hard on the supposed evils of capitalism and conflict.

How vague such pronouncements are only seem to increase their value. She is gold, and I hope she never changes.

However, many people overlooked a point Williamson made during the first debate. The subject was immigration, detention, and the conditions within the migrant camps. The context, in this case, can be disregarded for what may be a larger, more important general point.

“If your government does it, that doesn’t make it less of a crime. These are state-sponsored crimes.” Williamson said, in a moment of clarity.

Now, technically she isn’t exactly right. A crime is an “unlawful” act punishable by a state or other authority. The word “unlawful” is, as we know, the one word that makes abortion and warfare not murder. It’s hard to label something the government allows as a crime, technically, and I’ll admit I’m usually a bit of a stickler for semantics.

It’s said of Donald Trump that his opponents took him literally but not seriously while his supporters took him seriously but not literally. Given Williamson’s over-reliance on vague metaphors and stretched connections, I think the same could be said of her.

The fact that being a crime necessitates a government designation is part of her entire point, even if it could be worded more accurately.

Government decrees that all of its wars are legal, but evading the draft and burning little slips of paper is not. Segregation was at one point not just legal, but federally mandated. Rosa Parks picking the “wrong” bus seat was illegal. The holocaust was legal, while hiding Jews in Germany was not. Slavery was once legal in this country, while the Underground Railroad was a criminal enterprise.

Illegality not equaling immorality is a lesson that both major sides of our politics could learn a thing or two from. What Williamson had been addressing was related to immigration, and issue that many Republicans in particular approach from a stance of “I only have a problem with illegal immigration”, implying those immigrants struggling to provide the best life for their families were wrong, not for committing a sin, but for breaking a law. Democrats, while decrying this sentiment and blue laws regulating morality from a Judaeo-Christian genesis, have their own blue laws on everything from gun restrictions to Big Gulp drinking cups to cigarettes to gasoline to straws to plastic bags and the list goes on.

The truth, as usual, is simple and denied by design.

Now, there may be exceptions to this analogy. Governments, after all, aren’t individuals and no longer really even represent them in a meaningful way. There may be a difference between sharing a secret about an embarrassing event in your friend’s life and sharing the plans to produce nuclear weapons. Some wars, such as defensive actions, are just or inevitable. In the pursuit of war, some amount of civilian casualties may be inevitable, even if those civilians weren’t aggressors themselves.

But as a general rule?

The golden rule should, when possible, apply to the government. Don’t hurt people, and don’t take their stuff is applicable as much as it can be to individuals, groups of individuals, and governments as a moral truth of sorts. It’s a pretty universally agreed upon concept, at least in the abstract.

Williamson may have stumbled onto this important underlying fundamental of libertarianism, even if she doesn’t apply it consistently or recognize how far morality actually can reach.

“Colt Made Me Equal”: A Disabled Libertarian’s Case For Gun Ownership