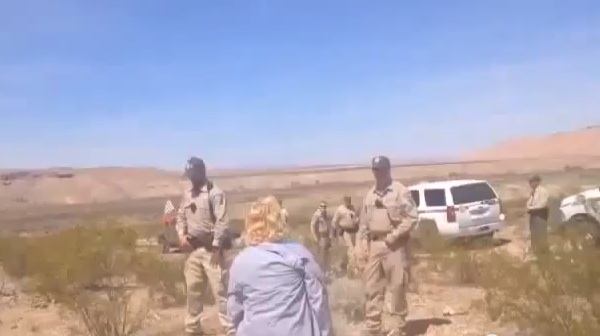 BUNKERSVILLE, NV–We previously reported at The Libertarian Republic on how rancher Cliven Bundy in Nevada is at war with the federal government for not abiding by their laws. Now, people are flocking to the 600,000-acre spot called Gold Butte, where federal agents are currently seizing Bundy’s cows for grazing “illegally”.

There’s been little media coverage of this astounding act of patriotism. Supporters include neighbors, friends, and even some militia groups from other states. Bundy’s plight has rallied those who value liberty and freedom, and the video below reveals their frustration with the federal government’s involvement in Bundy’s case.

The group approaches federal rangers that have been circling Gold Butte and began verbally lashing out at the men. One woman shouts at the federal agents, “I guess you’re gonna march us to the gas chambers too because it’s doing your duty? …What in the hell is money worth to you guys? Freedom!” The group told the agents they were trespassing on their land, calling them “puppets” and “the king’s army.”

The name calling had the desired effect as the agents left the scene looking embarrassed. The government is continuing to round up Bundy’s cows, and Nevada Governor Brian Sandoval is not pleased.
“No cow justifies the atmosphere of intimidation which currently exists nor the limitation of constitutional rights that are sacred to all Nevadans,” Sandoval said in a Tuesday statement. “The BLM needs to reconsider its approach to this matter and act accordingly.”

Yesterday, the federal agents appeared to step up its game, and tasered Bundy Ranch supporters, as well as throwing a woman with cancer to the ground. So far, the increased force has only rallied Bundy’s supporters more, and thus far the agents have turned tail when met with these very vocal protestors.

[about_faith]
The Libertarian Republic is giving away a replica of George Washington’s flintlock pistol. Click here to learn more and enter your email for a chance to win a model of our first president’s beautifully engraved firearm. Or simply enter your information below and you’ll be registered!

7th grader suspended for twirling pencil “like a gun” (VIDEO)

It’s Time For State Legislatures to Take the Power Back