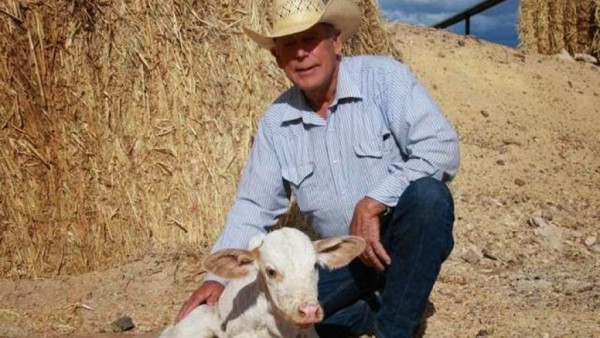 BUNKERVILLE, NV–Rancher Cliven Bundy, 67, is a father of fourteen children and owns a 150-acre ranch in Nevada. His herd of cattle graze in an area called Gold Butte, which is currently under the control of the Bureau of Land Management. In 1998, BLM outlawed cattle grazing in the area to protect the environment for the endangered desert tortoise. Bundy quit paying his fees in 1993 to the BLM and subsequently ignored the rule, which has been inciting the ire of the federal government for 20 years. Now, it appears the showdown has reached its boiling point.

The Center for Biological Diversity allegedly threatened BLM with a lawsuit in federal court if they didn’t force Bundy’s cattle off the public land. Spokesman Rob Mrowka said,“Despite having no legal right to do so, cattle from Bundy’s ranch have continued to graze throughout the Gold Butte area, competing with tortoises for food, hindering the ability of plants to recover from extensive wildfires, trampling rare plants, damaging ancient American Indian cultural sites and threatening the safety of recreationists.”

The lawsuit is more likely an act of desperation for a floundering cause. Towards the end of last year, federal funds began running out for the Desert Tortoise Conservation Center. The group designed to protect the desert tortoise is now having to deal with the fact that their site is set to close in 2014. 1,400 tortoises are at the center, and have been cared for by them since 1990, when the animal was added to the endangered species list. In preparation for the center’s closure, hundreds of the turtles will be euthanized.

So in the name of protecting a tortoise that the government was set to kill anyway, armed federal rangers and agents have circled the 600,000 acre area of Gold Butte, and have paid a private contractor $1 million to round up Bundy’s cattle, which are grazing there “illegally”. BLM released a statement that seizing the cattle was, “an option of last resort.” However, Bundy refuses to submit to a law that he doesn’t feel obligated to recognize.

In an interview with News 8 in Nevada, Bundy stated, “My forefathers have been up and down the Virgin Valley ever since 1877. All these rights I claim have been created through pre-emptive rights and beneficial use of the forage and water. I have been here longer. My rights are before the BLM even existed.”

Supporters of Bundy have been limited to two fenced in “Free Speech Zones” if they want to protest the government’s actions, and another area miles away off the highway is where the media is allowed. “This has become a police state, and this is an example of it right here,” Bundy said.

The level of force being used in this case is staggering. Bundy told FoxNews.com, “They got helicopters flying low. They got snipers around the ranch. Our access to public lands has been blocked.” Bundy is unsure how far the federal government is willing to go to enforce this law, but he’s determined to be the last man standing.

“Years ago, I used to have 52 neighboring ranchers. I’m the last man standing. How come? Because BLM regulated these people off the land and out of business.” Bundy has attempted to pay fees at the local level, but is “not going to pay money for the wrong landlord.” He believes liberty and freedom are at stake. “The federal government has seized Nevada’s sovereignty, Nevada’s statehood. They have seized Nevada’s laws and our public land.”

BLM stated that they, along with the National Park Service, have “made repeated attempts to resolve this matter administratively and judicially.” That argument doesn’t hold much weight as Bundy has been doing the same thing for just as long. “I’ve fought this thing legally. I’ve fought it politically. I’ve fought it through the media. and I will fight it on the ground if I have to,” Bundy said.

This isn’t the first time the federal government has forced violent standoffs to assert their sovereignty. A conflict between the Bureau of Alcohol, Tobacco and Firearms and a Christian sect known as the Branch Davidians resulted in a 51-day siege. The ATF believed the group was hoarding illegal weapons and attempted to serve a search warrant. The incident ended in a blaze that killed 76 men, women, and children. Although Bundy fears this could result in another Waco massacre, he won’t fold.

Community Rallying Around Teacher Who Got In Fight With Student (VIDEO)

Give Me Liberty, or Give Me Corona!

Opinion: God, Not Government, Is the Author of Freedom