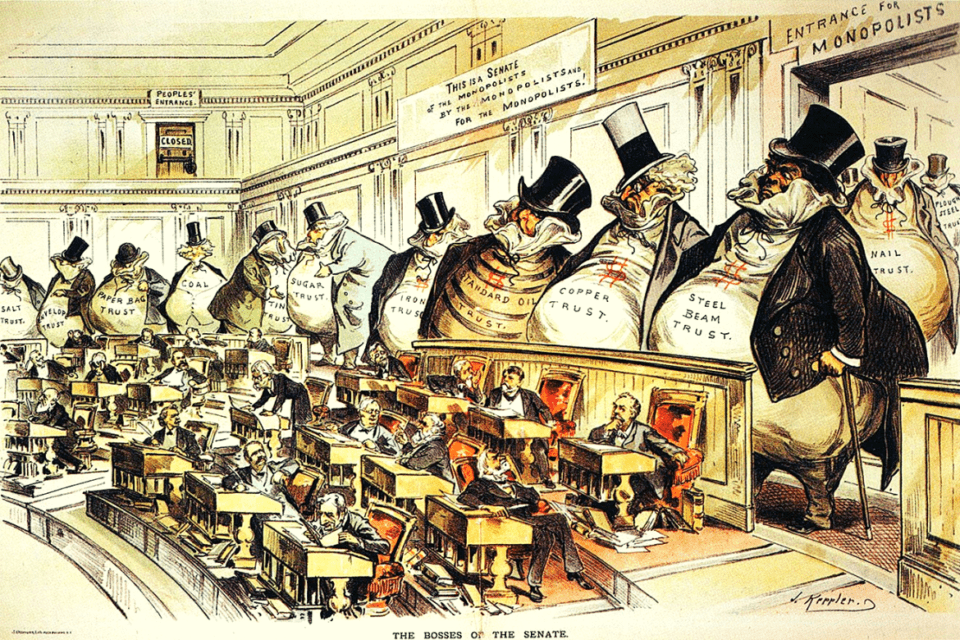 Do not forget what we were meant to be. We were meant to be the United States of America—a conglomeration of states, representing their people and interests. All too often we find ourselves in a situation where people do not even consider the states, and even see them as an obstacle to progress.

“Progress” no longer means that which benefits society. Today, it is just another political slogan used to appeal to emotion. This is often effective, and the people using it now wield power over individuals both at home and abroad.

What should be obvious to anyone is that this “progress” is instead an infringement on rights. These representatives of “progressivism” cater to special interests while giving no credence to broader utilitarian motives. The Federal Reserve, the Department of Education, minimum wage laws, and a host of other major agencies and regulations all serve a specified purpose that do not consider the interests of the people.

Here is where our federal checks and balances should come in, but with the rise of the administrative state and a deferential judicial system, nothing really stands in the way of unconstitutional procedure. What is left to defend what little liberty we still have? The answer lies with the states.

“I served as Alabama’s attorney general. I’ve witnessed the power of state attorneys general when they unite to defend the Constitution and rule of law against edicts from executive-branch officials and fiats of unelected bureaucrats. State attorneys general have pushed back on the federal government’s clear overreaches in the Affordable Care Act’s contraceptive mandate, the Clean Power Plan, and the Waters of the United States rule when they threatened Americans’ liberties.”

What Strange explicitly explains is the ability of states to limit the expansion of the federal government. This is directly in line with historical precedent as well. Numerous accounts by founders and states’ actions assert the authority of states to deny an imposition of federal authority. Thomas Jefferson directly implies this in his Kentucky Resolutions (1798), contradicting the Alien and Sedition Acts:

“That, therefore, the act of Congress of the United States, passed on the 14th day of July, 1798, entitled “An Act in addition to the act entitled An Act for the punishment of certain crimes against the United States,” which does abridge the freedom of the press, is not law, but is altogether void, and of no force.”

This is one of the most direct forms of state autonomy espoused. If a law is unjust, fight it and nullify it. Logically, this makes perfect sense. In any other political setting, there are instances that call for action that directly contradict full enforcement of the law, such as decriminalization of drug use.

Major gains in overarching freedom can only be made by states utilizing their potential. People can now be governed as they choose. The people of California can run their state as they see fit, and the people of Florida can do the same. Bringing political power closer to the people and lessening centralized control can do wonders for liberty in the United States.

The next step after states assert their own autonomy is taking back powers originally given to them in the federal constitution. States are currently an opposing faction outside of the federal government, attempting to maintain ground rather than influencing federal policy. The Senate was designed deliberately to prevent this phenomenon. Senators are meant to be state delegates, representing the interests of their respective states.

Senator Ben Sasse (R., Nebraska) has openly called for the repeal of the 17th Amendment to restore the senate as the greatest deliberative body in the world:

“Repeal the 17th Amendment. Ratified in 1913, it replaced the appointment of senators by state legislatures with direct election. Different states bring different solutions to the table, and that ought to be reflected in the Senate’s national debate. The old saying used to be that all politics is local, but today—thanks to the internet, 24/7 cable news and a cottage industry dedicated to political addiction—politics is polarized and national. That would change if state legislatures had direct control over who serves in the Senate.”

The states have a right to influence our political discourse, and it is absurd that one representative or unelected bureaucrat has more to say over massive policy change than the rightly elected governor or state legislature of a given state. People deserve to be close to decisions that will affect their lives.

Washington D.C. is not the country at large, and has little in common with the 50 states. People should be able to have confidence that decisions are being made with their interests in mind. They should know that their state policies and their own elected representatives in state governments are not being antagonized or overruled by politicians with little to no knowledge of their individual state’s problems and concerns.

It’s time to take the power back from the federal government and put it where it belongs—in the hands of the people and their states.

Hemp Is Forever Changing Its Little Corner of the Economy