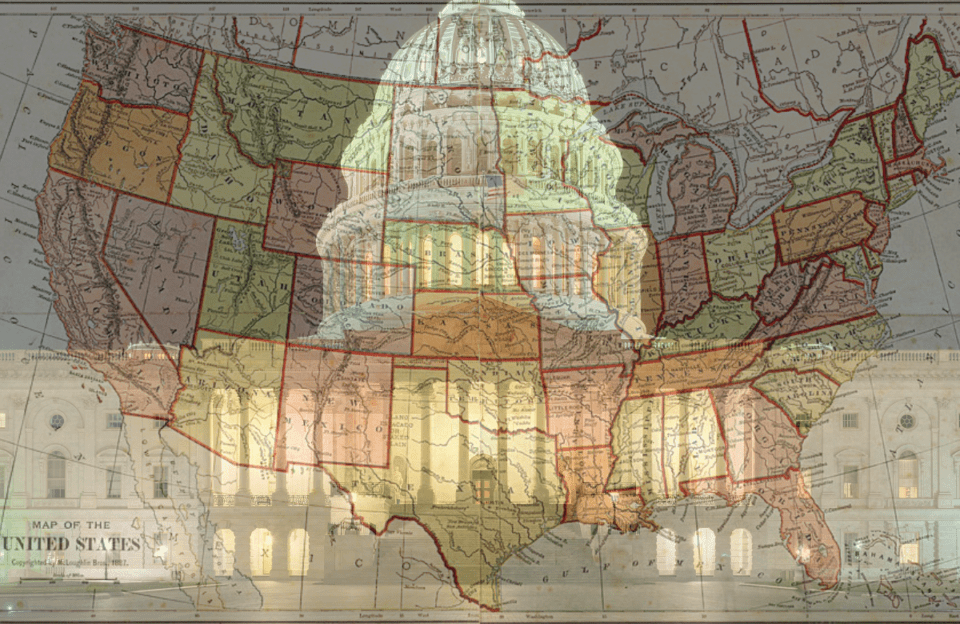 Part III of the series “Can the U.S Unite? If not, How Does It Divide?” addresses how the federal government, over a century and a half, amassed power by diminishing state sovereignty. It achieved this outcome by systematically manipulating the vagueness of the Constitution to eliminate the few constitutional restraints on its power. Now as the sole ruler of the nation, the lack of any check on federal power is resulting in national decline.

States retain the Constitutional right of self-government until feds diminish it.

While the North’s victory in the Civil War settled the supremacy of the Federal government over states on the issues of civil rights, the right to vote, and the application of the Bill of Rights to the actions of states, the federal government has dramatically expanded its powers over states and persons using other vague provisions of the Constitution never intended for the federal amassing of power.

So, while the U.S. Supreme Court may hold a state does not lose its distinct and individual existence, or its right of self-government by being part of the Union, such belief is a pure illusion. Other than the rights protected by the Bill of Rights and the three Civil War Amendments, the only other protections citizens have against the federal authority are those given us by legislation, and those protections can easily be repealed by Congress, ignored by the Executive or struck down by the courts.

A few examples tell the story of the incredibly shrinking power of state sovereignty and their ability to protect the freedom of citizens.

Direct Election of Senators: Perhaps the most significant change in the federal-state relationship, other than the Civil War Amendments to the Constitution, is the direct election of Senators, adopted in 1913 by the 17th Amendment to the Constitution. Prior to 1913, state legislatures elected Senators. While the direct election of Senators is a democratic change, it dramatically changed the power structure of the nation.  A Senator elected by a state legislature is accountable to the state. Senators elected by the people are independent, representing themselves, their political party, and large financial contributors. For Senators elected by the people, service to their state is merely a pleasant, fleeting campaign thought on the road to the “presidency”.

While the federal government remained small in size and authority, the power of states was not frequently questioned. When the federal government sought, during the Great Depression, to greatly expand its powers to implement the New Deal, the limits of federal power became a Constitutional issue. The question of the extent of federal power first arose when the Department of Labor sought to regulate wages. States argued wage regulation was not enumerated in the Constitution, therefore, it was not a federal function since, under the 10th Amendment, such power rested with the states.

Unfortunately for the states, a unanimous Supreme Court, in United States v Darby, (1941) stripped all meaning from the 10th Amendment. The court held the 10th Amendment was merely a “truism” since the substance needs are determined by what powers are delegated to the federal government from any part of the Constitution.  In Darby, the court held the federal government has the constitutional power to regulate wages under the Commerce Clause. This holding ignited the massive expansion of federal power.

The Ever-Expanding Commerce Clause: Using the powers granted under the Commerce Clause of the Constitution, “to regulate Commerce with foreign nations, among the several states, and with the Indian tribes,” the Supreme Court sanctioned the massive growth of what has become the Administrative State. The federal government can now reach almost every activity in the nation, i.e., labor, environment, securities, even children’s toys, and the treatment of animals. The federal government issued 190,000 new regulations (which are laws) between 1976 – 2017 and passed so many new federal laws, no one knows how many.

The Supreme Court did not strike down a single federal law expanding federal power between 1937 to 1995. In 1995, it finally struck down a congressional enactment involving the possession of a gun in a schoolyard. The question was whether one gun so sufficiently impacted commerce that the federal government could regulate it. The court found, that the possession of a gun, did not substantially impact interstate commerce. The Supreme Court struck down another case involving violence against women, as being intrastate, not interstate, commerce in nature. After minimally limiting federal power, the Supreme Court returned to rubber-stamping all future congressional enactments.

Any gaps in the feds’ power over the states are easily filled by bribing states.

Prior to the pandemic, the federal government made $533 billion in grants to states in 2018, about 30 % of state budgets, to implement federal programs. With federal Pandemic funding flowing into state budgets, by hundreds of billions of dollars, States are now under more federal control than ever before.

Only a few superficial limits on federal power over states.

It appears there are only two marginal limitations on the extent of federal power over states. First, the feds cannot regulate purely local activity however, even this limitation is questionable. The Supreme Court has even found the production of agricultural products grown for personal consumption during the depression and marijuana grown for personal medicinal use, have cumulative impacts on commerce, as such could be subject to federal regulation.

A second limitation on federal power, it cannot commandeer state personnel or resources for federal purposes. To get around this limitation, the federal government merely bribes states with tax dollars likely sent to DC by the states.

Links to:  Part I and Part II