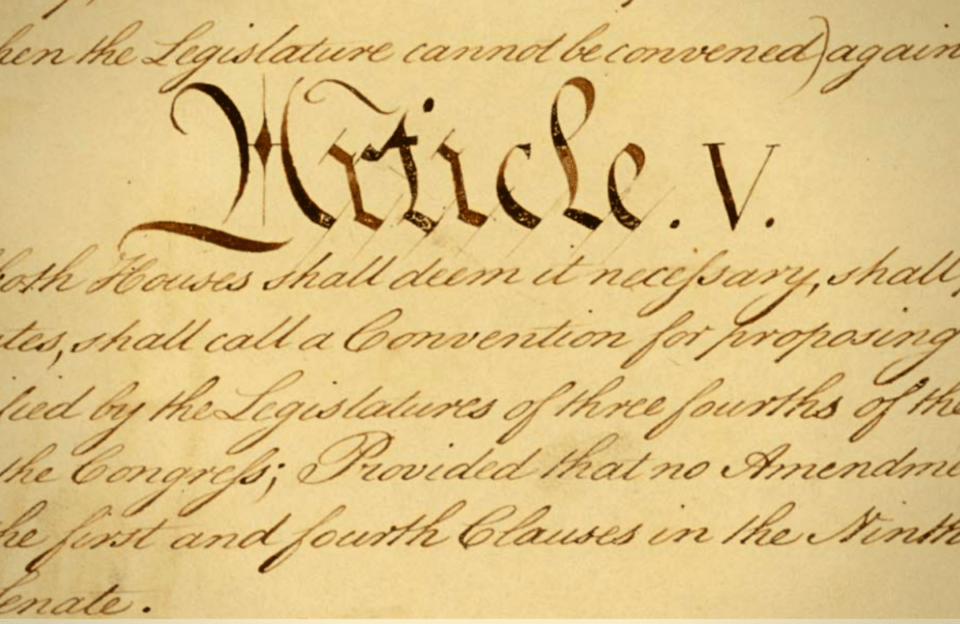 This Part V of “Can the U.S. Unite, if not, How Does it Divide? discusses the options available to states to restrain the continuing amassment of federal power that diminishes the role of states and citizens in the Union. As discussed in Part IV, our Constitution designates state legislatures as the last guardians of the Republic. Failing collective state action, individual states can protect the personal liberties of their citizens.

Unfortunately, for a century and one-half, all three branches of the federal government have accumulated power at the expense of the states. To control this federal overreach, Article V of the Constitution delegates to State legislatures the right to amend the Constitution by calling for a Constitutional Convention.

While a Constitutional Convention has never been approved by the states, it is a viable option. Under Article V, upon application of the legislatures of two-thirds of the several states (34), Congress must call a Convention for the purpose of proposing amendments to the Constitution. If the Convention’s proposals are ratified by three-fourths of the states, those Amendments become part of our Constitution, notwithstanding the objections of the federal government.

This state convention process cannot be denied, vetoed, or regulated by Congress, the president, or the governors of the respective states. The Convention is totally controlled by the selected delegates. If state legislatures believe that a massive, overreaching, debt-ridden, dysfunctional federal government is not operating within the framework of our Constitution, it is their duty to act.

If the states fail to call a Convention, or the federal government thwarts the process, individual states have other options to control federal overreach.

If a Constitutional Convention fails, or the federal government obstructs it, individual states can protect the liberties of their citizens. All state actions to protect liberty must be peaceful and non-violent; otherwise, they give the federal government the excuse it needs to crush states and citizens as “enemies of the state,” and impose martial law.

States acting individually or as a group of states, have several peaceful ways to protect personal liberties from federal overreach. The greater the number of states participating in the freedom-seeking effort, the greater the chance of its success. If the 20–27 so-called “red” states acted together, they will have the leverage to seriously negotiate over the scope of federal power. The primary options:

Non-Cooperation: Martin Luther King used non-violence and non-cooperation to secure equal justice for all in the U.S.. Gandhi used these tactics to challenge the British Empire. States wanting a smaller federal government and to protect the constitutional rights of their citizens could, as a group, voluntarily take a non-cooperation stance on federal programs.

State Personal Liberty laws: From the founding of the Republic to the Civil War, abolitionists persuaded states to enact Personal Liberty Laws to protect fugitive slaves. These laws were grounded on the principle that states could protect individuals within their borders. To avoid the federal supremacy clause rendering inconsistent state laws void, the States enacted laws making it difficult for bounty hunters to capture fugitive slaves by denying them state resources, e.g., bounty hunters could not hold fugitive slaves in local jails, and the imposition of high court costs to secure the “legal transfer” of a fugitive slave substantially reduced the value of the bounty.

Today, to maneuver around the Supremacy Clause, states would enact laws expanding the civil rights of those living in a state.  A few current examples. Washington State. has enacted stronger protections against warrantless searches than the federal constitution. Eight blue states and hundreds of cities have enacted Sanctuary laws to protect immigrants from federal prosecution. One state is proposing to prohibit federal law enforcement officers from arresting or detaining individuals solely on the basis of a civil immigration detainer. On the “red” side of the ledger, there are three states and over 230 counties in 19 states that have enacted Sanctuary laws to protect the constitutional rights of gun owners.

The most widespread use of Personal Liberty Laws is found in the states that have legalized marijuana, a substance still considered illegal under federal criminal law. Recreational use is legal in 11 states. Thirty-five states have legalized it for medical use. Only five states follow federal law. These states prove states cannot be forced to implement federal law. If the federal government wants marijuana laws implemented in forty-six states, it will have to do it itself.

Today, the federal government’s threats to individual liberties center around restricting free speech, religious freedom, freedom of association, right to trial by jury, and to confront one’s accuser. State Personal Liberty Laws could be enacted to enlarge federal constitutional protections. It would be difficult for the federal government to attack state laws that expand the constitutional rights of citizens.

States might also prohibit the federal government from warrantless spying on American citizens in their states, filing false documents to mislead a court or prohibit federal constitutional and human rights abuses by imprisoning citizens, with only scant evidence, for long periods, without a trial and placing them in solitary confinement in what is now referred to as DC Gitmo. All of these actions are violations of federal law but the federal government ignores the crimes it commits so it can gain more domination over citizens. States can stop federal abuse of law.

As states restrict illegal federal practices, it would become more difficult for federal officials to carry out illegal activities in these Free States. New types of Personal Liberty Laws are needed to protect citizens in the 21st century, just as they protected fugitive slaves from bounty hunters.

Citizens in these Free States could boycott woke big businesses: Citizens in the Free States could boycott products and services made by U.S. businesses that demand or indoctrinate their employees into wokeness, manufacture products in China using slave labor, assist China to violate the privacy of U.S. citizens or deny “objectionable” individuals the right to use publicly available social media.

Through non-cooperation with over-reaching federal laws, by enacting state Personal Liberty Laws, and challenging abusive business practices fostered by the federal government, citizens of Free states have the opportunity to live in states that protect freedom. These challenges will place a spotlight on federal overreach as well as the ability of citizens to achieve freedom. The more states that promote freedom, the greater the possibility of freedom for all Americans.

The federal government will not on its own restrain its thirst for power. It will take state action to preserve the Republic.

How Cannabis Can Help With Common Health Issues

How to Prepare to Sue Your Hairdresser