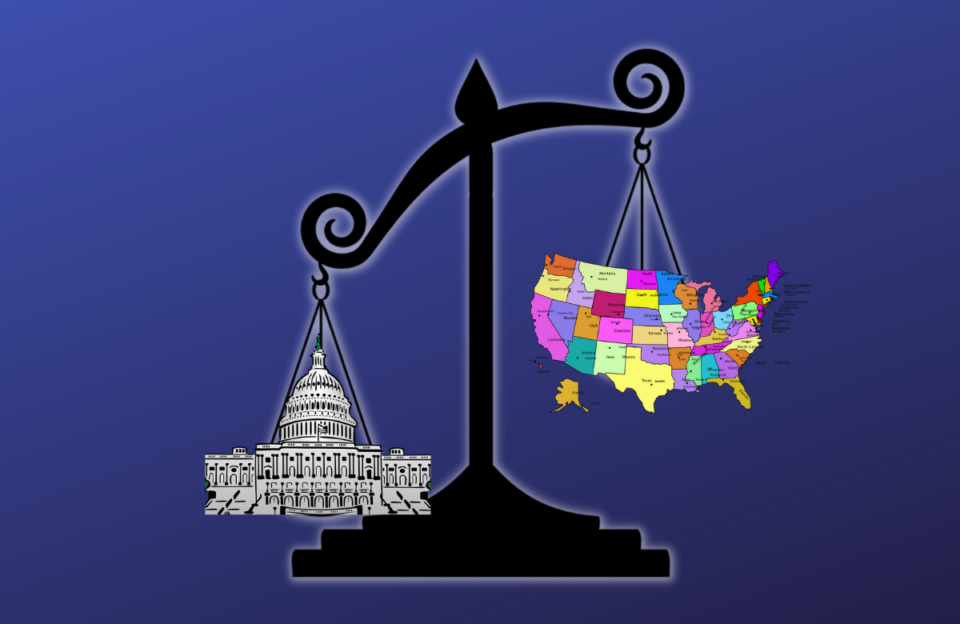 This Part IV of “Can the U.S. Unite? If Not, How Does it Divide?” discusses actions taken by states to resist federal diminishment of state sovereignty. For now, it’s a “civil” Civil War, but if the federal government continues to trample on state sovereignty, the conflict could lose its civility.

In just eight months Biden issued 52 Executive Orders, 92 Proclamations, and 26 Presidential Memoranda. The federal government is literally swallowing whatever is left of state sovereignty. Many of the so-called “red” states are now fighting back. As of August 4, 2021, there were 13 multi-state lawsuits against Biden administration policies for encroaching on state sovereignty. The disagreements are broad:

Texas sues the Biden administration over the release of illegal aliens within Texas and staging the transfer of these illegals using Texas transportation facilities and local communities for housing and health care.

Texas, joined by Arizona, sues the Biden administration for halting the already approved, partially funded construction of the border wall to protect the border states.

Missouri and eleven other states sue the Biden administration over Biden’s Executive Order that unilaterally asserts the power to dictate specific values for the social cost of greenhouse gases as a way to regulate climate change without congressional approval.

Louisiana and Wyoming and twelve other states sued the Biden administration for arbitrarily halting new oil and natural gas leases on federal lands.

Montana and twenty-three states sued the Biden administration to force reinstatement of the canceled Keystone Pipeline, which had already been permitted.

West Virginia and twelve other states sued the Biden administration over the provisions in the $1.9 trillion relief package limiting the ability of states to reduce taxes using federal pandemic money.

Twenty-Five Red States are opting out of the $ 300 a month extra unemployment weekly bonus as a disincentive to work.

At least three states have banned and twelve more are proposing to ban the teaching of Critical Race Theory (CRT) in public schools. CRT teaches students that race is central to their education. The Biden administration is implementing it through a Department of Education grant program.

South Dakota established a “Committee on Neutralization of Federal Laws” to review whether proposed federal laws or regulations are constitutional.

Even local governments are seeking ways to promote freedom from federal overreach. Sixty-seven Florida counties are proposing the adoption of a Bill of Rights Sanctuary Ordinance. Two counties in Nevada are proposing to become “Constitutional Counties” where the local sheriffs will protect the constitutional rights of citizens from federal overreach.

Domestic conflicts distract Biden from protecting the nation from harm

While Biden is waist deep in domestic fiascos, the world turns an evil eye to the United States.  Biden’s hasty withdrawal from Afghanistan leaves the U.S. open to horrific outcomes. Afghanistan is being ruled by powers hostile to us and maybe subsumed by civil war. Finally, China, Russia, Iran or North Korea, will likely test our feeble president in some far-off area of the world, e.g., the South China Sea, Ukraine, or Syria.

Under Biden, the U.S. is beginning a decades-long decline, similar to the decline of Great Britain. At some point it is likely the U.S. will settle into a state of equilibrium, just as happened to Great Britain. The U.S. will still be a major country, like Great Britain, France, or Germany, but it will lose the title of “world superpower.” The sun will set on the U.S. empire unless the federal government recognizes it cannot address every whim of the nation. It must prioritize what is most important – security of the nation and a sound economy.

Devolving federal power to the states is necessary.

If the federal government can admit it needs help to manage a massive nation, many states would seriously embrace as much self-governance as possible so their citizens can enjoy as much freedom as possible, including freedom of speech and religion, protection from crime, fewer federal regulations, limited government, and lower taxes. A few options are:

Congress can just “do it.” Congress, on its own, at any time, could transfer many of the domestic functions it amassed in the last century, back to the states. A few options are:

Negotiations with states. Congress could negotiate with the states over which of the 2200 federal assistance programs the states can best manage without federal involvement and then transfer those programs to the states.

Re-constitute the Joint Committee on Reduction of Non-Essential Federal Expenditures operated between1941 to 1974. Its sole purpose was to recommend to Congress ways to reduce the massive federal government created by WWII.   If Congress wants a rational decision-making process for determining what programs to devolve to the states, it could re-establish this Committee.

Enact a Base Realignment and Closure Commission (“BRAC”) that applies to general appropriations. Using the BRAC structure, Congress could apply the same approach to all recommended reductions as a means of reducing political support for unneeded programs. The Commission would recommend and Congress would approve or disapprove.

Congress could simply not fund unauthorized laws. Thousands of laws expire and are never reviewed or separately reauthorized. Instead, Congress merely deems all these laws to be reauthorized. In the FY 2019 appropriations, Congress funded 971 expired laws at a cost of $307 billion. If  Congress has so little interest in certain laws that it will not even review the viability of the law, why should it fund them?

Congress mandates agencies identify and eliminate unnecessary expenditures. Every agency should be required to eliminate unneeded programs. Each agency would recommend a fixed percentage reduction in expenditures. All recommendations must be addressed by the agency.  This program reduction effort will eliminate hundreds of billions of dollars in appropriations, create government efficiency, and eliminate regulatory duplication.

If the federal government refuses to devolve power to the states, states could form Compacts to develop, implement or eliminate programs in lieu of federal programs

Enter into Formal Compacts with other States under Article I, sec.10, cl 3, with the Consent of Congress. While these compacts are generally used to manage multi-state matters such as rivers between two or more states, or interstate air pollution, they could be used to establish uniform, multi-state programs, desired by the states, and implement them in lieu of federal programs, e.g., criminal justice, welfare, health care, job training, labor reform.

Enter into Informal Compacts with other states. If Congress declines to approve the formal Compacts, states could informally organize to address issues of concern. For example, nine states in the Northeast and Mid-Atlantic, and three west coast states, formed regional compacts to address climate change concerns. These states enacted programs that were substantially different from federal statutory programs. States could form a Compact of Free States to protect free speech, religion, right of association, and free enterprise. Moreover, they could informally establish joint litigation teams to wage a well-financed, legal war against federal overreach. Without congressional approval, the states would merely work together on a voluntary, informal basis.

If the federal government devolves powers to the states, it will have more time and resources to focus on the primary federal issues of security and the economy.

If the federal government rejects devolving power and participating in federalism, it sends a strong message to the states that its goal is amassing power, not governing for the benefit of citizens. This rejection also tells freedom-loving states and their citizens, the U.S. will only become more authoritarian. At that point the states must explore mechanisms to confront absolute federal power; that is Part V.

Links to Parts I, II, III