2. The influence of Koch Industries money 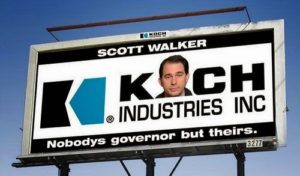 During the controversial 2012 recall election, a large sum of donations made to the Walker campaign came from the political power backers Charles and David Koch, of Koch Industries.  Reports would later expose that Scott Walker received $8 million in campaign donations from the Kochs alone. According to non-partisan site PolitiFact:

A Buffalo, N.Y., blogger posing as David Koch made a prank call to Walker. Walker discussed ways Koch could help Republican legislators, presumably with TV and radio ads. He also said he considered — but rejected — planting troublemakers amid demonstrators who had been protesting his policies at the Wisconsin Capitol for a week.

This secretive collaboration between Walker and the Koch brothers has since haunted Walker’s reputation, creating the question as to whether or not money is controlling Walker’s decisions in office.