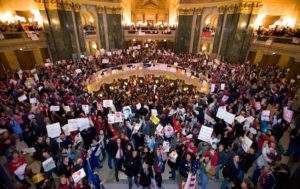 At the beginning of his time as governor in 2011, Walker announced “…his budget-repair bill, which would increase the costs of benefits to public employees and curb their collective bargaining rights, to combat a $137 million shortfall through the end of June, and a $3.6 billion gap by 2013″ (CNN Library).

Thousands of workers, feeling their collective bargaining rights were being unfairly attacked, were organized by various unions to go and protest in the capital of Wisconsin, occupying the capital building for several weeks. After the protests began to dissipate, the bill was later passed in the Republican controlled state senate in late March of that year.