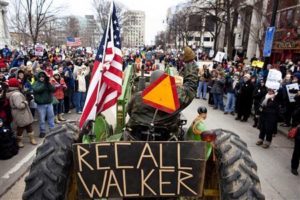 With the Budget Repair Bill in action, the Democratic Party and various major workers unions worked together to remove Walker as governor, first by obtaining more than 1 million signatures in order to petition for a recall of his position. During this turbulent period that resulted when the petition was accepted and the recall was enacted, Walker defeated his Democratic opponent, former Milwaukee Mayor Tom Barrett, by a 53-46 margin. This was the first time in US history that a governor has survived a recall election.