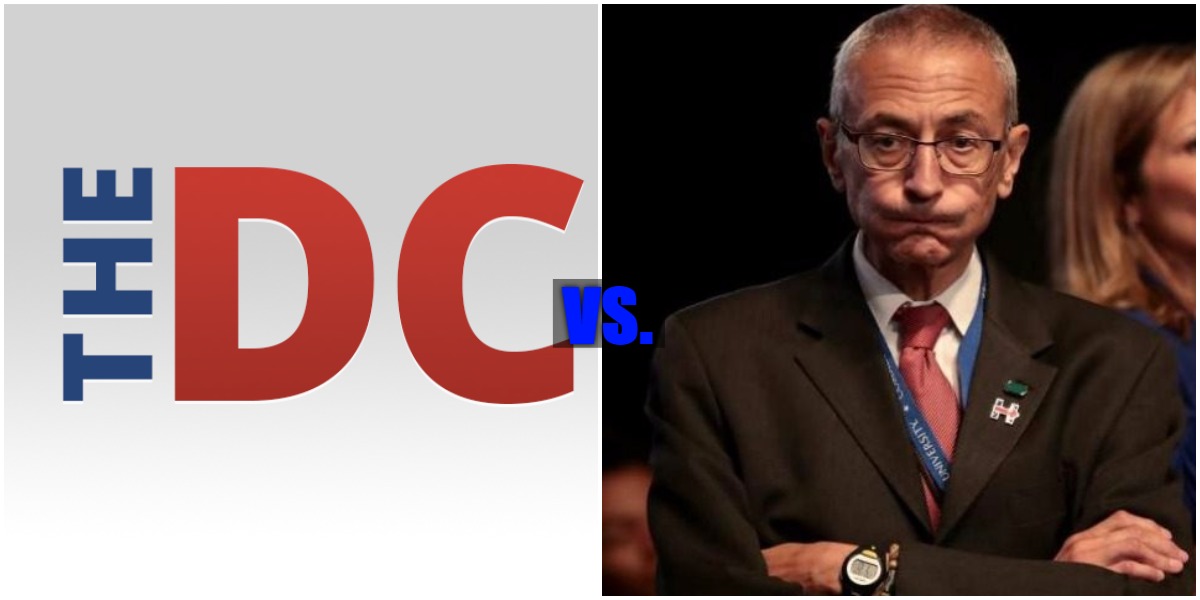 Yesterday, The Libertarian Republic (TLR) reported that former Hillary Clinton operative John Podesta and his legal team had request that The Daily Caller “cease and desist” a story titled “EXCLUSIVE: John Podesta May Have Violated Federal Law By Not Disclosing 75,000 Stock Shares,” over allegedly libelous statements in the piece. (RELATED: John Podesta to Daily Caller: Cease and Desist)

On Friday, The Daily Caller (also known as the Daily Caller News Foundation), through its publisher Neil Patel, responded to the letter and the claims of libel calling them “legally empty.”

Patel, in his response to Podesta, pushed back on claims that TheDCNF did not try to reach Podesta for comment, explaining that confusion or misunderstanding could have been cleared up if Podesta would have responded to any of three pre-publication attempts.

“Mr. Podesta could have avoided any misunderstanding of the facts by responding to any of TheDCNF’s three pre-publication requests for an interview or comments,” Patel wrote.

Patel then moves to his second point, saying that the letter to the publication ” does not respond to the substance of the Article,” and that the assertion made by Marc Ellis, Podesta’s lawyer, that the Article is “entirely false” is “not borne out by the facts.”

TheDCNF publisher did admit to one ” err in one minor respect,” explaining that “Mr. Podesta was not required to file Schedule B to OGE Form 278, since he was a “new entrant” at the time he certified the Form. TheDCNF has posted a revised version of the Article to revise references to Schedule B, and an Editor’s Note to advise readers of the change.”

Patel concluded his rebuttal by explaining that he believes a libel lawsuit would fail because the case does not pass the standard for such a case. He stated, “public figure libel complaints are dismissed at the outset of a case because they cannot state facts that could prove actual malice.  This standard protects the First Amendment rights of the press to publish, and of the public to be informed.”

Re: Claim of John Podesta

This letter is in response to your letter of March 29, 2017, written on behalf of your client, John Podesta. The subject of your letter is an article that was posted to dailycaller.com on March 26, 2017, entitled “John Podesta May Have Violated Federal Law By Not Disclosing 75,000 Stock Shares.” (the “Article”).

This letter will explain how Mr. Podesta’s threat of a libel suit is legally empty. It will explain how Mr. Podesta could have avoided any misunderstanding of the facts by responding to any of TheDCNF’s three pre-publication requests for an interview or comments, how his attack on TheDCNF’s journalism is groundless, that none of the facts reported in the Article (with the sole minor exception of the Schedule B issue, which has been corrected and is addressed below) were incorrect, and why TheDCNF’s interest in the matter of Mr. Podesta apparently sitting on the board of a company with Russian state-owned entities and expression of opinions and questions arising from that fact are protected by the First Amendment. As a responsible publisher, TheDCNF is willing to further correct the Article if Mr. Podesta provides documents that warrant a correction.

First, you are entirely wrong in asserting that TheDCNF did not seek comment or information from Mr. Podesta before publishing the Article. It is TheDCNF’s practice to seek comment from the subject of articles before publishing, and it followed that practice here. The reporter on the Article, Richard Pollock, sent three e-mail requests seeking to contact Mr. Podesta for an interview, all well before the Article was published:

I am writing an article on Mr. Podesta’s role at Joule Unlimited.

Could you kindly put me in touch with Mr. Podesta or one of his aides?

If possible, I would like to interview Mr. Podesta today, so the timeline is quite brief.

All the best,
Richard

I am a reporter with the Daily Caller News Foundation.  Tanya referred me to your email.

I am interested in arranging a brief interview today with Mr. Podesta about his role and activities as a board member of Joule Unlimited and the company’s other branches.

My deadline is today as I’m filing this evening.

Could you kindly put me in touch with Mr. Podesta or one of his press aides?

I am writing a second story about Mr. Podesta’s role and income associated with his board membership at Joule Unlimited.

I need to get in touch with his office to invite him to respond to our questions.

Can you send me a contact for Mr. Podesta?  I am writing this second story today and would appreciate being able to talk to his office directly.

All the best,
Richard

Mr. Podesta chose not to respond to any of these pre-publication efforts to reach him for an interview and comments. Before you wrote your letter, you should have been aware of Mr. Podesta’s non-response from the statement in the Article that “TheDCNF inquiries to Mr. Podesta were not returned.” If any apology should be made here, it should come from you and Mr. Podesta for an unwarranted attack on Richard Pollock’s responsible journalistic practices.

Second, your letter does not respond to the substance of the Article, which concerns the whereabouts of 75,000 shares of stock in Joule that Mr. Podesta was entitled to receive. The fact that Mr. Podesta, a senior national political figure, apparently sat on the board of Joule with Russian state-owned entities only elevates the importance of this matter. Your assertion that the Article is “entirely false” is not borne out by the facts. The Article states on the basis of publicly-available information, and you do not deny, that:

You point out that at the end of the Schedule A of Mr. Podesta’s disclosure form, that the Joule stock was “divested.”  This document (and the statement of a Clinton campaign spokesman that Mr. Podesta had “personally divest[ed] himself” from Joule), was made available to readers of the Article, so this statement is another disclosed fact.  The fact that your letter does not account for the remainder of the 75,000 Joule shares not documented as transferred to Leonidio leaves open questions as to the correctness of Mr. Podesta’s “divested” assertions.

Having reported the underlying facts (and having provided a link through which readers could see Mr. Podesta’s disclosure form), TheDCNF was entitled to express the opinion, protected by the First Amendment, that based on these facts, Mr. Podesta’s non-disclosure of a possible continuing personal interest in the Joule stock “may have violated federal law,” and to report the equally protected opinions of legal and disclosure experts on the subject matter.  Nothing in the Article constitutes actionable defamation.

Nonetheless, TheDCNF invites Mr. Podesta to provide documentation that would show that at as of February 21, 2014, the time of the filing of the disclosure statement, he had fully divested himself of the Joule stock and neither he, nor his spouse, nor his children, had any financial interest in that stock.  Depending on the documentation submitted, TheDCNF may either make no change to the Article, correct it, or even withdraw it.

Third, TheDCNF has reviewed the Article in light of your letter, and agrees that the Article erred in one minor respect: Mr. Podesta was not required to file Schedule B to OGE Form 278, since he was a “new entrant” at the time he certified the Form. TheDCNF has posted a revised version of the Article to revise references to Schedule B, and an Editor’s Note to advise readers of the change.

Fourth, as our attorneys at DLA have made clear to you  with only one minor error in a complicated matter handled with great care, Mr. Podesta would fail to meet the libel standard for a public figure it were he to sue TheDCNF.  Public figure libel complaints are dismissed at the outset of a case because they cannot state facts that could prove actual malice.  This standard protects the First Amendment rights of the press to publish, and of the public to be informed.

We believed (and, given the limited information in your letter, still believe, with the exception of the corrected matter mentioned above) that the facts disclosed in our story were correct.  Moreover,  our story was journalistically fair and balanced:  we quoted a spokesman from the Clinton campaign that defended Mr. Podesta’s actions; did our best to reach Mr. Podesta for an interview before we published; and made Mr. Podesta’s actual disclosure form available to our readers, so they could draw their own conclusions from the document.  This strongly cuts against any claim that TheDCNF acted with actual malice. As a result of your letter, TheDCNF has determined that it made one error in the Article, which is addressed above and has already been corrected. Responsible publishers make errors with some frequency, and are willing to correct them when they become aware of them. What is clear is that Mr. Podesta cannot meet his heavy burden of proof in a libel case. There is nothing in your letter that would plausibly evidence actual malice on the part of TheDCNF in publishing the Article.

I invite you to contact me if you wish to further discuss this matter.

TLR will update this article as it continues to develop.

Dems Get Dirty In Campaign for New Jersey Governor

Watch A Video Mashup Of Women Defending Themselves With Guns

FACT CHECK: Did Tomi Lahren Accuse Migrants Of Bringing Disease To The US With ‘Zero Evidence’?