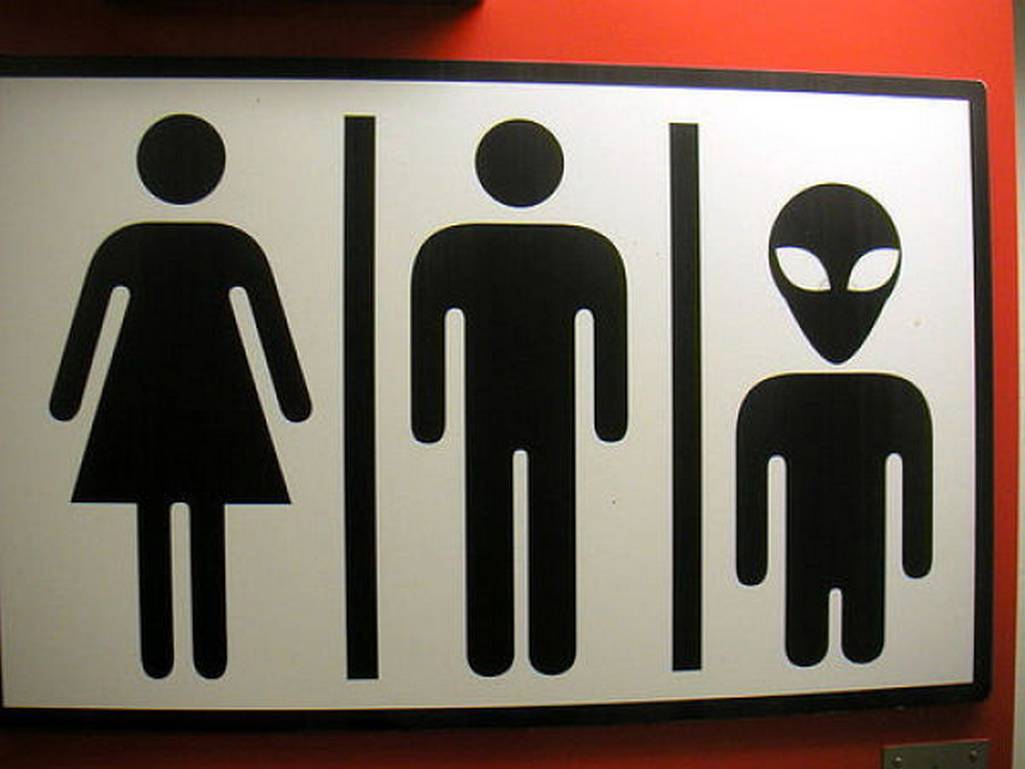 Jacob Tobia wrote an article for Time Magazine advocating for gender neutral bathrooms. The logic being of everything in our society, gendered bathrooms are one of the last institutions that serve to segregate people along gender lines. It’s a great read. Also, for those who don’t consider themselves male or female – there is no ‘proper’ bathroom choice.

Tobia doesn’t consider themselves male or female. They wear eyeliner, makeup, and feminine clothing – but also sport a scruffy beard and dress sort of like Jonathan Taylor Thomas. Tobia is happily in between the male and female polarities.

I don’t think it’s a stretch of the imagination to assume Tobia has run into some major jerks in bathrooms in their time. In the 9490 or so days Tobia has been on this planet earth, they have used the bathroom thousand and thousands of times. It’s probably happened to them – and more than once.

With that said, I do get that people are freaked out about the rapidly evolving definition of man, woman, and those in between. That talk of transgender bathrooms, custom pronouns, and conversations associated with these issues often come with a bullhorn and not from a place of understanding – from either side.

One side will tell you that ‘sexually confused’ people shouldn’t be sharing bathrooms with little girls – and that hypothetically anyone with a wig could storm into a woman’s bathroom and cause all sorts of terrible atrocity. They are skeptical of any biological man trying to enter a very private space. Which if you consider the history of biological men, is a legitimate reason for a bit of pause.

It seems this issue is focused on the issue of transwomen, as well. It seems transmen have received less coverage regarding this issue.

The other side will say those concerns make you a bigot and a jerk and you should either get with the program or go die in a fire. Any concerns are unfounded – adapt or die, as they say. On top of that, even IF some transgendered people turn out to assault someone in a bathroom – it’s such a small fraction of people that you can’t throw the baby out with the bathwater.

Basically the same arguments conservatives use for gun rights.

I’m somewhere in the middle. I don’t care where anyone wants to pee – as long as it’s not in my face. But I get why folks find themselves a little concerned about the notion of a biological male in the women’s bathroom because biological men are routinely pigs and staring at a shocking new reality that gives traditionalists pause.

So perhaps eliminating gendered bathrooms all together is the answer. “I went to a restaurant that had no gendered bathrooms whatsoever. Instead, there was an open, communal area with seven or eight sinks, flanked on either side by a dozen individually locking bathroom stalls with floor-to-ceiling doors. It was totally comfortable, completely gender-neutral and, most importantly, provided plenty of privacy in which to do your business.” Said Tobia in the Time article.

Talk about potty utopia. If businesses have the space and resources for something like that – go for it. Unfortunately, many bathrooms are small, cramped, isolated, and the resources would not be available for many businesses to construct such a wonder.

I also have to imagine the idea of co-ed bathrooms in elementary and high schools would go over like a fart in church, too.

Additionally, a bathroom like this in a casual restaurant is one thing. Picture a nightclub, singles bar, NASCAR racetrack or in a rural town that isn’t quite as progressive as New York or Los Angeles. I foresee a situation where a male notices the kind of underwear that’s down around the ankles of a woman and makes a stupid comment about how sexy they are, how not sexy they are, or even about how much of a bitch she is for making loud pooping noises.

Luckily, this is hypothetical. Surely a few bad dudes harassing women in the bathroom isn’t enough to change the whole system, right?

Would most women feel comfortable sharing their bathroom with men? I don’t know. I DO know women often take solace in their bathroom if they are being harassed by a man at a public location. I also know I personally would feel uncomfortable pooping in a bathroom full of women.

I’m a gentleman like that…I guess, but I could get over it.

This issue is so tough because we’re dealing with gender roles, ideologies, prejudices, institutions, infrastructure, hypothetical worries, men, women, girls, boys, those in between, and literally shit, too.

And it is here being a libertarian provides an opportunity so ripe I want to bite into it on a warm summer day. By definition, a libertarian will defend a person’s right to privacy, liberty, and in this case, the liberty to use whatever bathroom you want. A libertarian perspective could careless if you’re male, female, trans, questioning, or the cookie monster. A libertarian, would, I imagine, advocate for gender neutral bathrooms because gender specific ones could be considered a useless regulation – and a limitation on personal liberty.

Realistically, a libertarian could be entirely put off by the very notion of transgenderism, but defend their right to use whatever bathroom they want. Just like how the ACLU defended the rights of the KKK in Skokie Illinois.

Also, Tobia isn’t saying this is what we SHOULD do. They are advocating for a serious national conversation about it and pose it as a viable option. It provides an avenue for an actual conversation with tough questions and an open exchange of ideas.

Speaking selfishly, the more LGBTQ people we have on the libertarian side, the more money, influence, and elections we’ll win. Keep in mind Barack Obama and Hillary Clinton didn’t come around on gay marriage until a little under a decade ago. Libertarians don’t care about gay marriage, they care that everyone has the same rights under the law.

Libertarians also care about the rights of private business owners – let them handle the bathrooms however they want and let the free market sort it out. That could be problematic if you’re the kind of person who advocates for federal regulations on these things in lieu of wallets and public opinion doing the talking.

But at least we’re talking. I think. On twitter I reached out to Tobia about what pronouns they’d prefer (They/Them) and got some pretty gross comments from self-proclaimed libertarians.

Ultimately, I ask of libertarians to have an open mind and warm heart. LGBTQ peoples and libertarians want all of the same things.

Of the LGBTQ community I ask the following questions:

WWE Legend Kane to Run for Mayor in Tennessee