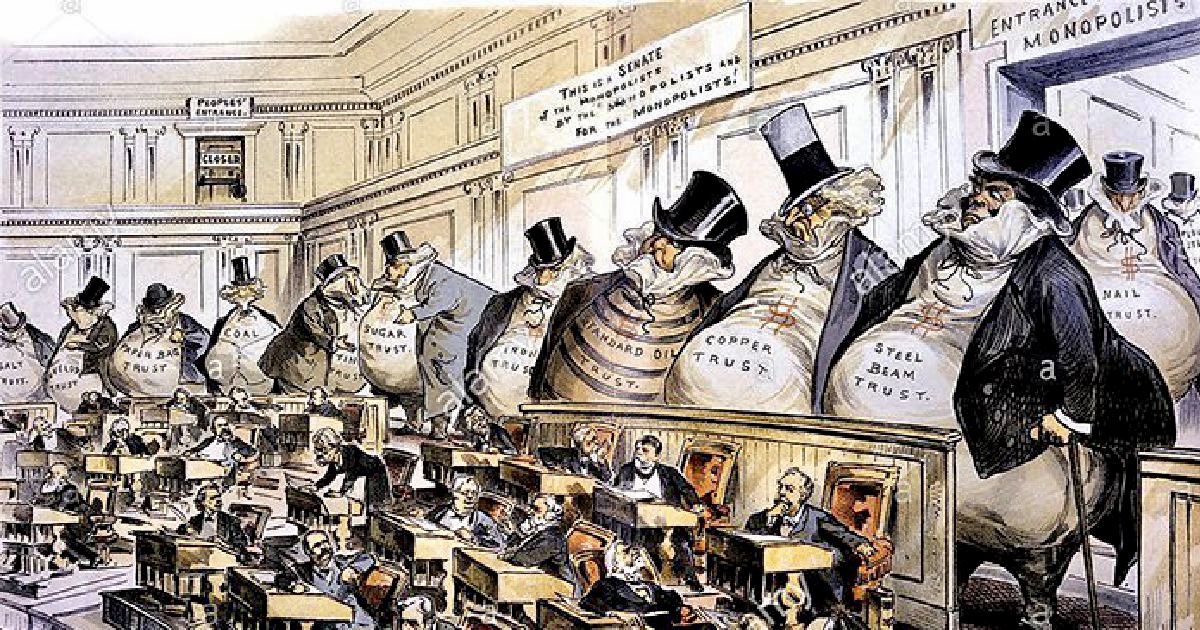 This series of articles explores options to break the monopoly control of our government by the two major political parties.

The first article describes the monopoly. The second discusses tactics used to maintain the monopoly. The third article suggests using a civil rights law to secure reasonably permanent ballot access and compensation for injury. This article explores using antitrust laws to open up the U.S. political system to competition.

There are no reported attempts to apply U.S. antitrust laws to a denial of ballot access. Historically, antitrust laws addressed restraints on commerce, not politics. Additionally, states and political parties will claim immunity from antitrust liability. While the legal obstacles seem insurmountable, when separated, each are scalable.

The Sherman Antitrust Act (“Sherman Act”) applies to agreements or conspiracies in restraint of trade or commerce; i.e. conduct that monopolizes a relevant market in commerce. Violators are subject to treble damages. Since the two major parties’ control 99.96% of elected offices, they have monopoly control of the political market. The question is whether these activities restrain commerce?

The term “commerce” in the Sherman Act is redundantly defined to mean trade or commerce among the several states. Understandable definitions are found in dictionaries; e.g.  the “exchange of goods and services along with activities…to complement the exchange,” or “the whole system of an economy that constitutes an environment for business” including legal, economic, political, social, cultural and technology.

Antitrust law has been applied to large and small businesses, trade associations, professional organizations and even farmers, and labor unions (now statutorily exempt). So why not apply the antitrust laws to political parties, which are corporations that nominate, support and fund the persons who actually control the commerce of the nation?

Politics is big business. In the 2012 election, over $6.2 billion was spent on the election; and $6.6 billion on lobbying. Spending resulted in big financial returns; 0.26% of the population gave 68% of the money. The big donors wanting policy changes were twice as likely to get the change wanted as the average person. A 2014 report by Andrew Prokop, notes that “Some studies have found companies can get as much as a 22,000 percent return on their lobbying dollars”.

The two major political parties organize to control our government so they can control the nation, including its commerce, e.g. trade, advertising, finance, communications, food production. By limiting third-party access to the ballot, the two parties maintain perpetual control over commerce.

The two major parties limit competition specifically to protect themselves (incumbents). David Dodson wrote about his experience challenging an incumbent Senator. He notes Democrat and Republican campaign committees blacklist companies that do business with challengers. The same blacklisting is likely to apply to businesses working for third-parties.

Since business, i.e. commerce, always wants government help, it supports those holding power in government. By excluding third-parties from the ballot, and denying top consultants to challengers, the two major parties help big donors protect their investment, and share of commerce.

Simply put, political parties provide services for money, and these services are the lifeblood of commerce.

The Major Political Parties Are Not Immune from Antitrust Liability

The two major parties will assert they are immune from antitrust liability under the Noerr-Pennington immunity doctrine (“NP immunity”) which protects competing entities from antitrust liability when they seek to influence government action, even for an anti-competitive purpose. Their argument is simple – they lobbied for ballot restrictions on third-parties to avoid voter confusion or to prevent voter fraud.

NP immunity is not blanket immunity. It is “content and nature specific” requiring an evaluation of the private parties’ conduct and the nature of the governmental process. Determining the application of immunity is a balance between the First Amendment rights of those lobbying government for an anti-competitive outcome, and economic freedom sought by the antitrust laws.

Ballot access disputes many times involve efforts by states and political parties to impose overly-restrictive conditions on third-parties or involve aggressive challenges to signature petitions with the sole purpose of preventing a party with adequate signatures from being on the ballot (Ralph Nader examples in Pennsylvania and Oregon).

In cases where the political parties seek unreasonable restrictions on third-parties, the proceedings are more likely sham proceedings. Government cannot grant private parties the right to deprive another of constitutional rights. The application of the antitrust laws in ballot access situations is fact-dependent. A political party is more likely to have immunity if petitioning for reasonable ballot access whereas, if the anti-competitive action sought is unreasonable, it is subject to antitrust action.

In ballot access matters, states argue that ballot restrictions are needed to protect the voting process. This is a facade of righteousness in which the state claims virtue by protecting the voting system, while denying the constitutional rights of the third-parties. This situation requires analysis of the facts. If the conduct is found unreasonable, it should be subject to the antitrust laws.

Action: To apply the antitrust laws to the noncompetitive conduct of the two major parties, third-parties must develop a strong rationale for political activity affecting “commerce”. The facts abound, it is a matter of organizing them. If the two major political parties do not impact commerce, then no one does. Once over this threshold issue, the immunity will disappear if the conduct is unreasonable. The potential of antitrust liability, by itself, should temper the unreasonable anti-competitive conduct of the two major parties.