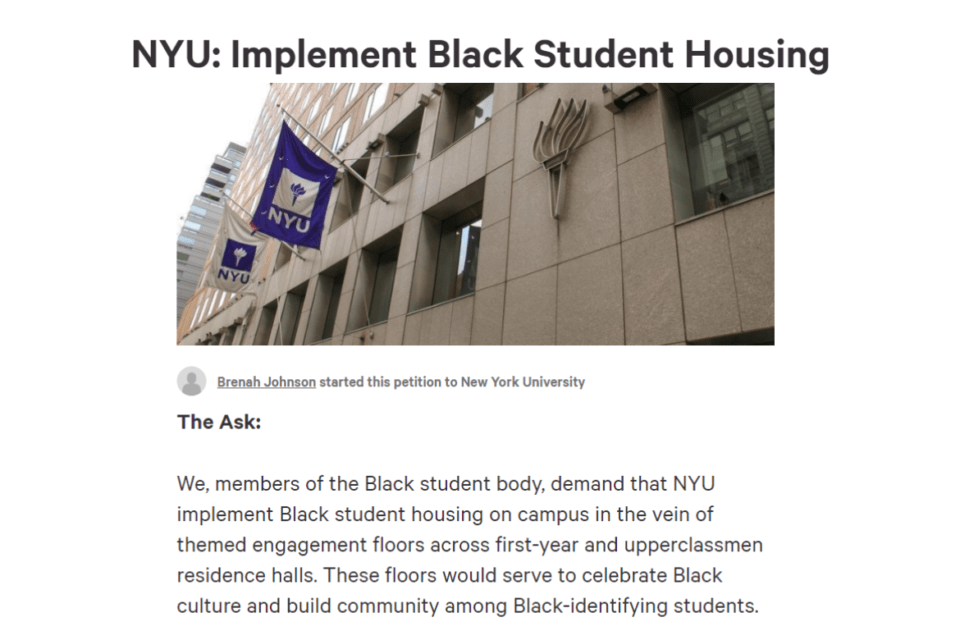 It shouldn’t be any surprise that this turn of events was on the horizon. After all, social justice warriors have been viewing social issues in America through the lense of race since before ‘SJW’ became a trendy acronym. Identity politics, especially when focused on racial identity with an intersectional hierarchy reaffirming a perception that white men retain the highest privilege, has thus far proven to move people toward voluntary segregation in social life.

The NYU students are simply trying to reform the public university in the same image as that social structure. That’s just the kind of thinking a racist would gravitate to—more so when the already established philosophical structure would place them at the top of a social ladder, peering down on the other self-arranged classes which inadvertently view themselves as less-than through their own philosophical assertions. They would no longer need to force their views onto others when the views of others already mirror their own. It takes all the work out of beating people down when the people do it themselves, leaving a racist to just enjoy the fruits of others’ labor. History has shown that is what they want to do in the first place.

Spencer’s move isn’t something that just came to him out of the blue. Since I first heard his name, I’ve seen how closely his own politics align with a leftist agenda. He has championed abortion from the beginning because, as he puts it, “the people who are having abortions are generally very often black or Hispanic or from very poor circumstances.” Leftists use a nearly identical justification for their support in maintaining the legality of and expanding access to abortion.

Spencer doesn’t call himself a white nationalist either. Instead he uses a cryptic term, ‘identitarian’, to explain his views. Identity politics on the Left, Identitarianism on the “alt-right.” Both leading to segregation of races and classes in one form or another. Sounds a little too coincidental. He also started showing his support for Universal Basic Income and National Healthcare, products of the Democrat agenda, while he was still heralding himself as a Trump supporter; even attempting to appeal to the President to give them serious consideration. 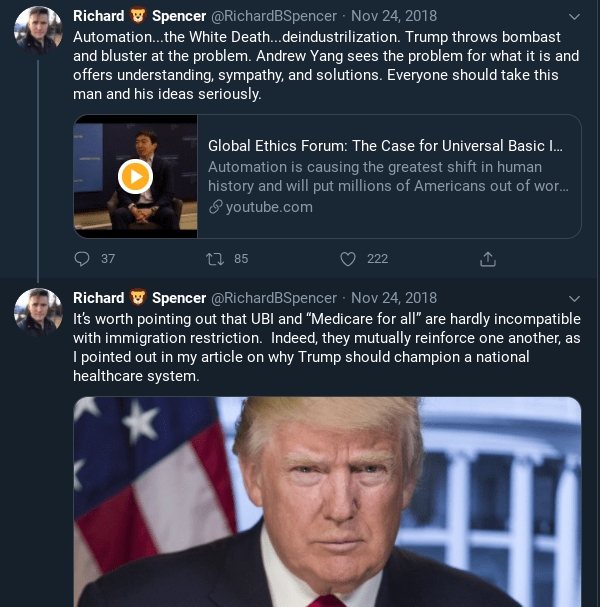 For the time being, it almost seems as though woke leftism and identitarian racism were fated to be together, given their myriad commonalities. Will it end in the destruction of either philosophy, or the marriage of the two into one fluid philosophy? Perhaps time will tell.

The Left’s continuing trend to infuse racism into their political ideology is arguably why alt-righters would feel a familiar vibe congruent to their own. Spencer has already shown this vibe is attractive enough to try to join the leftist ranks once again, encouraging others to follow.

Why is SEO important?

How far can radio signals be broadcast?