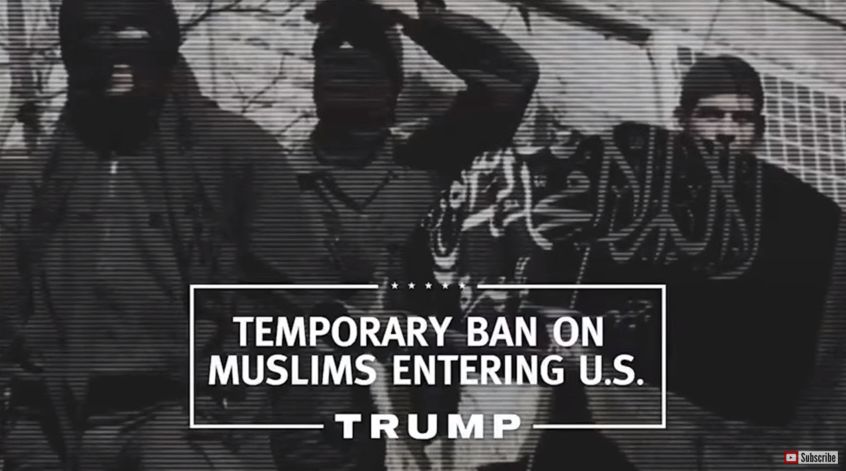 Republican presidential front-runner Donald Trump released his first TV ad Monday, and the 30-second commercial touts two issues the candidate has taken the most heat for: a temporary ban on Muslim immigrants and Mexico pay for a border wall.

“The politicians can pretend it’s something else, but Donald Trump calls it ‘radical Islamic terrorism,’” a narrator’s voice says to begin the ad. “That’s why he’s calling for a temporary shutdown of Muslims entering the United States until we can figure out what’s going on.”

The ad, which was first reported by The Washington Post, shows pictures of the San Bernardino shooters, Islamic State members, and illegal immigrants as the narrator vows Trump will stop them.

“He’ll quickly cut the head off ISIS and take their oil, and he’ll stop illegal immigration by building a wall on our southern border that Mexico will pay for.”

Trump announced he would spend at least $2 million a week on TV advertising split between Iowa and New Hampshire.

The ad ends with a video clip of Trump saying his famous slogan at a campaign rally, “We will make America great again.”

So far, Trump has only done radio ads. Trump’s campaign said a new radio ad will run this week featuring the first female Marine to serve in combat operations, Kathryn Gates-Skipper, who has endorsed Trump. The campaign also touted an upcoming radio ad with Nancy Mace, the first female graduate of The Citadel, The Military College of South Carolina.

“We have a lot of the rallies in them and we’ll include more, assuming it looks good and is captured right,” Trump told The Washington Post regarding his future TV ads. “I don’t like sitting down and shooting an ad because I don’t think you capture the same energy you see at our events like we had in Mississippi on Saturday.”

Trump was referencing a large crowd at his Saturday Mississippi event which was held at an arena that sits 15,000 people.

“You can say the same words, ‘Make America Great Again,’ and various themes around it, but it’s doesn’t sound the same as it is when I’m up there on stage in front of 15,000 people going wild,” Trump told The Washington Post.

The ad will air Tuesday in Iowa and New Hampshire.

“We have tremendous crowds, incredible support from all over the country and I am $35 million dollars under budget,” Trump said in a statement on hiscampaign website announcing the ad. “We have spent the least amount of money and have the best results and this is the kind of thinking the country needs. I am very proud of this ad, I don’t know if I need it, but I don’t want to take any chances because if I win we are going to Make America Great Again.”

Man Brings His Cat to an NFL Game, Raises Questions