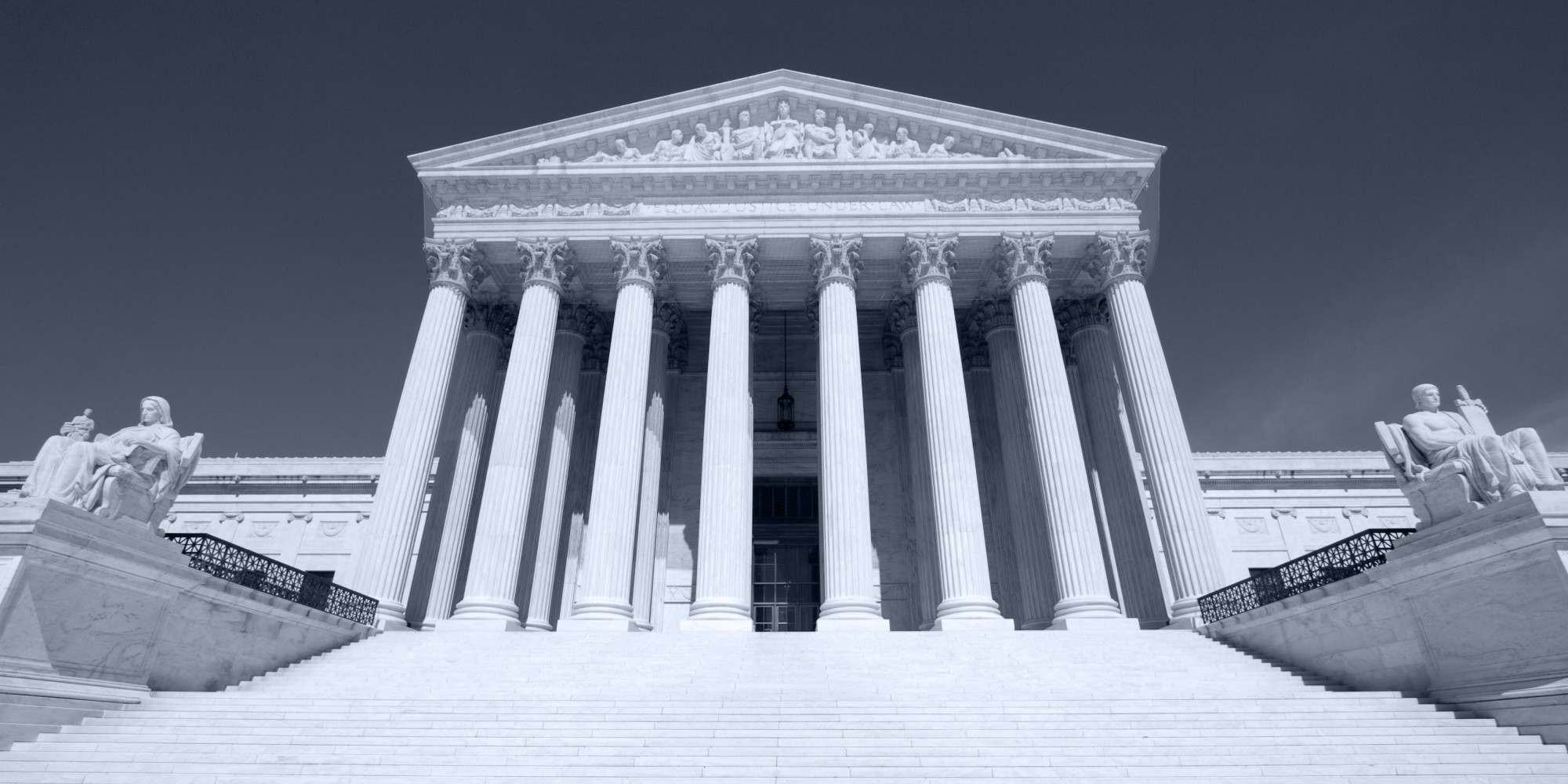 With election day quickly approaching, more and more conservatives appear to be caving-in and are readying themselves to vote for Donald Trump. As a young man living in the Deep South, the pressure from community elders to end my principled stand against a large-government statist in disguise only gets more intense each day. Unsurprisingly, the argument most frequently hurled in my direction centers around the United States Supreme Court and the justices the next president would likely appoint. Instead of making the election about a single man and his policies, conservatives have restructured their argument to focus on the broader future of American judicial politics.

The move is a wise one, and any defection from Donald Trump and his personal activities likely benefits the GOP. However, like most arguments made by political spinsters, the issue of appointments to the Supreme Court has been overly simplified and viewed with the hindrance of tunnel-vision.

Trump supporters’ argument in favor of their candidate relies on two underlying assumptions. First, it assumes that judges picked by Republicans can be trusted to yield conservative or libertarian outcomes. Secondly, it assumes that Trump would pick someone with conservative jurisprudential bona fides to begin with. But these premises stand on faulty evidence and lack significant support from the historical record of both candidate and country.

Over the years, conservative Supreme Court justices have yielded positive decisions for conservatives, but they have also shown the willingness to succumb to outside political pressure, and switch to a more expansive judicial philosophy. The most prominent such example is the shift of the conservative four horsemen during the 1930s, who had made a career out of striking down President Franklin D. Roosevelt’s New Deal economic programs like the National Recovery Administration and the Agricultural Adjustment Agency. When FDR threatened to pack the court with more liberal justices, Justice Owen J. Roberts made “the switch in time that saved nine,” and voted to uphold the constitutionality of a federally imposed minimum wage in West Coast Hotel Co. v. Parrish. After that, Roosevelt got just about every decision from the court he wanted.

But that was 80 years ago, and conservatives want to focus on the present of the court, not its past. Fair enough. The court currently has eight justices: three solid liberals, 3 conservatives, and a moderate. However, it is interesting to note that for conservatives, their worst modern constitutional nightmares have become a reality thanks to judges appointed by Republican presidents.

The Affordable Care Act, colloquially known as Obamacare, was saved not once, but twice by a George W. Bush-appointed Justice: John G. Roberts. In NFIB v. Sebelius, Roberts saved the ACA by holding the individual mandate was a tax, and therefore permissible under the constitution’s tax and spend clause. Three years later, Roberts wrote the majority opinion in King v. Burwell, which saved the law from its internal inconsistencies by holding that the wording “…established by the State” was superfluous when read within the broader structure of the act’s insurance subsidies.

Same-sex marriage, and topic Southern Conservatives still like to contest, became legal nationwide thanks to a Ronald Reagan appointee. Yes, you read that correctly. President Reagan put Justice Anthony Kennedy on the court in 1988, and almost 30 years later,  he wrote the majority opinion in Obergefell v. Hodges, which legalized same-sex marriage nationwide.

Roe v. Wade, decided in 1973 by a vote of 7-2, was handed down by a court with six Republican appointed justices. Six. The author of the opinion, Harry Blackmun, was nominated by Republican President Richard Nixon, who famously won the White House via the implementation of his southern strategy which took the so-called “Solid South” away from the Democrats and safely placed it in the hands of the GOP. In his two campaigns, Nixon only lost a Southern state five times (courtesy of native son George Wallace), and won all of them in his reelection bid in 1972.

So, when a Republican nominates a judge to the highest court in the land it does not guarantee conservative outcomes. Not by a long shot.

Even more fundamental to the otherwise-hesitant Trump supporters’ logic is that they have been convinced Trump will appoint Justices that are conservative — or at the very least, more conservative than Hillary Clinton’s.

First, the term “conservative” is very difficult to pin down, and with Trump hijacking the mantle, it becomes increasingly more difficult to do so. However, I have little doubt most conservatives would take issue with using Ronald Reagan as a standard of comparison. More effectively than any other politician, Ronald Reagan was able to effectively convey that the government should be limited and officials should contain their activity to what is listed in the constitution.

No other part of the Constitution more regularly protects the rights of Americans than the Bill of Rights. But when in comes to the Ten Amendments that secure the sacred liberties of the citizens, of the United States, few have shown more tendencies to abuse them than Donald Trump.

Some of Trump’s most frightening and authoritarian language has involved his fundamental opposition towards freedom of speech and of the press. Trump has repeatedly emphasized his desire to “open up the libel laws” to punish individuals and outlets that publish things he does not like. This tendency paired with Trump’s paper-thin skin could form a toxic combination.

According to Cornell University Law School, a public figure such as Trump must prove that a news outlet published false and damaging information and that it did so with “actual malice,” meaning “that a statement was made with knowledge that it was false or with reckless disregard of whether or not it was false,” in order to win a lawsuit.  But Trump wants to shift the burden from the individual criticized to the publisher, as is currently the standard in the United Kingdom. Such a standard could put lowly writers like me in a world of hurt.

Nothing is more laughable than Trump’s feigned respect for the Second Amendment. On this issue, more than almost any other, the man is a pied piper who will say whatever he thinks his audience wants to hear.

In his 2000 book The America We Deserve, Trump wrote “I support the ban on assault weapons and I support a slightly longer waiting period to purchase a gun.” Furthermore, in the aftermath of the Pulse Night Club Shooting, Trump announced his support for “No-Fly, No-Buy” which would prohibit people on secret government watch-lists from purchasing firearms. Not only does this process run counter to the Second Amendment, but also conflicts with the Fifth, which guarantees Americans due process of law.

On the topic of the Fifth Amendment, few businessmen in this country have abused the power of eminent domain than Donald J. Trump. While the businessman insists the power is on the books to “build schools and roads,” he likes to use it to kick helpless old women out of their homes to enrich himself.

In a 2015, the Cato Institute’s  David Boaz chronicled Trump’s attempt to use the power of the government to confiscate an old woman’s home. He wrote:

For more than 30 years Vera Coking lived in a three-story house just off the Boardwalk in Atlantic City. Donald Trump built his 22-story Trump Plaza next door. In the mid-1990s Trump wanted to build a limousine parking lot for the hotel, so he bought several nearby properties. But three owners, including the by then elderly and widowed Ms Coking, refused to sell.

Trump turned to a government agency – the Casino Reinvestment Development Authority (CRDA) – to take Coking’s property. CRDA offered her $250,000 for the property – one-fourth of what another hotel builder had offered her a decade earlier. When she turned that down, the agency went into court to claim her property under eminent domain so that Trump could pave it and put up a parking lot.

Trump has not possessed the intellectual wherewithal to speak out on many of the other Amendments, but his records indicate that he would favor more government, not less. Nothing runs more counter to the conservative ideal than this pattern of behavior.

Finally, this entire discussion assumes that the next President will get to appoint a justice at all. Many in the mainstream have panicked that the court has continued with only eight justices since the passing of Antonin Scalia, but while the even number is potentially problematic, it is not unconstitutional. No where in the constitution is the number nine mentioned. In fact, the constitution does not mention the number of justices on the court at all. Because of this and their constitutional powers, a Republican controlled U.S. Senate could refuse to confirm any of Hillary Clinton’s Supreme Court nominees. Period.

Well, let’s get one thing out of the way first: the Constitution is completely silent on all this. It’s the president’s job to nominate and the Senate’s to provide “advice and consent,” but there’s no further textual explication…if a majority of senators refused to confirm anyone to any offices, or pass any legislation whatsoever, that’s their prerogative.

All it takes for the Republicans to stop Hillary’s justices is to just keep the Senate. But with the virtually unelectable nominee the party chose for the top of the ticket, who knows if that is possible?

There are some certainties in the American political system, but the Supreme Court’s behavior is not one of them. Not only has Donald J. Trump produced little substantive evidence that he would favor a limited government justice, but history shows that even they are not sure bets.

You can still vote for Trump; in fact you can vote for whomever you want. Just do not pretend like you are voting for him because you care about preserving the U.S. Constitution, because Donald J. Trump clearly does not.

You Can Donate To Hillary In Honor Of Bin Laden, But Not Chris Stevens