Hillary Clinton’s campaign website allows potential donors to make their donations in honor of famous dictators, but not slain Libyan ambassador Chris Stevens and other individuals linked to Clinton scandals.

A page on Clinton’s campaign website allows people to name an “honoree” for a donation to her campaign. The page lets people name almost anything as an honoree, from a specific person to a group to a concept.

Unsurprisingly, a lot of honorees are disqualified, such as donations in honor of the n-word, “faggot,” and Adolf Hitler.

But the page also prevents people from donating in honor of individuals like Libyan ambassador Chris Stevens (killed at Benghazi). 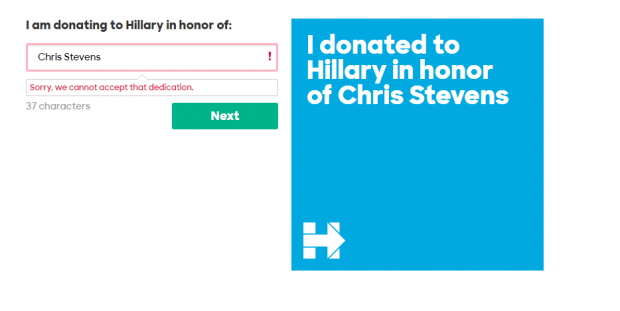 In fact, many people who carry a negative association with Clinton aren’t allowed to be honored in donations on her website. Other blocked names include:

On the other hand, the filter does allow many dictators, terrorists, and objectionable concepts to be honored. The Daily Caller News Foundation successfully cleared the filter with the following:

A donation in honor of Jerry Sandusky. [Screengrab]

Hillary Falsely Claims She Was In New York On 9/11

Will Voting Trump Protect SCOTUS and Save the Constitution?