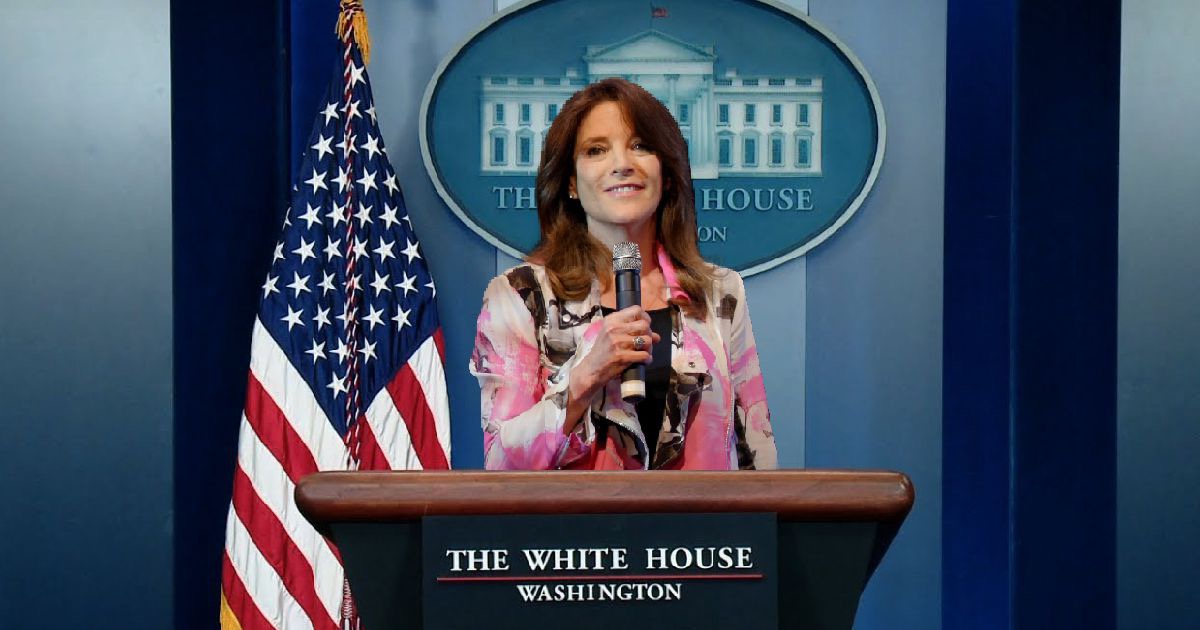 I genuinely like Marianne Williamson, and would prefer her to any of the major Democratic contenders for President.

She provides a form of moral clarity that’s genuinely authentic and sincerely heartfelt in a way not expressed by any American Presidents since Reagan and Carter. And she does so in a field populated primarily by liars and thieves. She has the ability to veer off-script and outside of the practiced, pre-packaged focus-group tested marketing gibberish that much of her competition relies on as a substitute for their lack of soul.

But let’s face it, Orbposters… it would take a course of miracles (yes, I said it) for Marianne to make the next debate. Her chances of being the actual nominee are right around Tom Steyer’s chances. If you’re asking “Who?” no one would blame you.

Inclusion in the next debate requires two things. The first is passing a hurdle of 130,000 unique donors, which she did this week. The second is reaching 2% in four recognized polls. As of this writing, she has made the 2% mark in exactly zero qualifying polls, and the cutoff date is less than a week away.

Like Mulder or Church of Today congregants, I want to believe. Unfortunately, there’s no reason to.

But, consider this just one moment…

If Democrats beat Trump next year, they’ll be pretty happy. But even those who will be happy he’s gone will be missing something whenever we return to a more… standard President. There will be no tweets about buying Greenland. No random self-anointing themselves as the chosen one in the middle of a press conference. No blooper-reel missteps off teleprompter. No press releases that are mistaken for satire. There won’t even be any covfefe left.

There’s only so much juice we’ll get out of President Warren’s latest 1/1,024 poll numbers or President Biden’s creepy, handsy hair-sniffing. Biden may be known to be gaffe prone, but he’s a Zima or a White Claw to Trump’s moonshine. As we scroll through social media or flip through channels, we’ll be scratching our arms, jonesing for White House entertainment if the woke party devoid of any humor wins.

This is why Marianne being named press secretary is so important.

She’s made her living off of words and inspiration. She’s been an advocate, a teacher, a lecturer, a spiritual leader, and a pastor. She has changed minds and opened hearts and been able to explain to those willing to listen just what underlies us and what underlies our nation. And her meme game and soundbites are on effing point.

There isn’t a question the White House Press Corps could ask that she could not answer. And she could do so with a deeper understanding of the underlying issue. There would be no policy specifics or nuances pressed that she couldn’t deflect by bringing it back to base principles.

Should Online Gaming be Legalized in the US? How Local Laws Can Lead to Federal Freedom

How to Avoid Losing Your Fitness Progress After a Break