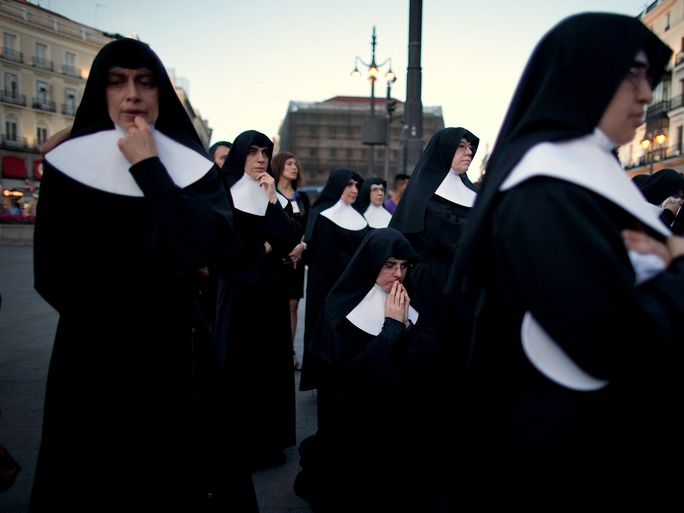 A convent of Illinois nuns has filed a lawsuit to shut down a Chicago-area strip club in their own backyard, alleging that there is a lot more than lap dances going on behind closed doors.

A hearing for the Stone Park strip club’s motion to dismiss the case will be heard Tuesday. The Missionary Sisters of St. Charles have filed suit against “Get It Entertainment,” the company operating the 20,000-square-foot “Club Allure.”

The lawsuit alleges the club violates state law by being within 1,000 feet of the convent and that the strippers actually engage in prostitution. The club is on the adjacent property just behind the back fence of the convent.

The lawsuit, filed with the help of the Christian legal group The Thomas More Society, alleges that the club’s policy of allowing “high-friction rubbing” qualifies as prostitution under Illinois law.

“During their interactions with patrons or customers, plaintiffs have determined that Club Allure’s dancers or entertainers engage in direct and immediate physical, high friction full contact with customers’ or patrons’ bodies, and specifically the genital or other sexually sensitive areas thereof, for the purpose of causing sexual arousal or gratification of either or both participants. . .” the suit states. “Its advertisements offer its patrons, in exchange for additional fees, a variety of adult entertainments including inter alia ‘lap dances,’ ‘hump dances,’ ‘bed dances,’ or even ‘threesomes’ with ‘dancers’ or ‘entertainers.’”

The club argues that it went through the proper zoning procedures before building its establishment in September 2013.

“The construction and opening of the Club represented the transformation of a formerly blighted, unused piece of property within the Village into a developed, commercial parcel providing a much-needed new revenue source for that tiny municipality,” they argue in a motion to dismiss.

The lawsuit also alleges that a bartender for the club left work drunk and died in a car accident, and that the owner of the club ordered his employees not to speak publicly about it.

The nuns are particularly perturbed because of a 100-foot high billboard in the parking lot of the club featuring a sultry woman, not to mention the “intense and flashing lights” emanating from the club.

The convent includes three chapels for worship as well as a training school for new sisters and a small retirements center for older nuns.

“Among other things, they have observed garbage being tossed out of cars, as well as littering by pedestrians, including liquor bottles, contraceptive packages and/or wrappers, drunken people stumbling along the road or even urinating in public,” the suit states.

A judge will hear a motion to dismiss the case Tuesday.