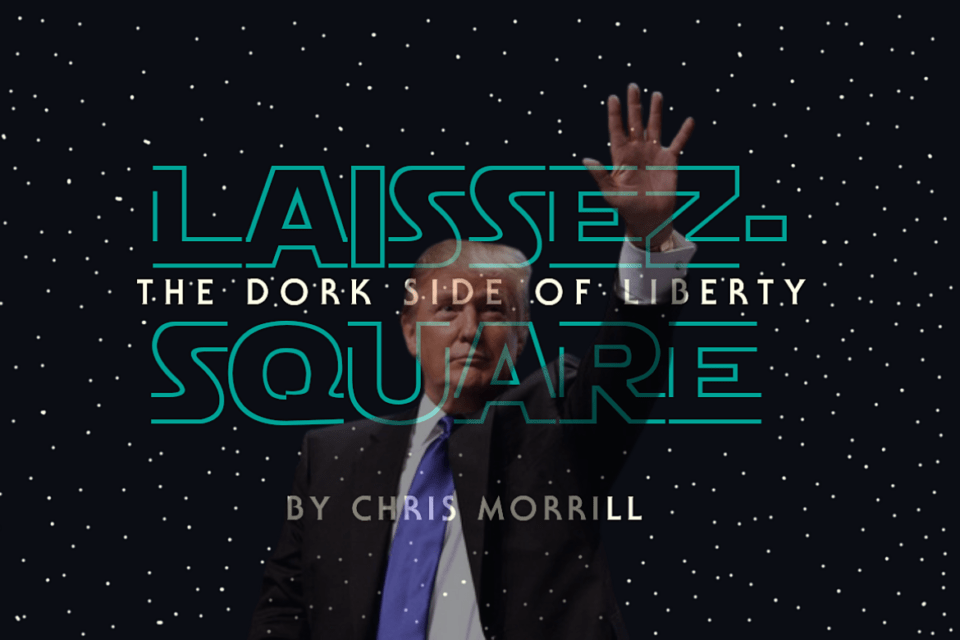 It’s no huge secret that I was never a fan of Donald Trump. His bluster always rubbed me the wrong way, even well before he came down the escalator on that fateful day in 2015 and announced his presidential candidacy.

I honestly assumed his presidential run was a publicity stunt and he would flame out early. He got off to a roaring start in his very first campaign speech, where he famously smeared Mexican immigrants as rapists (among other things.)

In any decent universe, the campaign would have been over right there. But something strange happened: people on the right loved it. And the more crazy, off the wall shit Trump said, the more popular he became. People said things like “he’s only saying what the rest of us are thinking!” or “he tells it like it is!” Saying either such thing may be a tacit admission that you are, in fact, an asshole.

Meanwhile, the American left had smeared every Republican since Eisenhower as a Nazi (at worst) and a fascist (at best.) So when an actual fascist (okay, fascist-adjacent) candidate showed up, they had no credibility when attacking him as such.

When it became clear that somehow Trump had tapped into something big (but not necessarily good) on the American right, however, I still thought there was no way he would win the Republican nomination. And when he did win that nomination, I figured he had no chance of knocking out Hillary. Yet, thanks to about 80,000 votes spread across Pennsylvania, Wisconsin, and Michigan, he did exactly that.

His presidency has been a wild ride, to say the least. I’m not sure what else we should have expected; his “movement” seemed to be largely based on anger. That kind of thing usually doesn’t end well. While it is true that American politics often swings like a pendulum, I’ll probably never understand how we went from “hope and change” to “rage and more rage.” Instead of preaching the lifting up of people, he focused more on tearing people down. It was a weird time in American politics.

One usually doesn’t have to wait until Inauguration Day to write up a post-mortem on a presidency. With Trump, however, there was never a dull moment. There were still many questions left even at the very end. Take, I don’t know, for example, the Capitol riot of January 6 and his subsequent historic second impeachment on January 13. Then there were questions about who he might pardon in his final hours. (Hint: no Snowden, no Assange, no Ulbricht, not even Joe Exotic. Drat.)

But now that his presidency is finally over, here is the good, the bad, and the ugly according to yours truly. This piece is quite long, so I am going to split it into two pieces. This week we’ll handle the good and part of the bad. Next week, we’ll handle the rest of the bad and all of the ugly.

As hinted at in the title of this piece, President Trump absolutely crushed it when it came to appointing judges. He appointed over two hundred federal judges, including three Supreme Court justices. Three Supreme Court appointments in one term is not the record (somehow William Howard Taft managed six), but it’s impressive nonetheless. And all are staunchly conservative. Trump actually bothered to listen to people in the know, such as the Federalist Society, before making these appointments. (It would have served him well to listen to them on some other things.)

His success at appointing judges was partly luck, however. (Luck is a big part of his life story.) The Republicans gambled big and won then they decided to stonewall President Obama’s nomination of Merrick Garland in 2016, in hopes that Trump would beat Clinton, which seemed a rather fanciful idea at the time. Then Democrats gambled big and lost when Ruth Bader Ginsburg had the chance to retire before Obama left office but she didn’t. Consider also that filibusters for Supreme Court nominations went by the wayside thanks to the “nuclear option” in 2017; without this, none of Trump’s Supreme Court nominees would likely have been confirmed.

One of the Trump administration’s greatest legacies will be deregulation on a scale not seen since Reagan (though, our friends at Reason would argue that it’s a mixed bag.) We also got some sweet tax cuts. The economy was certainly going great guns up until the COVID-19 pandemic, as well. Wall Street was apparently the only part of New York City (outside Staten Island) that really dug this presidency.

Did President Trump start any new wars? No. Did he get us completely out of any of the old wars? Also no. But baby steps are better than no steps.

The Trump White House, in its last week, actually put out a list of the administration’s accomplishments. It was posted at whitehouse.gov, but then taken down shortly after President Biden’s inauguration. Fear not, it is preserved for posterity here. In the typical humble Trump fashion, this brag sheet runs 12,155 words and twenty-one pages (with a size 10 FreeSans font.)

I will also say this: Trump was genuine. Genuinely awful most of the time, but genuine just the same. His candor was refreshing even if it was often also usually aggravating. And his Twitter account was occasionally funny. So there’s that.

The bad (brace yourselves, this is a long section)

Of all the lies Donald Trump told during his campaign and presidency, of which there are literally thousands, perhaps the most irksome one was that he would build a wall on the southern border and make Mexico pay for it. As of this writing, only about 450 miles of that has been built, some of which was replacement for existing fencing. (The actual border is almost two thousand miles total.) And it goes without saying that Mexico is paying zilch.

President Trump did some very non-libertarian things regarding trade, and he did them unilaterally. He never saw a tariff he didn’t like, which is a stark reversal from the previous eighty-plus years of Republican presidents. He also savaged NAFTA and bragged about replacing it with the USMCA, but the changes are largely cosmetic.

The former president also did some very non-libertarian things regarding immigration, and again largely unilaterally. The infamous “Muslim ban” was maybe the most notorious action; other greatest hits include the actions against DACA and family separation on the Mexican border.

(Perhaps this abuse of executive power will lead to some future restrictions on the same? Don’t bet on it. Democrats want to be able to do stuff like this, too, when their guy/gal is in charge. And we didn’t even get into pardon power.)

The Donald’s use of Twitter was also quite exasperating. It is estimated that he sent a staggering 34,000 tweets from the beginning of his campaign in 2015 to the bitter end in 2021. Many of these were at odd hours of the night and the content would vary wildly. He favored Twitter as his method of communication so much so that a Congressman introduced the wonderfully titled COVFEFE Act that would have officially made all of his tweets government records. It unfortunately failed.

(One major upside to the Biden presidency is that you’ll never wake up in the morning and wonder what crazy bile your president spewed on Twitter in the overnight hours.)

Some other aspects of Trump’s governing style were troublesome. Instead of a coherent strategy to achieve specific goals, he largely practiced government-by-tantrum. He leaped from crisis to crisis, many of his own making, putting out fires only to start new ones.  He has the attention span of a gnat and an intellectual curiosity about as deep as your average puddle—and he governed accordingly.

Exaggeration, puffery, braggadocio, and wild promises were hallmarks of this presidency. One of the other most glaring lies Mr. Trump (repeatedly) told during his administration was that he had a wonderful, great health care plan that would replace Obamacare. That mysterious, elusive plan was never unveiled because, much like Santa Claus, Sasquatch, or Candy Mountain, it never existed. At best it was a MacGuffin, at worst it was a delusion.

President Trump was unpredictable on policy, turning on a dime and contradicting himself (and his subordinates) almost effortlessly time and again. But he was very predictable behavior-wise, in that he would instantly react to anyone’s criticism of him by lashing out against them on Twitter. And if you spoke nice about him, he would speak nice about you. Scratch his back and he’d scratch yours. Loyalty was everything. The boss is always right, and if he’s not, it’s always someone else’s fault. That’s classic crime boss behavior.