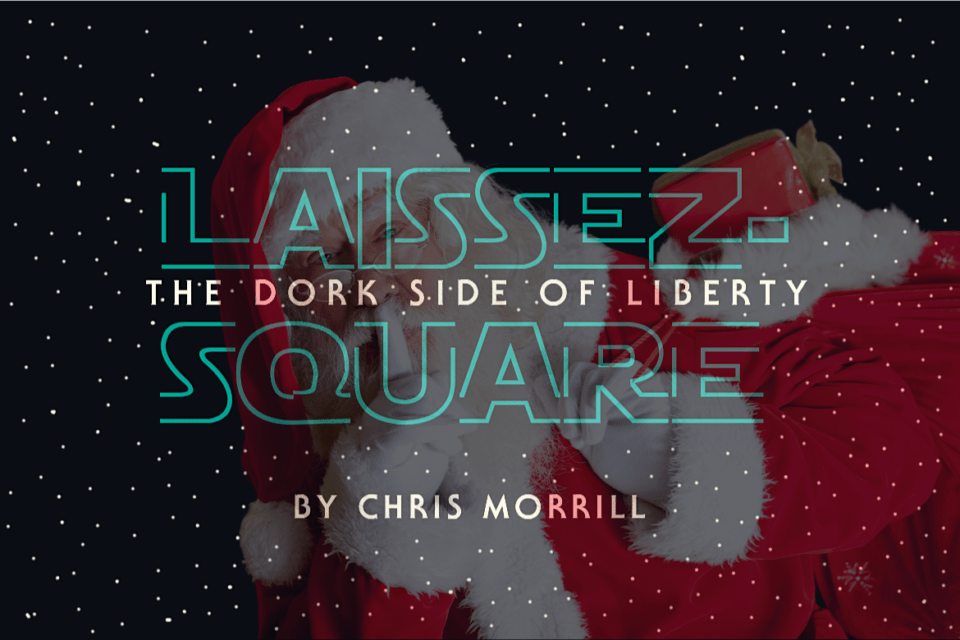 “My life is a lie! Somebody’s gotta get stabbed!”

(Disclaimer 1: I do not have children. After you read this, you will probably say, “Thank God.”)

When I was a child, my family took Christmas very seriously. Though we weren’t what you would call serious churchgoers, we went all out for Yuletide. Lights, decorations, a blinged out tree, and of course the whole Santa Claus thing. My father, to his credit, was an exceptionally good Santa. Though we often didn’t have a lot of money, Santa always managed to show up and do his thing.

I was the most fervent Santa believer of all the kids in our house. He generally brought me what I wanted, too, except for that one year I went overboard and requested my own personal flying reindeer (as noted in a prior piece.) That was a bridge too far even for Ol’ St. Nick.

But all good things must come to an end. Eventually, the truth must come out. When my folks finally told little Chris the truth about Santa, I of course did not react well. In fact, I bawled my adorable little eyes out.

My dad’s reaction? To grab a camera and take a picture of my caterwauling. Isn’t his trauma so cute?

Now that I am older, jaded, and thoroughly damaged, I look back on the whole Santa thing and think: what the fuck?

If one views the Santa Claus mythos at face value, it’s batshit crazy.

He supposedly lives at the North Pole—where there is no actual land. Is he on a huge ass boat? Does he hole up in some sort of Bond villain-ish underwater lair? Did he build his evil empire on a sheet of (literal) thin ice?

He supervises a team of elves. How are they paid? What are the benefits? Are they unionized? Are the elves a minority group that is being exploited? Are they, in fact, slave labor? Does the Thirteenth Amendment apply to the North Pole?

Who has jurisdiction over the pole, anyway? Canada? Russia? Denmark (via Greenland?) Are NATO and NORAD aware of this possible national security threat lurking in the middle of the Arctic Ocean?

Santa tells young children to sit on his lap and tell him all of their most base, greedy, material desires, which he will grant them…in exchange for certain behaviors. Nothing creepy about that. Grooming much?

Is Santa, for lack of a better term, a pedo? Or at least pedo-adjacent? Did he take the ol’ sleigh down to Epstein Island for a little jailbait action? Check those flight logs. Does the North Pole bear more than a passing resemblance to Neverland Ranch? Is he a prime candidate for chemical castration? How did this creeper survive the “Me Too” purges? Concerned citizens want to know.

He enters millions (or billions) or homes in the middle of the night undetected. Nothing creepy about that either, right?

What sort of acid-inspired fever dream thought up flying reindeer in the first place?

He is omniscient, knowing whether every single one of the 2.2 billion children on the planet has been good or bad for the last year. Does he accomplish this by some sort of magic? Or, does he have a 24/7/365 surveillance system that would be the envy of the NSA and the CIA even in their wettest of dreams? What would Edward Snowden think about this gross violation of privacy rights?

He is also omnipresent, at least on Christmas Eve, visiting the households of those 2.2 billion children in under twenty-four hours.

So we have omniscience and omnipresence. The only ingredient missing here is omnipotence. If Santa can somehow pull that off, then He isn’t just some jolly old elf. Santa is God. That has some pretty serious theological implications. Santa can not only bring you presents if you’ve been good, he can send your eternal soul to Hell if you’ve been bad. (The sad thing is, if this was made into a new religion tomorrow, it wouldn’t even be the craziest one out there.)

Are Santa’s acts a violation of the Non Aggression Principle? Does he only come into homes when he’s been invited? What constitutes an invitation? Cookies and milk? Does he just telepathically know? Is a child’s invitation legal even if his/her parents object?

You know who else requires an invitation to enter your home? Vampires, that’s who. Nobody’s ever seen Santa Claus and Count Dracula in the same place at the same time, you know. The mind wanders…

Entering a home without permission is trespassing; entering that home not only without permission but when people are present is straight up home invasion. If you catch Santa poking around downstairs at midnight, you are legally allowed smoke him. That’s Castle Doctrine, Holmes. Double tap that corpulent bastard in America and no authority will prosecute you. (Except maybe renegade St. Louis prosecutor Kim Gardner, who will indict your grandma’s fruitcake if it is politically to the right of Che Guevara.)

Even if we accept that there are many problems with the Santa mythology: why did we create him in the first place?

Essentially, Santa exists as a form of behavior modification. Be good, you are rewarded. Be bad, and you will be punished.

But why outsource this? Why lie? If I had a child, I would want him or her to know that I was the one rewarding him or her for good. I would want the credit. Fobbing it off on a fictional third party just seems lazy and wrong.

The same goes for punishment. If Santa exists as the holiday carrot, then Krampus and Belsnickel act as the holiday stick. But the same thought applies: why outsource your punishments? I wouldn’t want my kids believing some mythical anti-Santa is going to smack them if they get out of line;  I would rather they know it’s me that would be beating that ass. And not Christmas Eve, either; your bundle of switches or lump of coal will be delivered tout de suite.

The fact that Santa, Krampus, and Belsnickel all have Germanic origins tell you all you need to know about German culture. It’s not enough to terrify Poland, France, or Europe in general; they must also terrorize their own children. No way these folks could start two world wars and kill millions, right?

(Disclaimer 2: I am largely of German descent, so I can say this shit.)

Lying to kids at a young age only to reveal your treachery later plants seeds of distrust that can lead them to later question all sorts of other things. It’s a slippery slope from Santa to the void.

If you don’t use Santa as a behavior modification tool, then he’s just a prank. A fun thing you do with kids, right? What’s the harm?

But what fun is it to punk a child? There’s not a lot of sport in it. Don’t pat yourself too hard on the back after you pull a fast one on a rug rat. Or take pictures of him crying after you reveal your long running elaborate ruse.

If I were fortunate enough to have children of my own to traumatize, I would choose to do it in different (yet probably no less Teutonic) ways. Regardless, I would certainly advise them to stay off the laps of strangers who promise them goodies in exchange for who knows what. Nothing good comes from that. That’s just common sense.

This is the conversation I would have with my imaginary child regarding Kris Kringle:

“Life is meaningless. Nothing you do matters. You are just one individual among a species of primates with billions of relatives living on a tiny rock in the middle of nowhere.”

Just kidding. I would cover that later. But as to Father Christmas, I would actually respond:

“No, it’s total bullshit. But you’re real. I’m real. Our family is real. Beyond that, everything is negotiable. And oh by the way, there’s no such thing as ‘free’, and taxation is theft.”

In a more rational world, we’d march Santa Claus, Elf on the Shelf, Silver Spurs, the Easter Bunny, and the Tooth Fairy up the stairs to the guillotine and let the blade sing.

Fighting Loneliness During the Holidays