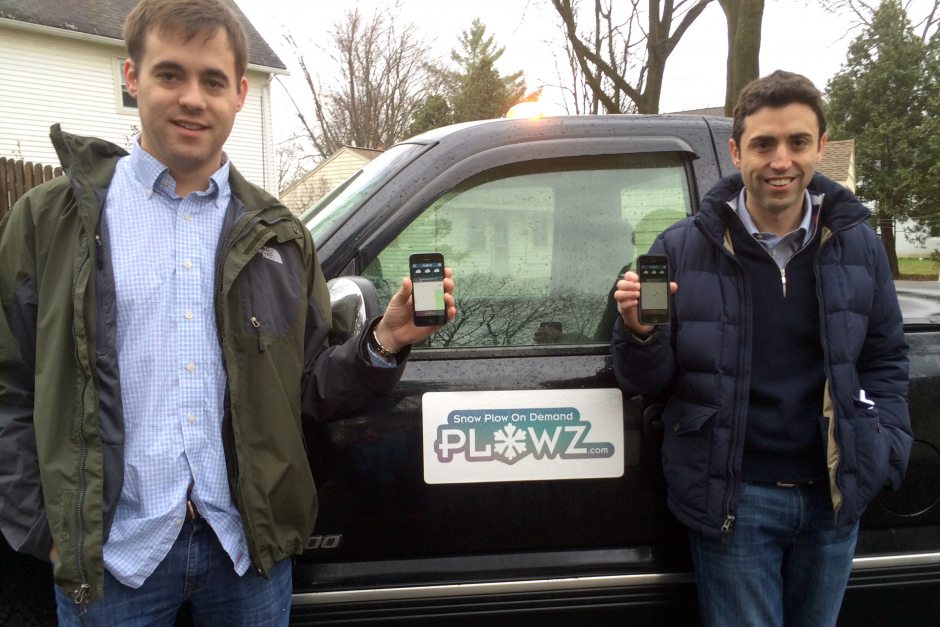 Snow removal and lawn cutting businesses have finally shifted their way into the Uber model style of on-demand services! Much like the taxi service Uber, users can request a snow plow to clear their driveway through the use of a Smartphone app.

Plowz and Mowz is a startup that launched in 2004, allowing individuals to have an assigned plow arrive at their driveway within minutes, AccuWeather reports.

Co-founders Wills Mahoney and Andrew Englander were college roommates who began with a fleet of eight trucks and, after experiencing success, soon expanded from their Syracuse, N.Y. base, to the midwest and mid-Atlantic. Today, they also provide lawn cutting services that include tedious chores such as leaf removal. Working exclusively with established businesses that own commercial grade equipment, the app guarantees quality service. When the work is done, customers are sent a photo of their freshly plowed driveway as a confirmation.

Prices are determined by the length of the driveway and location.

Operating in 30 of the biggest markets in the U.S., including Denver, Minneapolis, Boston, and Chicago, Plowz and Mowz covers a 30- to 40-mile radius on average in those markets.

“A city like Boston demands a higher price point than a city like Syracuse,” Mahoney said. Cities in warmer regions, such as Florida would demand more from their lawn mowing operations.

This provides a great resource for those who are physically unable to shovel themselves out of their driveway, as well as avoiding many health and injury risks to them.

This concept has provided Mike Heffernan, co-owner of Imperial Seal in Minneapolis, a company that does seal-coating and asphalt repair services during the spring and summer, a job during his offseason.

“It’s been a great resource for my business,” Heffernan said. “It’s a great supplement to what I have already going when it snows out.”

Those who are not thrilled about this concept are business owners such as Boston-based PlowMe, also an on-demand company. Founded in 2012, CEO Yeh Diab pitched the idea of an app to a contractor who was looking to make some additional money on the side. Diab later shifted the strategy to a route-based subscription service, when the first year provided very little snow fall, which brought him a steadier stream of revenue.

Diab claims that his drivers dislike on-demand because they don’t like showing up at a driveway sight unseen and prefer not to disappoint their regular customers by taking an off-the-cuff job.

On PlowMe’s website, the service is described as “like buying a train ticket for your home.” Diab said snow services in general are more like buses that have regular routes and less like hailing a cab or requesting a ride with Uber. Still, he fails to see this as a full-time business and believes that the Uber-like snow plowing is a niche that can be met for drivers under the right circumstances; such as picking up work during a slower time, as is the case for Heffernan.

Sean Griffith, co-founder and CEO of Plow Me Out, said there are at least five different on-demand applications throughout the country that offer variations on the idea. Griffith wrote in his email interview with AccuWeather that he had decided to enter the industry based on the amount of snow that’s fallen over the past few winters.

“It largely came from a personal pain of having to shovel our own driveways,” he said.

One of the reasons Griffith thinks people will be excited about the on-demand product is to have options and added convenience, because it can be difficult to find a plow operator during a storm.

In addition to all the jobs these services will continue to provide people, Griffith says that they are looking to provide convenience to the consumer.

“We look at this as an undeveloped area of snow removal, and [it] complements the way [the industry] operates now,” Griffith said. “We’re not really interested in taking away from the contracted service. What we want to do is convert some of the people who would shovel and maybe a few that have a snowblower to using our service when it’s convenient for them.”