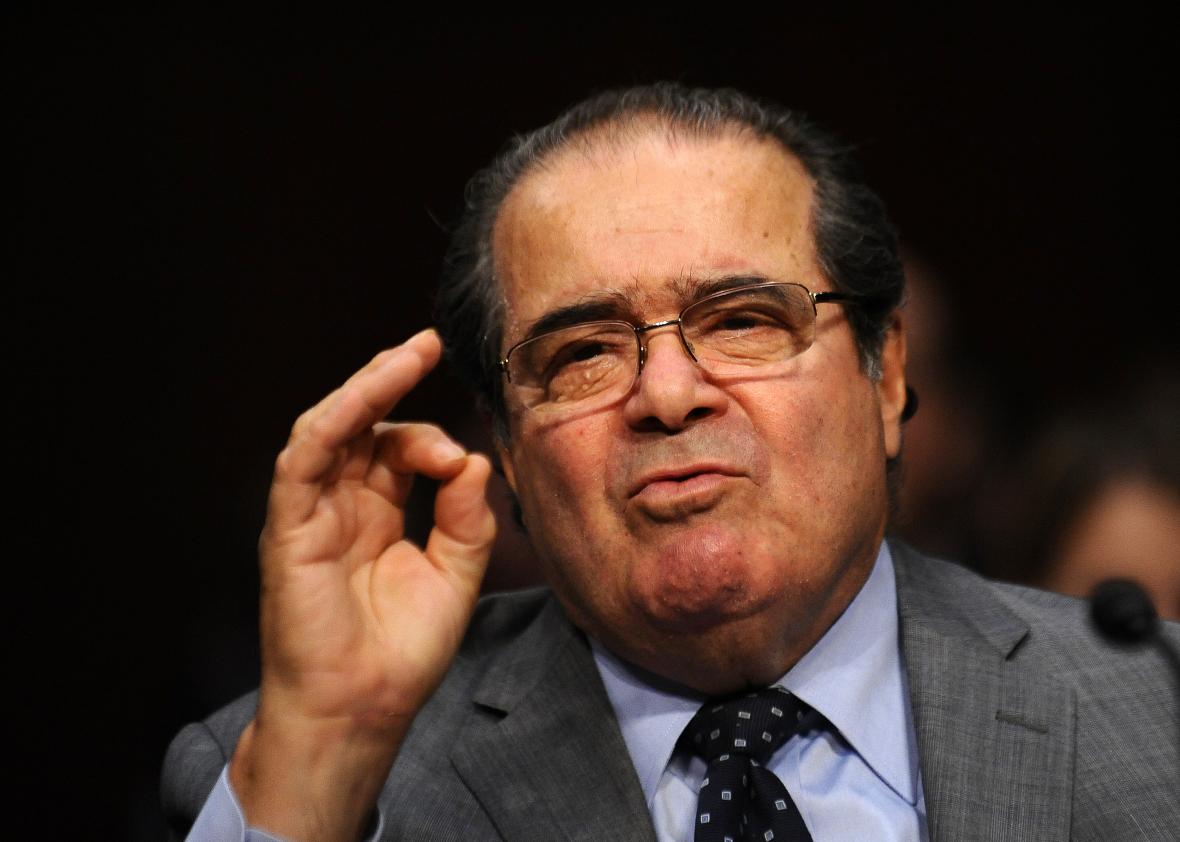 Though law rarely makes for literature, the late Justice Antonin Scalia — dead one year ago today — made the peppery dissent a drama of its own right.

Eliot Milco, writing at First Things, described Scalia as the “mighty rearguard in our long and slow defeat,” an apt description of both his political consequence and his prose style.

The Supreme Court was similarly dispossessed one year ago today, when Scalia’s unexpected death deprived the bench of its finest stylist since Justice Robert Jackson (whose seat, appropriately, Scalia held). On this anniversary of his passing, here are selected excerpts of the late justice’s writings.

That is what this suit is about. Power. The allocation of power among Congress, the President, and the courts in such fashion as to preserve the equilibrium the Constitution sought to establish – so that “a gradual concentration of the several powers in the same department,” can effectively be resisted. Frequently an issue of this sort will come before the Court clad, so to speak, in sheep’s clothing: the potential of the asserted principle to effect important change in the equilibrium of power is not immediately evident, and must be discerned by a careful and perceptive analysis. But this wolf comes as a wolf.

If one assumes, however, that the PGA TOUR has some legal obligation to play classic, Platonic golf–and if one assumes the correctness of all the other wrong turns the Court has made to get to this point–then we Justices must confront what is indeed an awesome responsibility. It has been rendered the solemn duty of the Supreme Court of the United States, laid upon it by Congress in pursuance of the Federal Government’s power “[t]o regulate Commerce with foreign Nations, and among the several States,” to decide What Is Golf. I am sure that the Framers of the Constitution, aware of the 1457 edict of King James II of Scotland prohibiting golf because it interfered with the practice of archery, fully expected that sooner or later the paths of golf and government, the law and the links, would once again cross, and that the judges of this august Court would some day have to wrestle with that age-old jurisprudential question, for which their years of study in the law have so well prepared them: Is someone riding around a golf course from shot to shot really a golfer? The answer, we learn, is yes. The Court ultimately concludes, and it will henceforth be the Law of the Land, that walking is not a “fundamental” aspect of golf.

The Imperial Judiciary lives. It is instructive to compare this Nietzschean vision of unelected, life-tenured judges — leading a Volk who will be ‘tested by following’ and whose ‘very belief in themselves’ is mystically bound up in their ‘understanding’ of a Court that ‘speak[s] before all others for their constitutional ideals’ — with the somewhat more modest role envisioned for these lawyers by the Founders.

The opinion is couched in a style that is as pretentious as its content is egotistic. It is one thing for separate concurring or dissenting opinions to contain extravagances, even silly extravagances, of thought and expression; it is something else for the official opinion of the Court to do so.

If, even as the price to be paid for a fifth vote, I ever joined an opinion for the Court that began: “The Constitution promises liberty to all within its reach, a liberty that includes certain specific rights that allow persons, within a lawful realm, to define and express their identity,” I would hide my head in a bag. The Supreme Court of the United States has descended from the disciplined legal reasoning of John Marshall and Joseph Story to the mystical aphorisms of the fortune cookie.

It is presumably in order to avoid these questions that the Court concludes that federal Exchanges count as state Exchanges only “for purposes of the tax credits.” (Contrivance, thy name is an opinion on the Affordable Care Act!)

As to the Court’s invocation of the Lemon test: like some ghoul in a late-night horror movie that repeatedly sits up in its grave and shuffles abroad after being repeatedly killed and buried, Lemon stalks our Establishment Clause jurisprudence once again, frightening the little children and school attorneys of Center Moriches Union Free School District. Its most recent burial, only last Term, was, to be sure, not fully six-feet under: our decision in Lee v. Weisman conspicuously avoided using the supposed “test,” but also declined the invitation to repudiate it. Over the years, however, no fewer than five of the currently sitting Justices have, in their own opinions, personally driven pencils through the creature’s heart (the author of today’s opinion repeatedly), and a sixth has joined an opinion doing so….

The secret of the Lemon test’s survival, I think, is that it is so easy to kill. It is there to scare us (and our audience) when we wish it to do so, but we can command it to return to the tomb at will…. Such a docile and useful monster is worth keeping around, at least in a somnolent state; one never knows when one might need him.

President Donald Trump will speak by phone with Justice Scalia’s widow, Maureen, later this afternoon. He has nominated Judge Neil Gorsuch of the 10th U.S. Circuit Court of Appeals to succeed Scalia on the Supreme Court.