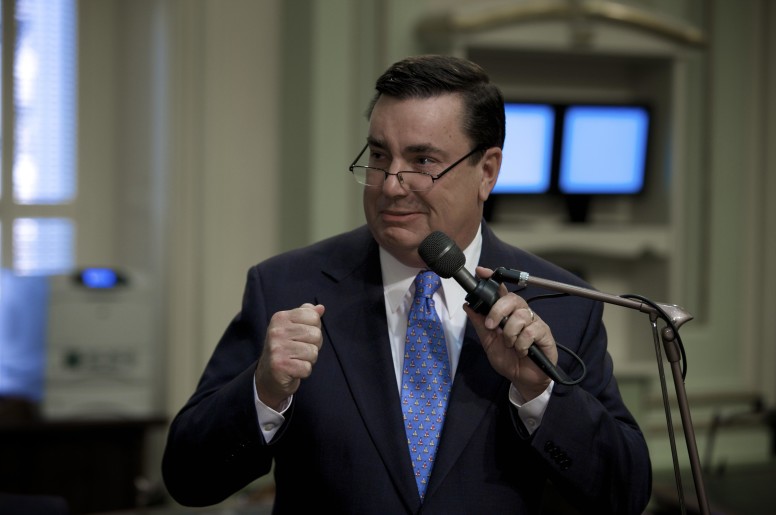 Right now, in the state of California, a bill is circling the halls of Sacramento which aims to turn the entire state into a border to border sanctuary for illegal immigrants. One Republican State Senator however, is vociferously speaking out against it, saying that the bill “shields felons in our jails and prisons.”

California Senate Bill 54, titled “Protecting California People & Prosperity Against Immigration Enforcement,” was sponsored by CA Senate President Pro Tem Kevin De Leon (D-24 Los Angeles). The bill’s intention, as described by De Leon, is to “prevent the use of state and local resources, including personnel, for immigration enforcement; and the creation of a federal registry.” In other words, the bill aims to do what some of the progressive large cities inside the state have already done, which is to shield illegal immigrants from deportation by the federal government by precluding local and state agencies from working in conjunction.

Standing opposed to De Leon, and SB54 is State Sen. Joel Anderson (R- 38 San Diego). He told The Libertarian Republic (TLR) that the bill, t (SB54), is a bad bill for Californians, and that it goes too far because it “shields felons in our jails and prisons.” Anderson stated that the bill as written would not only blanket people who have broken immigration law, but it would also protect those who have committed felonies and may already be in prison. “I don’t want murderers, rapists, child molesters or armed-robbers protected by the state to be returned to our neighborhoods.” he told TLR. He went to explain that his district, encompassing about 30% of San Diego County, has enough crime without releasing those illegal immigrants who should be returned home.

When Anderson was pressed about what the Republican party in California, which is waining, can do to stop these efforts by the Democrats, he said, “The Republican party in California is now a ‘super-minority,’ we don’t control any of the 5 Constitutional offices, and it’s obvious that the tail does not wag the dog.” He went on to explain that this is why he is speaking up, to raise awareness of what the bill implies, beyond the surface of it, and what its affects will be on his constituents and all Californians. Anderson explained that he has started a petition to collect the voices of all those who oppose the “Sanctuary State” bill on his website (link below), and that he plans on presenting this petition to Sen. President De Leon, hoping it will be enough to sway others away from voting for SB54 or allow for amendments to it.

Sen. President De Leon, in defending his bill however, may have opened the door to more criticism than he intended. As on the floor of the California Senate, he appeared to out his family, when he said that “half” of them were in the United States illegally.

In response to this bill, President Donald Trump has threatened to pull federal funds from the state of California, citing the theft of Social Security cards and numbers as a major reason illegals should be deported. De Leon wasted no time in responding to the President, saying in an interview with KPCC 89.3’s “Air Talk” with Larry Mantle, “…the vast majority of immigrants- hard working immigrants- have done that. I can tell you I have family members who came here as undocumented immigrants and they did the same thing. That’s what you need to survive this economy.”

Sen. Anderson appeared on Fox News’ “Fox and Friends” where he was asked about the odds that SB54 passes in California, to which he said, “Well, with a super-majority in one Party’s hands and all 5 Constitutional offices, of course we will.”

Scalia Died One Year Ago Today. Here Are His Best Writings.