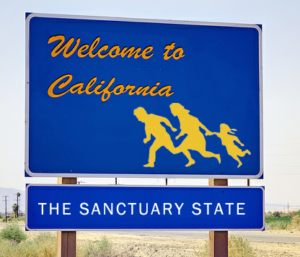 In response to President Donald Trump’s recent actions on immigration, California is looking to prohibit local law enforcement agencies from cooperating with federal immigration authorities, effectively making a sanctuary out of the nation’s largest state.

The state of California, whose government is controlled by a supermajority of Democrats, is looking to enact measures that Democratic lawmakers say would protect immigrants from the crackdown coming from the White House.

The legislation, SB54, which was written by Senate President Pro Tempore Kevin de Leon of Los Angeles, comes up for debate less than a week after Trump signed an order threatening to withdraw some federal grants from jurisdictions that bar officials from communicating with federal authorities about someone’s immigration status, reports CBS2.

Along with SB54, The Judiciary Committee will consider a fast-tracked piece of legislation which would spend state money, in an amount that has not been disclosed, to provide lawyers for people facing deportation, CBS2 says.

The contention over immigration, illegal immigrants, and bombastic rhetoric leaving the White House has reached a boiling point across the nation, but in California especially after Kate Steinle, 32, was fatally shot in 2015 by Juan Francisco Lopez-Sanchez, who was in the country illegally after multiple deportations to his native Mexico. Lopez-Sanchez, who told police the gun fired by accident, had been released from a San Francisco jail despite a request from federal immigration authorities that he be held in custody for possible deportation. Trump often cited the Steinle case during the campaign, explains CBS2.

This action by the Golden State should not be expected without criticism from the highest office in the land, as Trump has shown he is not afraid to confront his opposition. In fact, in a similar matter, acting US Attorney General Sally Yates was relieved of her duty by Trump on Monday night after she fought the legality of the President’s executive order on immigration saying:

How Searching For Alien Life Just Got 10,000 Times Easier

Solar Company Goes Bust After Getting Millions In Taxpayer Cash