Scaramucci reportedly called New Yorker reporter Ryan Lizza and proceeded to go on a wild diatribe in which he called White House chief of staff Reince Priebus a “fucking paranoid schizophrenic” and defended the purity of his intentions by saying that, unlike Steve Bannon, he’s “not trying to suck [his] own cock.”

Scaramucci made the unprompted phone call to press Lizza on which White House staffer had leaked him information about a dinner Trump shared with Sean Hannity and Fox News’ executive Bill Shine. After Lizza refused to surrender the leakers name, Scaramucci responded by threatening to fire the entire White House communications staff.

Trump reportedly loved Scaramucci’s rant, according to Axios Friday. While Trump appreciated Scaramucci’s aggressiveness, the same cannot be said of the White House staff, some of whom are reportedly considering resigning in the wake of the report.

Scaramucci believed he was off the record during the conversation although he did not make that clear to Lizza when the conversation began, according to a source close to the communications director. He responded to the report with a Tweet, in which he said “I made a mistake in trusting in a reporter. It won’t happen again.” 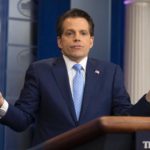 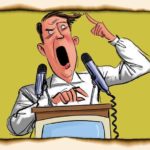