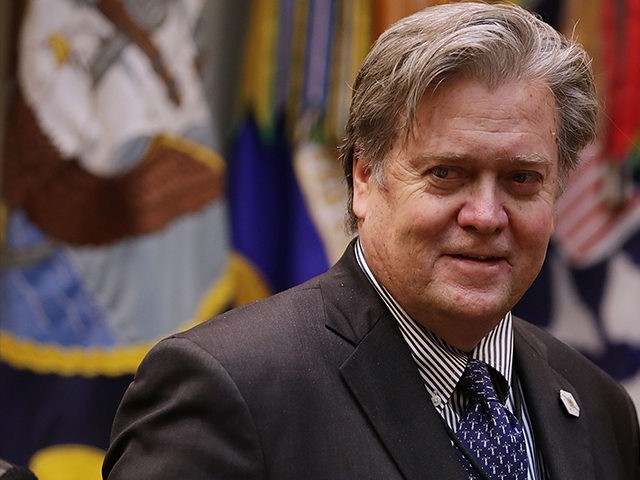 The special counsel’s office interviewed former White House strategist Steve Bannon for the second time on Friday, this time about any interactions between the Trump campaign and Roger Stone, according to a report.

The interview with Bannon, first reported by The Washington Post, is the latest indication that Special Counsel Robert Mueller is speeding up an investigation into Stone.

Mueller and his team are interested in finding out whether Stone, a longtime friend of President Donald Trump’s, had advance knowledge of WikiLeaks’ plans to release emails stolen from the DNC and Clinton campaign chairman John Podesta.

Stone has denied wrongdoing and claims he did not know about email hacks before they occurred. He has also denied having direct contact with Wikileaks or its founder, Julian Assange.

Mueller indicted 12 Russian nationals on July 13 who were allegedly involved in hacking the emails and disseminating them through WikiLeaks.

“Mueller’s team has been very professional and courteous,” Bannon told The Post. “Out of respect for the process, I will not discuss my interviews with them, but people shouldn’t believe everything they read.”

The former Breitbart News chairman did not respond to The Daily Caller News Foundation’s request for comment.

The prosecutors from the special counsel’s office previously met with Bannon for more than 20 hours in February and was reportedly interviewed at length about Trump’s decision to fire James Comey as FBI director. In addition to investigating whether the campaign colluded with Russians, Mueller is investigating whether Trump obstructed justice by firing Comey.

Mueller’s focus on Stone has been apparent for months. At least several associates of the Republican political operative have been interviewed or subpoenaed by Mueller.

Stone’s former social media adviser, Jason Sullivan, told The Wall Street Journal that Mueller’s team contacted his attorneys in recent days following up on questions about whether he had any information regarding Stone’s contacts with Wikileaks.

Sullivan, who appeared before a grand jury on June 1, said that Mueller’s team appears focused “pretty much fixed” on investigating whether Stone cooperated with Assange.

“They keep asking me in 100 different ways, did you ever hear anything at any point?” Sullivan told The Journal.

Stone, who has known Trump for nearly four decades, claimed during the campaign to have had contact with Assange, who lives under asylum at the Ecuadoran embassy in London.

Stone has backed away from those claims since ending up on the radar of investigators. He has said he had no advance knowledge of the hacks and that he heard of plans to release the documents through intermediaries.

Stone claims he was told of Assange’s plans by Randy Credico, a left-leaning comedian who had contact with Assange during the campaign.

Stone also recently provided The Daily Caller with an email he received on July 25, 2016, that he says was the source for some of his claims about forthcoming releases of Clinton-related documents.

Soon after receiving that email, Stone began claiming publicly that he had knowledge of Assange’s plans.

WikiLeaks has denied ever meeting with Stone or coordinating with him.