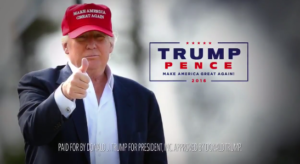 Though the Republican National Committee (RNC) has publicly said they are behind their presidential nominee Donald Trump, it would appear that those comments may be nothing more than lip service for the sake of calmness.

According to an analysis done by Politico on the Trump Campaign finance records, the RNC has not spent a dime on television advertisements propping up Trump since he became the party’s likely nominee. Also shocking is the fact that the party has only put out about $321,000 of money attacking Democratic Presidential nominee, Hillary Clinton, all of which was spent last fall, prior to Trump’s nomination.

The RNC’s lack of spending for Trump highlights the way the party has treated past nominees in 2008 and 2012, when the party spent tens of millions on independent expenditures, which were essentially TV ads, direct mail campaigns, and phone banks, which either supported their candidate or attack the party’s chief rival.

In 2004, the committee spent $18.2 million on independent expenditures — or IEs, in campaign parlance — boosting George W. Bush’s reelection bid. In 2008, the RNC’s IE spending surged to $53.5 million in support of John McCain’s campaign against Barack Obama. And in 2012, the RNC spent $42.4 million on IEs boosting Mitt Romney or opposing President Obama — with nearly 80 percent of the spending occurring before mid-October.

The lack of support has led to many complaints from the Trump campaign about whether or not the party is truly supportive of their nominee. This has even led Trump to blast Speaker of the House Paul Ryan (R-WI) during recent stump speeches and campaign rallies.

“The Democrats have an unprecedented and lopsided advertising advantage in this race like we have never seen before, and it is having a serious and negative effect,” said Curt Anderson, a former RNC political director who is helping a pro-Trump super PAC, Rebuilding America Now. “It is possible that Trump has sealed his fate at this point, but it is still a terrible mistake not to have $50 million of advertising from the Republican Party exposing Hillary Clinton and keeping her numbers down,” said Anderson, who helped to lead the RNC’s independent expenditure effort in 2004 and 2008.

According to RNC Chief of Staff Katie Walsh, the party does not plan to spend any more money on this election cycle on TV ads or IEs. However she stated that the decision was completely unrelated to Trump.

Rather, she said, it stems from a strategic calculation made soon after the 2012 election that “that is not an efficient use of party committee dollars to spend money on television.” Pointing to a report that assessed the shortcomings of Republican efforts in the 2012 election, she said RNC leaders determined that the party’s money was better invested in data-driven voter contact operations.

“We put people on the ground for three years, invested in communities, doing data and voter registration, so that when we had a nominee, we would be able to link up with that nominee and work together to iinsure that the nominee had the best field program that the Republican nominee has ever had,” said Walsh.

Campaigns and super PACs are both better suited to funding ads, she argued.

“Why would we do an IE when we get a worse rate and worse placement than the campaign and the campaign has no idea what the messaging is going to be?” Walsh said.

In contrast, the Clinton campaign and political action committees supporting her have outspent Trump $189 million to $50 million as of last week, as reported by Advertising Analytics.

Trump and his Super PACs have had trouble fundraising since he has a very rocky relationship with the party elites, as well as the fact that he has a large faction of his own party, “Never Trump,” who have not supported his candidacy from its infancy. The division within his own ranks makes it increasingly difficult to spend on ads, as well as possibly causing severe problems as the campaign enters the home stretch to the general election on November 8.

Interestingly though, and as reported by Politico, a former RNC chief of staff, Mike Shields, who helped orchestrate the committee’s strategic shift away from television spending and toward ground operations, suggested Trump’s campaign and its supporters should have been aware of the shift, and responded accordingly.

“The RNC has been pretty clear for four years it wasn’t going to do TV. We actually created a four-year plan, and it has been executed wonderfully,” said Shields, who left the RNC last year to take the helm of a super PAC supporting the party’s House candidates.

“If the current nominee doesn’t have enough money for TV, that is his responsibility, not the RNC’s,” he said, adding “in the era of super PACs and billion-dollar presidential campaigns, it made sense for the RNC to own the ground game and data — and leave TV to others. The RNC has exceeded its goals, but it can’t control what presidential, House or Senate candidates put on TV.”

The issues with ad spending do ignore the fact that the Trump campaign and the RNC’s get-out-the-vote effort exceed the staff and assistance that what was received by 2012 GOP Presidential nominee Mitt Romney.

Brad Parscale, Trump’s digital director, said the campaign’s get-out-the-vote effort with the RNC is “outperforming 2012 numbers in nearly every battleground state.” And he praised the RNC for providing “vital ground-game infrastructure, data research and modeling, financial partnership and have staff integrated throughout our teams.”

Whatever the reason for the RNC’s lack of spending on the behalf of the Trump campaign truly is, Trump appears to need any leg up he can manage. The election is only 25 days out, and at this point, any positive media for Trump could help to stop the tailspin he appears to be in.