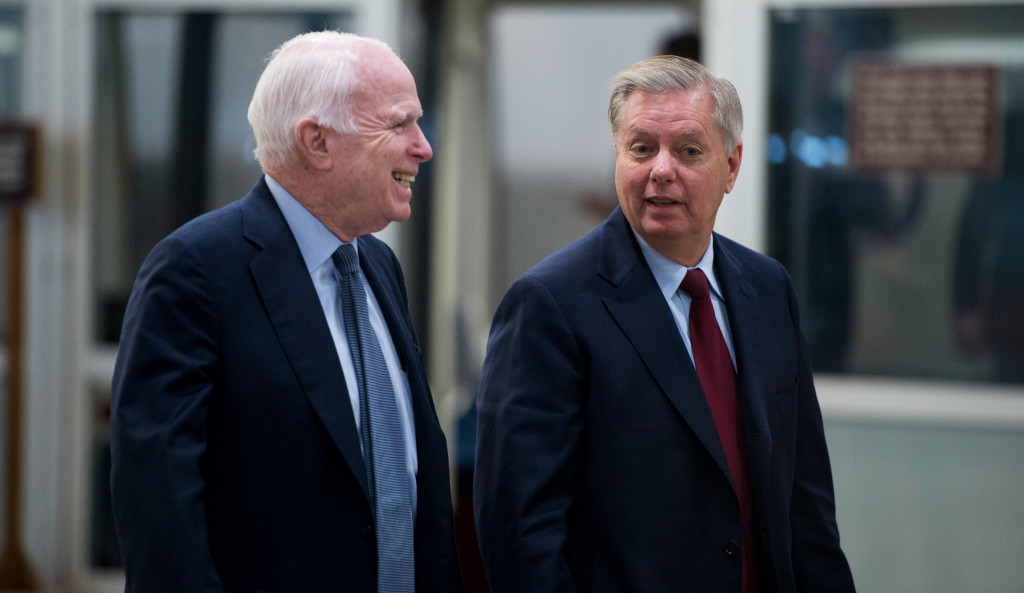 Republicans, not Democrats, are on the verge of being the party that is forever responsible for making Obamacare the law of the land.

A small coalition of Republicans in the Senate — Sens. Lindsey Graham of South Carolina, Bill Cassidy of Louisiana, Dean Heller of Nevada and Ron Johnson of Wisconsin — have put forth a plan known as the Graham-Cassidy bill to repeal major portions of Obamacare. The legislation is on its way to the Congressional Budget Office (CBO) for scoring and is expected to go up for debate on the Senate floor next week.

The bill faces a significant obstacle, one that proved insurmountable for Republican leadership when the party tried three times to repeal and replace, and even repeal, former President Barack Obama’s hallmark health care bill in late July. The three Republican senators that struck down the party’s seven-month push to repeal and replace Obamacare are threatening once again to thwart their colleagues’ efforts to make good on a seven-year Republican campaign promise.

Sens. John McCain of Arizona, Lisa Murkowski of Alaska and Susan Collins of Maine are all signaling that they might vote against the Graham-Cassidy amendment. These senators were the only Republican defectors in the contentious 49-51 vote on the “Skinny Repeal” bill.

Collins is more than likely going to vote against the latest repeal effort, given her comments to reporters Monday afternoon. Collins cited “more than $1 billion” worth of cuts to her home state’s hospital association and said she has “a number of concerns” with the bill in its current form.

Murkowski and McCain have both said they are still considering whether or not they would support the bill if it came up for a vote, and each senator has their own reasons for their uncertainty.

McCain said Monday he wants Graham-Cassidy to go through regular order, which requires Republican leadership to whip 60 yes votes for the measure to pass and allows Democrats the opportunity to filibuster.

Murkowski told reporters Monday that she is still undecided on Graham-Cassidy, but she is reportedly close to a yes vote. The senator notably withheld her support for all three Republican proposals to reform the U.S. health care system in late July, and she has not yet shown she is willing to give a thumbs up to this bill.

Both senators have also shown their support for a bill being crafted from a bipartisan group of senators who sit on the Senate’s health committee. The bill seeks to shore up the Obamacare marketplaces and prop up the individual health insurance marketplace.

Senate Health Committee Chairman Lamar Alexander has laid out a potential compromise for his colleagues across the aisle: Republicans will put forth a bill to continue paying insurance companies Obamacare subsidy payments – cost-sharing reductions (CSRs) — that help cover the cost of deductibles for low-income consumers on the exchanges. In return, he asked that Democrats allow for the expansion of state waivers — commonly known as 1332 waivers — that allow states to innovate their implementation of Obamacare as long as they meet the basic ACA protections.

hearing process. McCain isn’t willing to support a bill that gets pushed through Congress without hearings and debate.

McCain’s and Murkowski’s states stand to lose funding under the Graham-Cassidy bill, and other than toeing the party line, they don’t stand to gain much from supporting the measure.

Republicans can only stand to lose two members of their own party in the Senate. If three GOP senators vote against the bill, it is dead.

The majority of Republican voters surveyed in a recent Harvard University poll said that repealing and replacing Obamacare was an “extremely important priority” for them. It remains to be seen whether or not Republican senators will rally around a bill to overhaul Obamacare.

Privacy in the Fearsome Power of the Internet Age