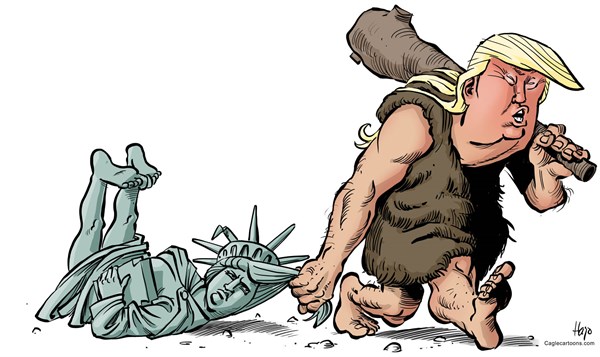 Brown, an outspoken Trump critic, issued an usually harsh derision of Trump supporters after dismissing the president’s rhetoric on climate change science and U.S. policy toward North Korea as “stupid and dangerous and silly.”

“They’re both kind of very similar,” Brown said. “You should check out the derivation of ‘Trump-ite’ and ‘troglodyte,’ because they both refer to people who dwell in deep, dark caves.”

Brown attended the climate event, which coincided with the U.N. meeting in New York, to continue his advocacy for a state based commitment to the Paris Climate Accords. The Trump administration announced the U.S. would be reneging on earlier commitments to participate in the international climate change framework in May.

Trump’s position on the Paris agreements was obscured Saturday after the Wall Street Journal reported the administration was considering continued participation in the deal. The White House denied that its position on the agreement had changed in a statement issued Saturday.

Brown explained that Trump’s election has facilitated the passage of climate related policies because he represents the rise of an opposition that is “not believable, is not credible.”

“President Trump is the null hypothesis, which he’s proven,” Brown said. “Everything he’s doing is … stupid and dangerous and silly. I mean, come on, really, calling the North Korean dictator ‘Rocket Man?’ … He is accelerating the reversal through his own absurdity.”

How Republicans Could End Up Being The Party That Solidifies Obamacare