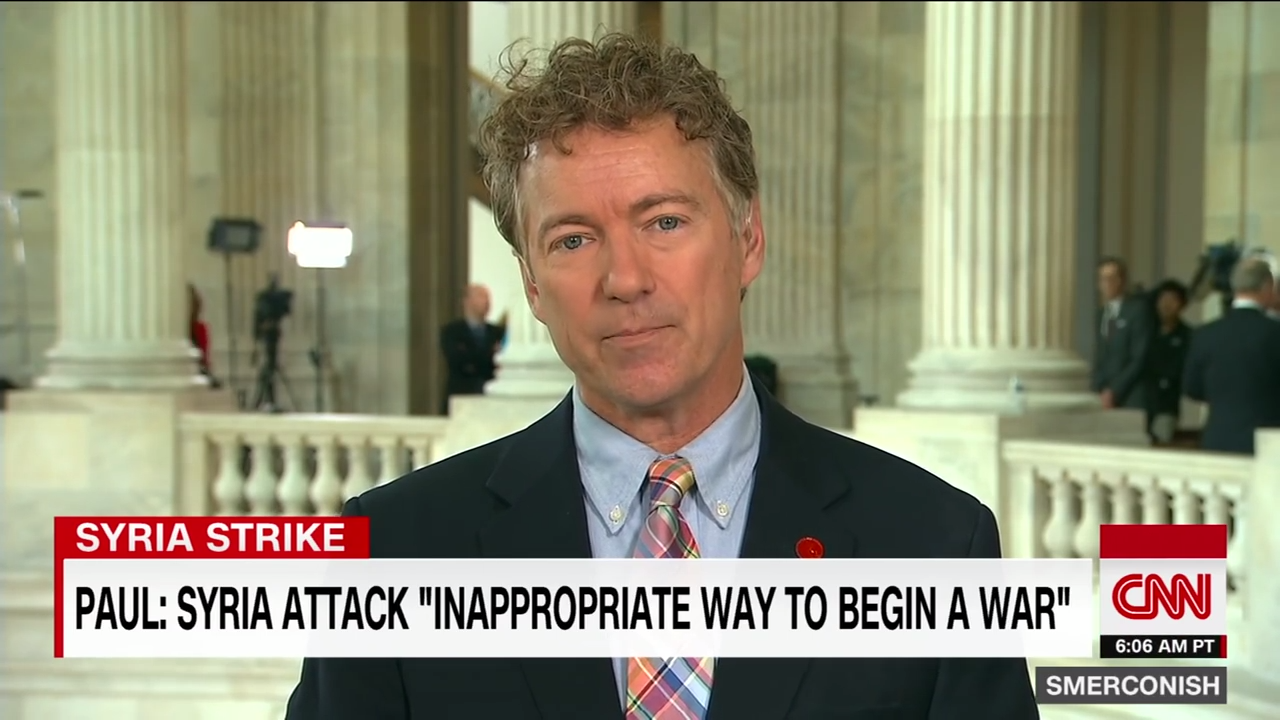 Recently, Senators John McCain and Lindsey Graham predictably but mistakenly called for greater United States military involvement in the Syrian civil war, proving they have learned nothing from our history in the Middle East.

It seems that every dictator and every atrocity in that region is met with a call for action without a thought to consequences. Those who wish to send our soldiers to “take care” of every atrocity in the world might want to take a glance at Maplecroft’s Human Rights Risk Atlas, which currently lists 35 countries as extreme risks for committing atrocities. Are we prepared to send our military to right the wrongs of all 35 countries?

Of course, Americans were horrified by the use of chemical weapons in Syria on innocent people. But there are horrors all around the world, and surely the suggestion is not that we battle them all.
United States military action is not to be taken lightly. It should be thoughtful, measured, constitutional — and decisive for a victory. For over two decades, we have acted as a traffic cop in the Middle East — sanctions, bombings, no-fly zones, invasions, occupations, policing, nation-building.
American foreign policy now requires a dramatic shift. It must be governed by the question: What are our vital national security interests in the region?
American foreign policy now requires a dramatic shift. It must be governed by the question: What are our vital national security interests in the region?
President Trump was elected in no small measure because he castigated the previous administration for the disastrous and destabilizing Iraq War. He lampooned the Obama/Clinton decision to bomb Libya and send it into chaos. And Trump warned, rightfully, that Syria was a quagmire, ripe with opportunities for mistakes and catastrophic consequences to world peace.
For years, I have argued against intervention in the Syrian civil war, and I have done so under both Democrat and Republican presidents.
It isn’t that there aren’t atrocities. There are — and on both sides of the war. But sometimes discerning the good guys from the bad is not possible. Sometimes, there is no good side in war.
Assad, like so many strong hands in the Middle East, is an autocrat and likely much worse. But some of the armies that fight him and seek his ouster are radical Islamic rebels allied with the worst elements on Earth — al Nusra, al Qaeda and, yes, ISIS.
Furthermore, America has no national security interest in this war. It isn’t clear that the Islamic rebels who would replace Assad would be friends of America. However, it is clear that the 2 million Christians in Syria who are protected by Assad fear his ouster.
So why do my colleagues persist in their quest for more war and intervention? I don’t know, but one quote from Senator McCain’s website offers some clarity: “Our strategy cannot presume to separate the fight against [ISIS] from the Syrian people’s fight against the Assad regime. They are inextricably connected.”
It is true that the fight against ISIS and the civil war in Syria are connected, but not in the way neocons infer. Overthrowing Assad may actually lead to an Islamist regime that finds common ground with ISIS, not America.
The neocons’ worldview is warped and naïve. Neocons see military action as the first option, and they never look back to view the mayhem that follows.
In short, they either ignore or do not understand the unintended consequences of our military involvement in the Middle East.
Not only did neocons fail to anticipate that the Iraq War would embolden Iran, but they predicted the opposite — that a yearning for democracy would transform the Middle East into a replica of the West.
They also insisted that the US, along with Qatar and Saudi Arabia, arm the Islamic rebels in Syria. While the arms were not decisive, they were just enough to keep the civil war alive — just enough to push Assad back and create the vacuum in which ISIS grew and thrived.
In Libya, these same neocons argued one year to arm Gadhafi and argued the next year to depose him. I warned that deposing Gadhafi would lead to chaos, and it did. With the iron fist of Gadhafi gone, militant Islamic groups festered and grew, including ISIS. America is at greater risk of Libyan terrorism today than it was before the overthrow of Gadhafi.
The neocons were wrong about the war in Libya. They were wrong about the war in Iraq. And they are wrong about getting us further mired in the civil war in Syria. They’ve been wrong about every major intervention of the past two decades in the Middle East. Maybe it is time to quit listening to them.
Recently, I introduced legislation to ensure that no American weapons are given to terrorist groups, especially in Syria. You wouldn’t think we would have to have legislation to prevent our own government from sending arms to terrorists, but there it is.
In fact, the Syrian civil war involves dozens of “rebel” groups fighting Assad and literally hundreds of splinter militias. One observer reported as many as 1,500 different groups fighting Assad.
McCain and Graham still argue we must depose Assad because Iran is on his side. Well, ISIS is on the other side. Which is worse? I don’t know for sure, but I know neither are our friends, and neither should be treated as such.
McCain and Graham also argue that we must fight in Yemen because Iran supports the Houthi rebels. Yet one major group also fighting the Houthis is al Qaeda in the Arabian Peninsula. Is it possible that our involvement in Yemen could also lead to such chaos that al Qaeda picks up the pieces and exploits the vacuum much as ISIS did in Syria?
Any military action against Syria or Yemen must come with the consent of Congress. There are two reasons for this. The first and most obvious is that it is what our Constitution says, and we should follow it. But the second is because we need thoughtful debate. We need to examine consequences. We need to look at enemies and allies, actions and reactions.
Is military action in our vital interest? What goal do we have? Can it be achieved? What are the costs and consequences?
President Trump ran on an America First platform, advocating for less intervention in global affairs, and I support him on that. I hope he keeps to it, and I urge my colleagues in Congress to do their job and hold him to it.

Rand Paul is the junior US senator from Kentucky. He serves on the Foreign Relations Committee and the Homeland Security and Governmental Affairs Committee.

Sen. Paul’s Op/Ed originally appeared on CNN and is being republished by The Libertarian Republic with expressed permission.

The views expressed are those of the author, they are not necessarily representative of The Libertarian Republic or its sponsors.

Obamacare Repeal Vote Could Happen As Soon As Next Week