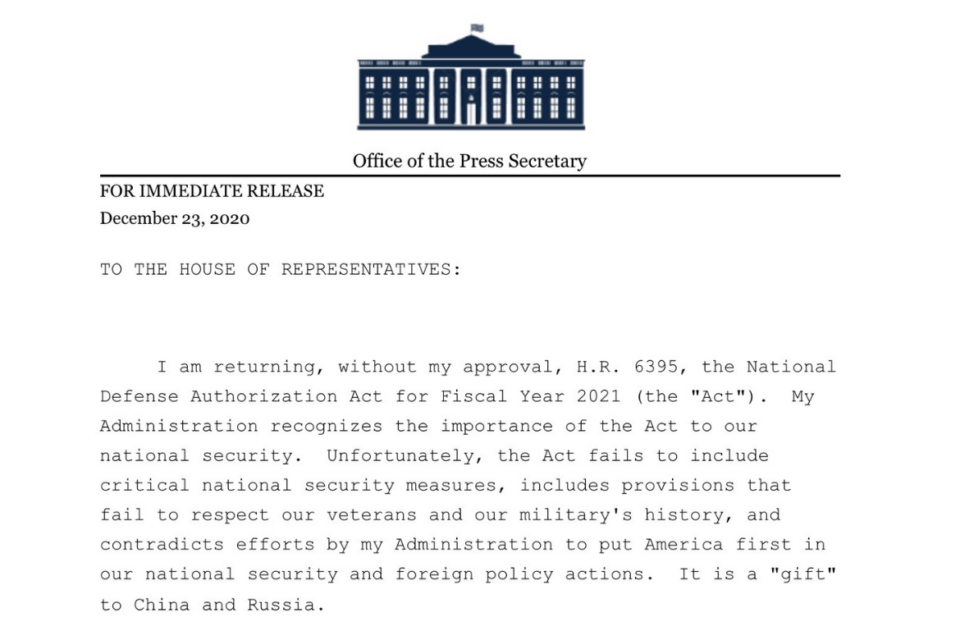 Pro-war groups, eat your heart out.

President Donald Trump just vetoed a massive defense bill in one of the best moments of his presidency. Of course, failure to meet his demand to abolish Section 230 is part of his reasoning, but a policy win is a policy win. Trump also cited opposition to renaming military bases named after confederate leaders and congress blocking troop withdrawals as reasons for rejecting the National Defense Authorization Act.

You may ask yourself—why is renaming military bases a top issue with the NDAA? The answer is pandering and pork barrel politics, which seems to be what will drive a potential veto override. So many of our politicians prioritize getting pork back to their district that they lose the principles they once subscribed to, such as serving their country and defending the Constitution.

When was the last time a politician gave their district a briefing on foreign events, interests, or consequences? Certainly that number must be in the single digits and approaching zero. Just because the populace has been told to avoid dealing with foreign politics does not mean it should be relegated to the bureaucracy or to special interests.

This bill is a product of the interventionist and corrupt norms of Washington. This malfeasance follows in every bill passed by Congress. What is worse is that these bills are basically a crapshoot for what actual policies are proposed in them. Even Representative Alexandria Ocasio-Cortez (D., New York) has made it clear that most members of congress do not get to read these large bills cover to cover, particularly with the latest COVID-19 relief bill.

This veto is not just a solid policy decision, but it is the morally sound choice to prevent this bill from passing. All too often does Congress follow the advice of Speaker Nancy Pelosi to, “pass the bill so you can find out what is in it”. This leads to more and more bureaucracy. Take Charles C.W. Cooke’s Affordable Care Act synopsis for example. To paraphrase, the ACA comes down to several clauses that say simply “the secretary shall…”.

This is how policy is made and enacted. In his book A Republic If You Can Keep It, Justice Neil Gorsuch rails against this sort of policy making because of its inconsistency and bulk. The rules end up making no sense or end up disadvantaging everyone who has to adjust their actions on a dime to stay within the law.

This sort of arbitrary use of authority is never about doing what needs to be done. It is always about power. So regardless of what happens to the bill moving forward, this veto should mean that there are people who wish to take a stand. There is support for this opposition. Lawmakers need to take notice and do the right thing.

It is time to seize this opportunity. As time has gone on, the people are getting more and more sick of the hawkish establishment and corrupt bureaucracy. This is a major opportunity for the message of liberty to be spread. 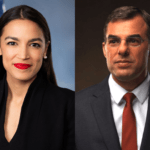 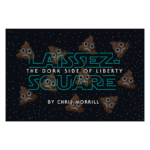