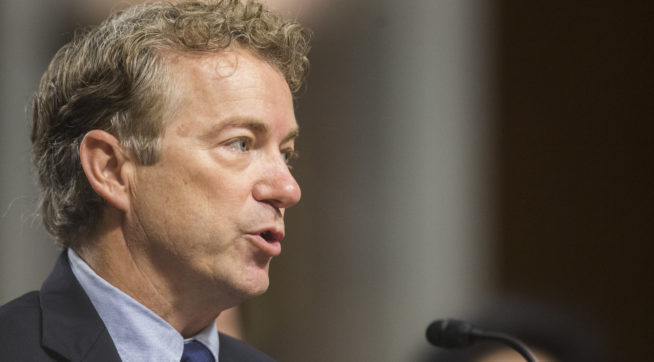 Sixteen years ago, 3,000 Americans lost their lives in one of the most devastating terrorist attacks in recent history. It sparked the current wave of military interventions; the war in Afghanistan, the war in Iraq, and by extension, the wars in Libya, Yemen, and Syria.

The United States has been operating under the legal guise of the 2001 AUMF (Authorization of Military Force) which was passed by Congress in order to go after the Taliban and Al-Qaeda in Afghanistan. Even staunch anti-war Ron Paul voted for it, while the only vote against it was Representative Barbara Lee, who warned about the implications of endless war.

And we are seeing this implication. For sixteen years the United States has waged wars across the world under the legal pretenses of the 2001 AUMF. Bombs dropped in Syria are justified under an AUMF that was used to go after Al-Qaeda. We’re still bombing Al-Qaeda, but we’re also bombing ISIS. And other terrorist groups that aren’t listed in the AUMF.

Rand Paul, the libertarian-leaning Republican, wanted Congress to assert its war-making powers that it has abdicated since 2002. Paul pointed out that the Founding Fathers wanted to make war difficult because war is one of the most destructive forces the world has ever seen. He decided to force a vote on the matter; should Congress take back its war-making powers or not?

Congress decided against it, voting to table his amendment to end the 2001 AUMF. Even those who are suspicious of the President’s executive powers voted for tabling his amendment, such as Senator Jeff Flake (R-AZ).  Thirty-three Democrats joined Paul while only two other Republicans -Mike Lee (R-UT) and Dean Heller (R-NV)- voted nay to stop the tabling.

Vaunted self-described ‘one of the most libertarian members of the Senate‘ Ted Cruz voted for tabling the amendment.

The Trump administration has not pushed for a new AUMF, arguing that it has all the authorization it needs from the 2001 AUMF. But even Secretary of Defense Jim Mattis has urged Congress to debate a new authorization of military force against ISIS back in March.

“I think it’d be a statement of the American people’s resolve if you did so. I thought the same thing for the last several years, I might add, and have not understood why the Congress hasn’t come forward with this, at least the debate,” he said.

This is why Paul remains one of the most principled men left in Congress. He has not wavered in his quest for reigning in military interventions; his vocal opposition to arming Saudi Arabia, forcing a vote on ending the legal authorization for the endless wars that the United States has managed to bungle into for the past sixteen years, continuing to stand up for the Bill of Rights etc.

It’s weird that we have to look long and hard for principled men in Congress. Congress should be filled with men and women who want to do what is right, what is moral, and what is just. Is it just to support regimes who kill thousands of innocents? Is it right to allow the President to wage endless war across the world, under the guise of a war on terror? Is it moral to lapse in their responsibility as our legislative body to decide when to go to war?

According to 60 members of Congress, it is moral to support regimes who kill thousands. It is right to allow the President to wage war whenever and wherever he wants under the thinnest of legal pretenses. It is moral to wash their hands of responsibility when it comes to war and the terrible consequences that follow.

Paul demanded that they remember what is moral, what is right, and what is just. Sadly, only a few members agreed. Paul will remain a lonely voice of principle in Congress, forever condemned to see generation after generation head off to war.

Hillary Promises Not To Leave Politics