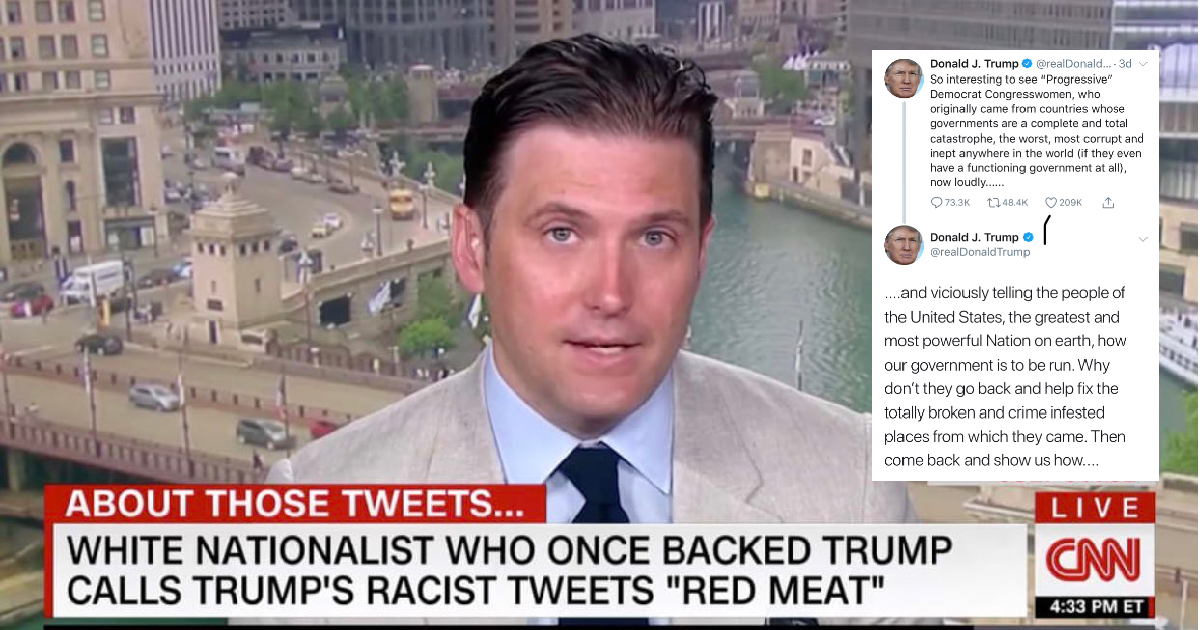 Yesterday’s twitter fight between Trump and Alexandria Ocasio-Cortez almost made people forget about his longest-running fight yet – his fight with CNN.

But CNN hasn’t forgotten their grudge, and they are willing to sink to impressive lows to critique President Trump.

Trump repeatedly refuses to answer questions from CNN reporters. Likewise, CNN’s coverage of the president has been almost uniformly negative. It is a regular occurrence for CNN guests and commentators to label the President as a racist. CNN sometimes spends over 90% of their airtime criticizing Trump, according to a 2017 study by the Media Research Center. However, never before has CNN platformed a self-described white supremacist.

This series of tweets is the latest presidential faux-pas to draw accusations of racism and the rather tone-deaf segment on CNN featuring well-known white supremacist Richard Spencer.

So interesting to see “Progressive” Democrat Congresswomen, who originally came from countries whose governments are a complete and total catastrophe, the worst, most corrupt and inept anywhere in the world (if they even have a functioning government at all), now loudly……

….and viciously telling the people of the United States, the greatest and most powerful Nation on earth, how our government is to be run. Why don’t they go back and help fix the totally broken and crime infested places from which they came. Then come back and show us how….

While covering the spicy tweets, CNN decided to bring on an expert on racism. Unironically, CNN allowed Richard Spencer to be interviewed on live television in an attempt to malign the President with white nationalism.

Predictably, Spencer, a racist, had some very racist things to say.

On the segment, he said that Trump “gives [white supremacists] nothing outside of racist tweets. And by racist tweets, I mean tweets that are meaningless and cheap and express the kind of sentiments you might hear from your drunk uncle while he’s watching Hannity.”

After being roundly criticized by Salon, The Daily Beast, and even Fox News, Jake Tapper finally released a brief and benign statement on Twitter regarding the incident.

Richard Spencer is infamous for being one of Unite the Right’s most extreme speakers. You might remember Unite the Right as the rally in which a young woman was viciously murdered by a white supremacist. Spencer has also advocated repeatedly for “peaceful ethnic cleansing.”

No, we don’t know what that means either.

Either way, CNN should have known better. It was objectively poor journalism and Tapper is wrong to defend it.

Fighting fire with fire might work, but it probably doesn’t work the same way with racism.

Cardi B Changes Her Mind On Taxes, Now Supports Raising Them

Leveraged Lending in the US and its Impact on the Economy