The mainstream media have been giving Gary Johnson a hard time. First they asked him what he thought the United States should do about Aleppo, and he was caught off-guard, because it had never occurred to him that he was being asked what our government should do about a foreign city entirely outside our jurisdiction. Libertarians just don’t think of things like that, so he assumed it must be an acronym describing some obscure part of the federal government.

More recently Johnson was asked which foreign leader or head of state he admired most, and when he was not able to think of one single statist in the entire world that he admired, whether it be a communist dictator, the scion of a ruling family in a Middle Eastern country, a fascist warmonger, a European socialist or just a king of some small African nation, this was seen as a very big flaw in the Libertarian candidate for president. Surely he must admire some statesman or public official wielding immense power against the people in another country! How could he expect to be President of the the United States if he didn’t?

Johnson is modest and humble, and he refers to those times when he can’t think of answers to such questions as his “Aleppo moments.” But given the complete mismatch between the Libertarian outlook and that of the media, we think that Gary Johnson could probably get much  better with practice.

Here are five other questions we think Gary Johnson should prepared to answer, given the media’s track record.

1. Who is your favorite Nazi? 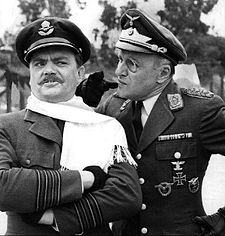 Now everybody uses the term “Nazi” as a pejorative to label people that they don’t like, whether they bear any resemblance to actual Nazis or not. But truly enlightened people never use the word “Nazi” in name calling, because they realize the Nazis were just a political party like any other, and they were merely national socialists. The true measure of a political candidate’s enlightenment would be his ability to see past the label and find at least one historical Nazi that he can identify with, whether it be Hitler, Goebbels, Goering, Eva Braun, a photographer like Leni Riefenstahl or some obscure architect like Albert Speer.

Who is your favorite Nazi and why, Mr. Johnson? What do you mean you cannot think of one off the top of your head? Are you having an Aleppo moment again? You have heard of the Nazis, right?  Haven’t you ever read Mein Kampf? No. Well, shame on you. Have you read The Rise and Fall of the Third Reich? No? How about watching a WWII movie? Or at least a Hogan’s Heroes episode? You can’t expect to become President of the United States and not have enough knowledge about Nazis to name your favorite one. Come on!

ISIS Has A New Coloring Book For Kids, Featuring Suicide Vest and AK-47