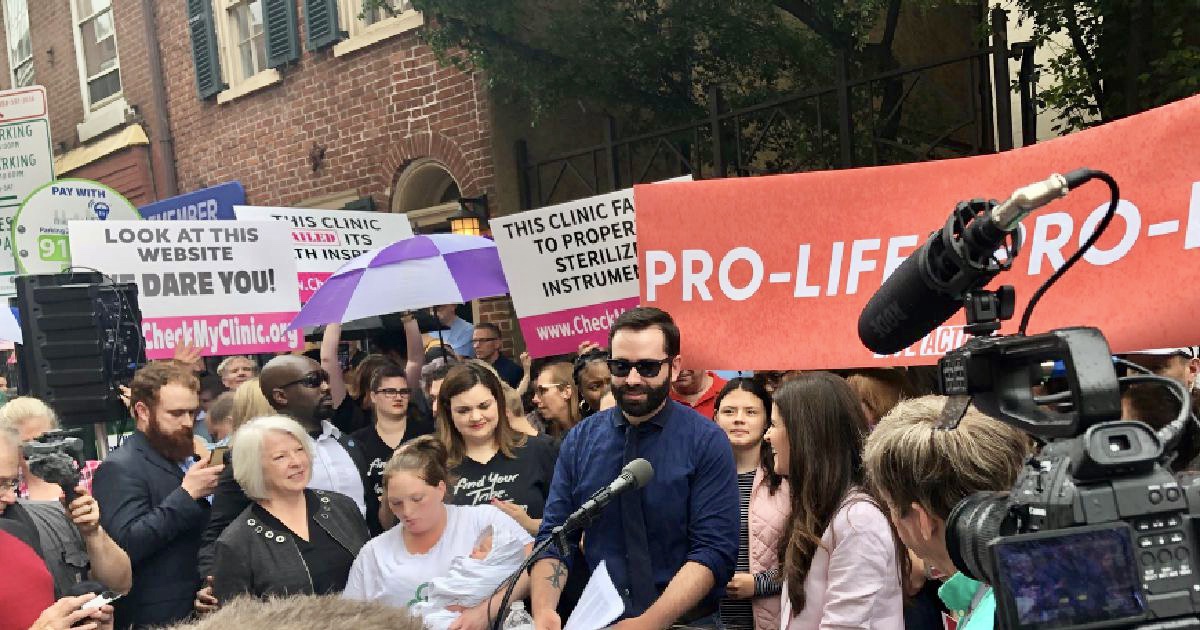 1,000 Pro-lifers rallied in Philly on Friday in response to Pennsylvania’s Representative Brian Sims doxing an elderly lady handing out pro-life literature, and a group of young girls who stood outside of the local Planned Parenthood facility to pray for both the mothers and their unborn children.

Who does this jackass think he is putting a doxing bounty out on anybody let alone three TEENAGE GIRLS PRAYING#WakeUpAmerica this clown Brian Simms is a LAWMAKER. He should be EXECUTED for endangering the lives of anyone and these are CHILDREN.

???? RETWEET IF YOU AGREE pic.twitter.com/sSI4CeGIRx

The videos which went viral last week spawned an incredible response by pro-life people all around the country after Sims was asked to apologize for his actions, but instead doubled down defending his harassment of the pro-life women.

I will fiercely protect a woman’s right to make the best choices for her health & her body, unimpeded. I also know that two wrongs don’t make a right, especially on the front lines of a civil rights battle. I can do better, and I will do better, for the women of Pennsylvania. pic.twitter.com/jURL1UX9qE

Myself, @MattWalshBlog @AbbyJohnson @LiveAction @LilaGraceRose @michaeljknowles @realDailyWire heard you and ALL THESE AMERICA DOES NOT AGREE!!!

We will NOT be silent and we WILL fight for the unborn!

Accroding to you we are “Bible Bullies” but we are simply Americans that LOVE OUR CHILDREN!!#ProLifePhilly pic.twitter.com/AMzypqYmqm

Just rolled up to 1144 Locust and there’s a few other pro-life folks here. pic.twitter.com/B5pzGBaMNq

Did you just assume my gender? https://t.co/qSWYLMyVec

Matt Walsh went so far as to thank Rep. Brian Sims on Twitter, saying it “wouldn’t be possible without him.”

HUGE thanks to @BrianSimsPA for making this happen. We couldn't have done it without him.

The rally, which drew over 1,000 in attendance, pleasantly surprised many including Walsh himself who tweeted about Friday’s crowd, “CBS reporting over 1,000 people attended the rally. Way more than I expected, honestly. I would have been happy with 100. This is remarkable.”

CBS reporting over 1,000 people attended the rally. Way more than I expected, honestly. I would have been happy with 100. This is remarkable. pic.twitter.com/VqOeRheLef

Today, the City of Brotherly Love got a dose of love and kindness from some incredible people who chose to take the higher road when advocating for that in which they so strongly believe.