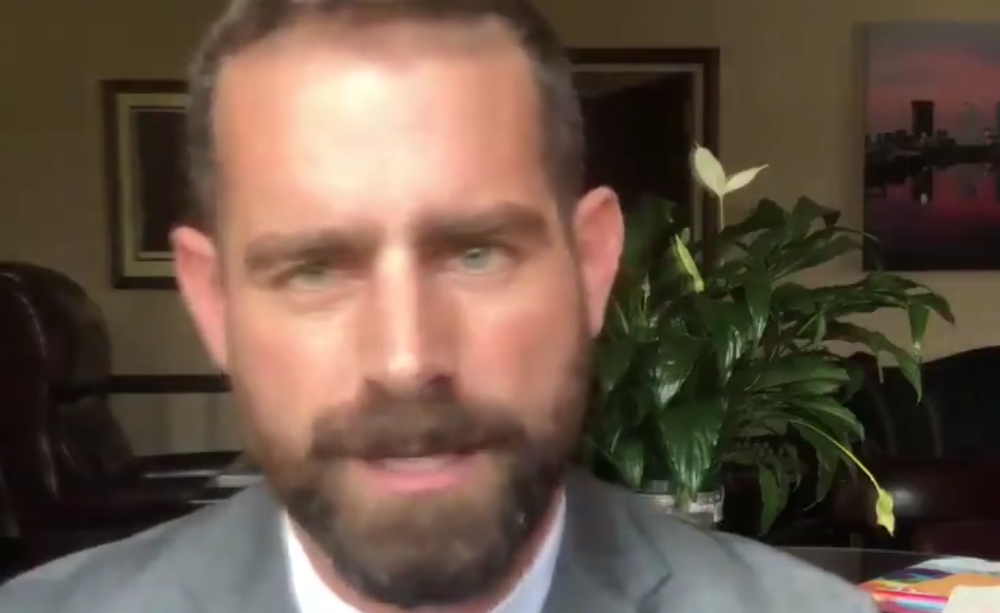 Representative Brian Sims (PA-D) took to Twitter to offer an “apology” for his recent behavior outside of a Planned Parenthood clinic in Pennsylvania.

During his unhinged escapade, he harassed an elderly woman for eight minutes and offered $100 bounties to dox three minor girls. So much for standing up for women, eh?

Here is the video of him harassing the elderly woman who was quietly handing out pamphlets:

WATCH: Pennsylvania State Representative @BrianSimsPA harasses an elderly woman who is peacefully advocating for the lives of preborn human beings and women who are considering abortion.

Here is the video of him offering money to dox minors:

UPDATE: Watch PA Rep @BrianSimsPA offer up $100 for the identities & addresses of 3 TEENAGERS who are fighting for the lives of preborn children.

Steven Crowder mused that it was odd that Twitter would ban a clearly marked AOC parody account because their dumb tweets were too similar to AOC’s dumb tweets (policy against misleading, or something) while letting this sort of behavior stand.

If you're on the right, a parody account gets you banned.

If you're on the left, you can target minors, offer money for their doxxing…. and nothing?

On Tuesday, he released a video on Twitter committing to “do better.” The “apology” consisted of more ranting with the pledge to “do better” being a footnote at the end, all while not acknowledging his actions.

I will fiercely protect a woman’s right to make the best choices for her health & her body, unimpeded. I also know that two wrongs don’t make a right, especially on the front lines of a civil rights battle. I can do better, and I will do better, for the women of Pennsylvania. pic.twitter.com/jURL1UX9qE

It’s once again, another example of Leftist Gatekeeping, pretending to be a champion of women, but terms and conditions apply. Those T&C’s? Only if you’re a Leftist.

Check out some of the top replies below, most of which received far more Twitter favorites than his video.

How do u go about deciding which women deserve ur manly heroism?

Isn’t it sexist 2 assume women need ur patriarchal help? Aren’t u using ur white male privilege 2 suppress women outside PP from having a voice?

You did not apologize to the teens & elderly woman for harassing + attempting to dox them.
The lack of self awareness from an elected official about the harm of your behavior is toxic to a healthy democracy. Public servants have resigned for less. @BrianSimsPA

Looks like saying “I’m sorry” was as difficult as you saying “pap smear.” The only harassment you have video evidence of is YOU attempting to dox underage girls and of YOU bullying a lady who was silently praying. They deserve a real apology from you. Come give it to them on Fri.

”Two wrongs” would imply that innocent people peacefully praying outside a building are on par with your atrocious, vile behavior. If this is supposed to be an apology, you better try again boy.

I like the way throws “racist” in there without acknowledging the fact that 53% of blacks people are never born because of Klanned Parenthood. Black people are on track to the the smallest minority in America. This was the vision of the founder of PP who was a racist eugenicist

I'm gay & you are an embarrassment to the gay community.

The way you bullied & physically intimidated the pro-life woman was deplorable.

I will be donating to your Republican challenger.

You have the nerve to describe pro-life people as racists?
But in reality YOU & the entire abortion cult are the real racists.

In 2017 42.8% of babies aborted in your state were black babies but black population in Pennsylvania is only 10.6% of general population.#BlackGenocide

I will join my fellow Philadelphians at the 11am Friday morning protest to demand you resignation from Pa State House seat asap. You are a proven hate monger and too unstable to hold any elected office. Perhaps you could volunteer full time and dispose of the dead babies instead