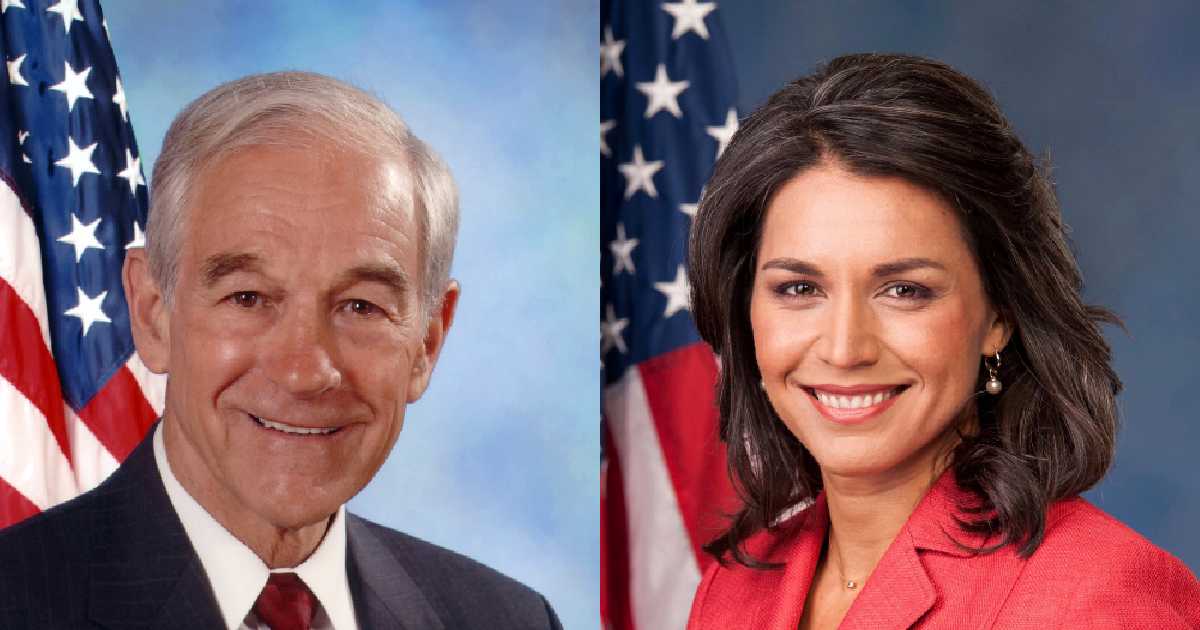 Former Congressman and two time presidential candidate Ron Paul had some very nice things to say about Rep. Tulsi Gabbard (D-HI) on foreign policy when he was asked whom he favored on the Democratic side in the 2020 race for the White House in an interview last week on the state-funded Russian media network “Russia Today.”

“Tulsi Gabbard by far is the very, very best,” the former Texas congressman and frontrunner of the modern libertarian movement. “She is very liberal when it comes to economics. We probably wouldn’t agree with too much on economics.”

The former Congressmen has long been an outspoken critic of America’s intervention into the affairs of other nations.

While Paul didn’t officially endorse Gabbard, he did say that she was the best of all the candidates currently running in the extremely crowded field of over 20 people.

“She is good on foreign policy,” Paul said. “She does not want these engagements, which is an economic issue. We’d save a lot of money by not being engaged like this,” said Paul.
“She’s the most intelligent and would be the best,” Paul added. “If we had to pick one of them to be our president, I think she would be giving us the best chance as for bringing about peace.”

Rep. Gabbard’s criticism of America’s regime change wars has been a primary talking point in her presidential run. Gabbard, who is a veteran of both Kuwait and Iraq, has earned the respect of many Libertarians with her sharp criticism of the warmongers in both parties whom she says “never tire of war” in spite of their vast differences on economic policy.

18 years, thousands of dead, trillions of dollars. We’re right back where we started. Our leaders have failed us. It’s time our troops in Afghanistan came home. pic.twitter.com/Csz1YtFCIy

We need to take the trillions being spent on regime change wars, the new Cold War & arms race, & reinvest those dollars in the needs of our communities–quality healthcare for all, protecting the environment, improving education, rebuilding our crumbling infrastructure, & more. pic.twitter.com/nziORqkosO

The new Cold War is getting hotter. We need leaders with foresight to see how in Venezuela, Syria & other places, potential military conflict btwn US-Russia can quickly escalate into war—nuclear war, the greatest danger we face today. https://t.co/uwjmzilMig

Gabbard’s voice is considered by many to be a welcome addition to the national discussion as many Americans tire of never-ending wars, and is certainly a change of pace as many in both major parties continue to allow never ending wars.

Why We Need Hayek Today