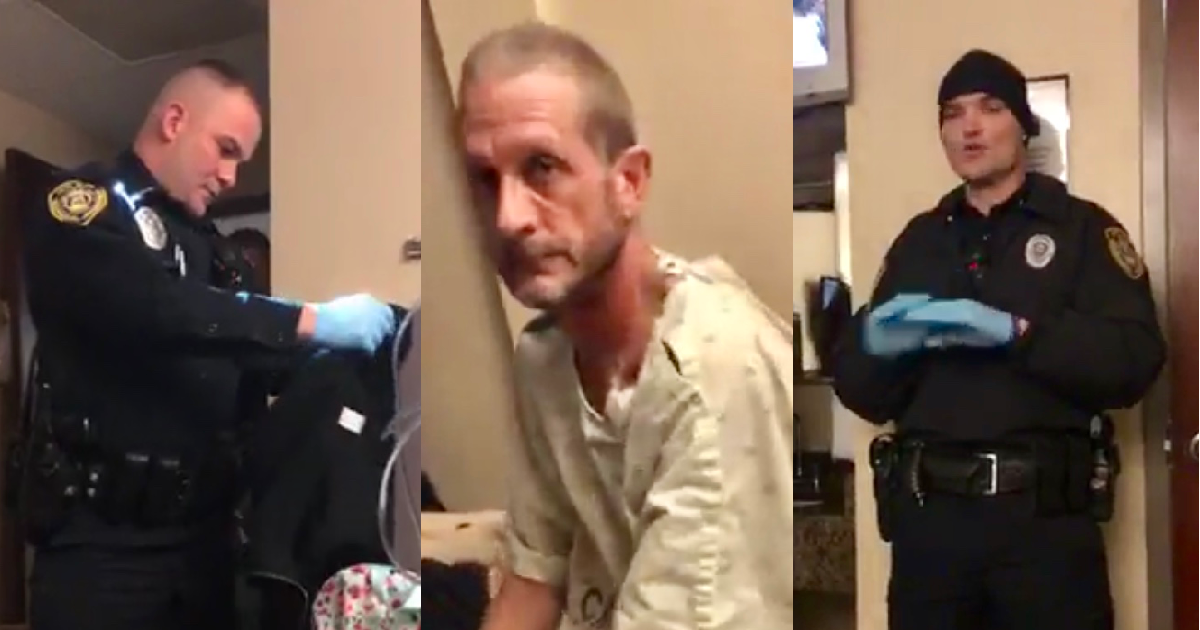 Police in Bolivar, Missouri searched the hospital room of Nolan Sousley on Wednesday night after getting a call that someone smelled marijuana in his hospital room. Police were unable to find any marijuana, and now both the city of Bolivar and the Bolivar Police Department are investigating the issue.

Nolan is suffering from stage four pancreatic cancer, and says he doesn’t smoke marijuana but uses CBD oil as a treatment for his cancer. He said he was trying to get some sleep Wednesday night when the security guard at Citizens Memorial Hospital in Bolivar accused him of smoking marijuana.

“He said I smelled marijuana coming from your room. I was like; it’s not me. I didn’t have any marijuana, so leave me alone because I’m trying to sleep,” Sousley said.

In the video, which was streamed on Facebook Live Wednesday night, you can see police come into Sousley’s room uninvited and begin going through all of his personal belongings. Sousley tells officers several times that he doesn’t have any marijuana, and only has CBD capsules of which he said he made the staff of the hospital aware. During the whole encounter, you can hear the distress in Nolan’s voice as police go through his things without his consent.

Missourians voted to make medical marijuana legal in Missouri, but the change hasn’t happened yet.

Ultimately officers did find CBD oil, which is legal in the state of Missouri.

Nolan’s wife, Amber Kidwell, says she is glad the state voted to legalize medical marijuana, and says she hopes it help other people the way CBD oil has helped her husband.

Nolan said he would like to see the security guard lose his job, and hopes the viral video of the confrontation with police will ultimately have a positive outcome.

“People you don’t know are saying don’t give up. Keep fighting, and it makes you want to fight more, and then you have people telling their story,” Sousley said. “To me, that’s even bigger. You’re reading stories of people saying we’re fighting the same fight.”

Citizens Memorial said in a statement that it is policy to call law enforcement if drug abuse is suspected, but didn’t indicate administrators wanted Sousley’s bags searched. The Bolivar Police Department hasn’t commented on their actions, but said they’ve received threats since the video went live.

You can watch Nolan’s entire encounter with police as well as a follow-up video the next day explaining the details of the incident below.

Prospects of Oldham Athletic at the end of season