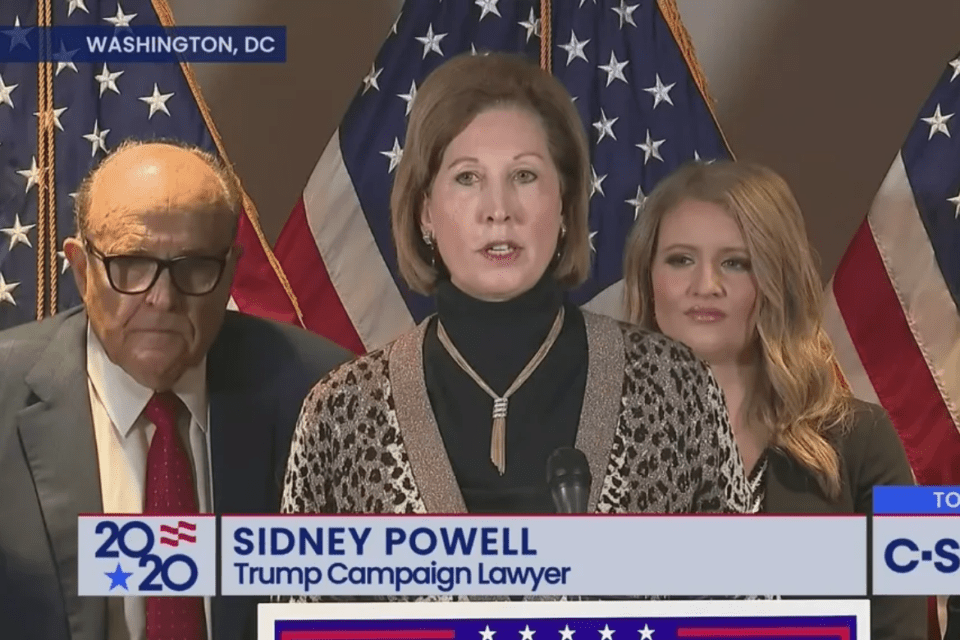 The legal team for President Donald Trump distanced itself from Sidney Powell Sunday evening, announcing that she has no official role with the campaign or the president himself.

The announcement came from former New York City Mayor Rudy Giuliani and Jenna Ellis, both of whom have represented the Trump campaign in its lawsuits attempting to overturn election results in several swing states.

“Sidney Powell is practicing law on her own. She is not a member of the Trump Legal Team. She is also not a lawyer for the president in his personal capacity,” the statement from Giuliani said.

The announcement from Trump’s legal team comes after Powell appeared with Giuliani and Ellis at several press conferences and in court. She had also appeared on television multiple times in recent days to echo the president’s claims of massive voter fraud, though she, along with the rest of Trump’s legal team, has declined to provide any evidence of such.

Trump himself also said that Powell was a part of his legal team in a Nov. 14 tweet.

I look forward to Mayor Giuliani spearheading the legal effort to defend OUR RIGHT to FREE and FAIR ELECTIONS! Rudy Giuliani, Joseph diGenova, Victoria Toensing, Sidney Powell, and Jenna Ellis, a truly great team, added to our other wonderful lawyers and representatives!

Though Powell appeared on cable news almost daily, she has faced widespread criticism over her allegations. She has alleged that electronic voting systems switched millions of votes to President-elect Joe Biden, a claim which drew criticism from Fox News’ Tucker Carlson.

“She never sent us any evidence, despite a lot of requests, polite requests,” Carlson said Thursday. “She never demonstrated that a single actual vote was moved illegitimately by software from one candidate to another. Not one.”

Powell also alleged that Georgia Gov. Brian Kemp and Secretary of State Brad Raffensperger, both Republicans, were involved in a conspiracy with the state’s electronic voting system that swung the state in Biden’s favor.

“Mr. Kemp and the secretary of state need to go with it because they’re in on the Dominion scam,” she added, referring to a false claim that Dominion Voting Systems, which ran Georgia’s electronic voting system, deleted millions of Trump votes nationwide.

In a statement to CBS News Sunday night, Powell said that “understands” the Trump team’s press release, and will continue to stand for those who had their “voters for Trump and other Republicans stolen by massive fraud.”

Retired Gen. Michael Flynn, Powell’s former client, tweeted Sunday that Powell “has been suspended from Twitter for 12 hours. She understands the WH press release & agrees with it.”

“She is staying the course to prove the massive deliberate election fraud that robbed #WeThePeople of our votes for President Trump & other Republican candidates,” Flynn added.

Editor’s note: This post has been updated to reflect statements from Powell and Flynn.

What You Need to Know about Voter Turnout in the US