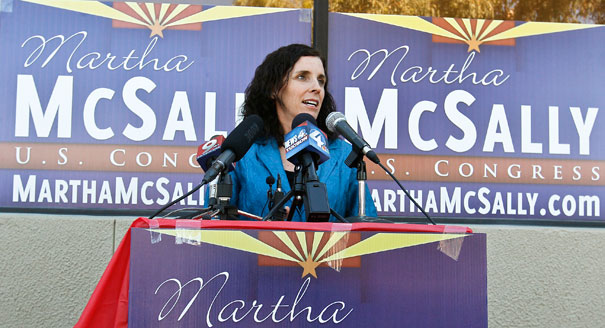 The FBI arrested an Arizona man for allegedly making threats against a congresswoman who supported President Donald Trump.

Martin allegedly told McSally he couldn’t wait to shoot her, threatened to strangle her, and warned her never to come back to the state in voice mails left between May 2 – May 10.

Martin admitted to the FBI that he made the threats because he was “venting frustrations with Congresswoman McSally’s congressional votes in support of the President of the United States,” the complaint revealed. The FBI managed to find Martin by tracing the cell phone he used to call McSally.

“Can’t wait to (expletive) pull the trigger (expletive). Your days are numbered,” Martin said in one voicemail, while in another he threatened “If I could ring your (expletive) neck. You need to get back to where you came from and leave Arizona.”

Martin was released on his own recognizance, but is ordered to stay away from McSally and cannot own a gun. He also has to wear an electronic monitoring device.

“Our community should be deeply disturbed by these threats of violence. Threatening to shoot a member of Congress between the eyes and stating that her days are numbered is sickening. It is especially sickening here in southeastern Arizona because we know, perhaps better than any congressional district in the country, what happens when threats of violence become acts of violence,” the statement read.

NYT: Israel the Source for Intel Trump Gave to Russians